Saint Ælfgifu of Shaftesbury, also known as Saint Elgiva[1] (died 944) was the first wife of Edmund I (r. 939–946), by whom she bore two future kings, Eadwig (r. 955–959) and Edgar (r. 959–975). Like her mother Wynflaed, she had a close and special if unknown connection with the royal nunnery of Shaftesbury (Dorset), founded by King Alfred,[2] where she was buried and soon revered as a saint. According to a pre-Conquest tradition from Winchester, her feast day is 18 May.[3][4]

Her mother appears to have been an associate of Shaftesbury Abbey called Wynflaed (also Wynnflæd). The vital clue comes from a charter of King Edgar, in which he confirmed the grant of an estate at Uppidelen (Piddletrenthide, Dorset) made by his grandmother (ava) Wynflæd to Shaftesbury.[5] She may well be the nun or vowess (religiosa femina) of this name in a charter dated 942 and preserved in the abbey's chartulary. It records that she received and retrieved from King Edmund a handful of estates in Dorset, namely Cheselbourne and Winterbourne Tomson, which somehow ended up in the possession of the community.[6]

Since no father or siblings are known, further speculation on Ælfgifu's background has largely depended on the identity of her mother, whose relatively uncommon name has invited further guesswork. H. P. R. Finberg suggests that she was the Wynflæd who drew up a will, supposedly sometime in the mid-10th century, after Ælfgifu's death. This lady held many estates scattered across Wessex (in Somerset, Wiltshire, Berkshire, Oxfordshire, and Hampshire) and was well connected with the nunneries at Wilton and Shaftesbury, both of which were royal foundations. On that basis, a number of relatives have been proposed for Ælfgifu, including a sister called Æthelflæd, a brother called Eadmær, and a grandmother called Brihtwyn.[7]

There is, however, no consensus among scholars about Finberg's suggestion. Simon Keynes and Gale R. Owen object that there is no sign of royal relatives or connections in Wynflæd's will and Finberg's assumptions about Ælfgifu's family therefore stand on shaky ground.[8] Andrew Wareham is less troubled about this and suggests that different kinship strategies may account for it.[9] Much of the issue of identification also seems to hang on the number of years by which Wynflæd can plausibly have outlived her daughter. In this light, it is significant that on palaeographical grounds, David Dumville has rejected the conventional date of c. 950 for the will, which he considers “speculative and too early” (and that one Wynflæd was still alive in 967).[10]

The sources do not record the date of Ælfgifu's marriage to Edmund. The eldest son Eadwig, who had barely reached majority on his accession in 955, may have been born around 940, which gives us only a very rough terminus ante quem for the betrothal. Although as the mother of two future kings, Ælfgifu proved to be an important royal bed companion, there is no strictly contemporary evidence that she was ever consecrated as queen. Likewise, her formal position at court appears to have been relatively insignificant, overshadowed as it was by the queen mother Eadgifu of Kent. In the single extant document witnessed by her, a Kentish charter datable between 942 and 944, she subscribes as the king's concubine (concubina regis), with a place assigned to her between the bishops and ealdormen. By comparison, Eadgifu subscribes higher up in the witness list as mater regis, after her sons Edmund and Eadred but before the archbishops and bishops.[11] It is only towards the end of the 10th century that Æthelweard the Chronicler styles her queen (regina), but this may be a retrospective honour at a time when her cult was well established at Shaftesbury. 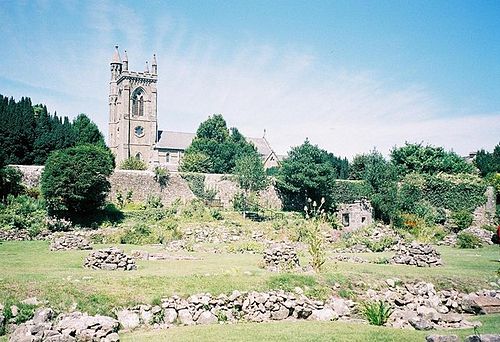 The remains of the Norman buildings which replaced the earlier ones at Shaftesbury Abbey.

Much of Ælfgifu's claim to fame derives from her association with Shaftesbury. Her patronage of the community is suggested by a charter of King Æthelred, dated 984, according to which the abbey exchanged with King Edmund the large estate at Tisbury (Wiltshire) for Butticanlea (unidentified). Ælfgifu received it from her husband and intended to bequeath it back to the nunnery, but such had not yet come to pass (her son Eadwig demanded that Butticanlea was returned to the royal family first).[12]

Ælfgifu predeceased her husband in 944.[13] In the early 12th century, William of Malmesbury wrote that she suffered from an illness during the last few years of her life, but there may have been some confusion with details of Æthelgifu's life as recorded in a forged foundation charter of the late 11th or 12th century (see below).[14] Her body was buried and enshrined at the nunnery.[15]

Ælfgifu was venerated as a saint soon after her burial at Shaftesbury. Æthelweard reports that many miracles had taken place at her tomb up to his day,[16] and these were apparently attracting some local attention. Lantfred of Winchester, who wrote in the 970's and so can be called the earliest known witness of her cult, tells of a young man from Collingbourne (possibly Collingbourne Kingston, Wiltshire), who in the hope of being cured of blindness travelled to Shaftesbury and kept vigil. What led him there was the reputation of “the venerable St Ælfgifu […] at whose tomb many bodies of sick person receive medication through the omnipotence of God”.[17] Despite the new prominence of Edward the Martyr as a saint interred at Shaftesbury, her cult continued to flourish in later Anglo-Saxon England, as evidenced by her inclusion in a list of saints' resting places, at least 8 pre-Conquest calendars and 3 or 4 litanies from Winchester.[18]

Ælfgifu is styled a saint (Sancte Ælfgife) in the D-text of the Anglo-Saxon Chronicle (mid-11th century) at the point where it specifies Eadwig's and Edgar's royal parentage.[19] Her cult may have been fostered and used to enhance the status of the royal lineage, more narrowly that of her descendants.[20] Lantfred attributes her healing power both to her own merits and those of her son Edgar. It may have been due to her association that in 979 the supposed body of her murdered grandson Edward the Martyr was exhumed and in a spectacular ceremony, received at the nunnery of Shaftesbury, under the supervision of ealdorman Ælfhere.[21]

Ælfgifu's fame at Shaftesbury seems to have eclipsed that of its first abbess, King Alfred's daughter Æthelgifu,[22] so much so perhaps that William of Malmesbury wrote contradictory reports on the abbey's early history. In the Gesta regum, he correctly identifies the first abbess as Alfred's daughter, following Asser, although he gives her the name of Ælfgifu (Elfgiva),[23] while in his Gesta pontificum, he credits Edmund's wife Ælfgifu with the foundation.[24] Either William encountered conflicting information, or he meant to say that Ælfgifu refounded the nunnery.[25] In any event, William would have had access to local traditions at Shaftesbury, since he probably wrote a now lost metrical Life for the community, a fragment of which he included in his Gesta pontificum:[26]