From Infogalactic: the planetary knowledge core
Jump to: navigation, search
For the Italian commune, see Claviere.

Étienne Clavière (27 January 1735 – 8 December 1793) was a Swiss-born French financier and politician of the French Revolution. 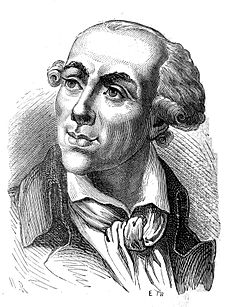 A native of Geneva, he became one of the democratic leaders of the Geneva Republic, and in 1782 was forced to take refuge to the Kingdom of Great Britain, after the armed interference of France, the Kingdom of Sardinia and Berne in favour of the patrician party.

There, he met other Swiss, among them Jean-Paul Marat and Étienne Dumont, but their plans for a new Geneva in Ireland —which the government of William Pitt the Younger favoured— were given up when Jacques Necker came to power in France, and Clavière, with most of his comrades, went to Paris.

In 1789, he and Dumont allied themselves with Honoré Mirabeau, secretly collaborating for him on the Courrier de Provence and also preparing speeches for Mirabeau to deliver - this association with Clavière sustained Mirabeau's reputation as a financier. He was one of the members of the Abolitionism in France Society of the Friends of the Blacks and of the Jacobin Club.

Clavière also published some pamphlets under his own name, and through these and his friendship with Jacques Pierre Brissot, whom he had met in London, he was Minister of Finance in the Girondist ministry, from March to 12 June 1792 (as a suppleant member of the Legislative Assembly for Seine, and supported by Jacques Pierre Brissot).

After 10 August (the storming of the Tuileries Palace) he was again given charge of the finances in the provisional executive council, but could not offer a remedy to France's difficulties. Clavière shared in the fall of the Girondists, being arrested on 2 June 1793, but, for unknown reasons, was not placed on trial with the rest in October. He remained in prison until 8 December, when, on receiving notice that he was to appear on the next day before the Revolutionary Tribunal, he committed suicide.