Ñuble Province (Spanish: Provincia de Ñuble) is one of four provinces of the Chilean region of Bío Bío (VIII). It spans an area of 13,178.5 km2 (5,088 sq mi) and is administratively constituted by 21 communes. It has a population of 441,604 inhabitants. Its capital is the city of Chillán.

Following the 8.8 magnitude earthquake and tsunami, at least eight small communities and two towns were abandoned by residents, who took up makeshift camps in the hills, fearful of further tsunamis. Over 800 residences in the town of Quirihue were destroyed, leaving little for townspeople to return to.[4]

Ñuble has a lot of attractions for tourists, including:

Other places of interest are the Market and Fair of Chillán, one of the more beautiful and important artisan centers of Chile. Murals by Siqueiros were donated by the Government of Mexico. There is also Bernardo O'Higgins Monumental Park in the locality of Old Chillán.

Among the activities characteristic of Ñuble are crafts, in particular in the localities of Quinchamalí (considered like one of the country's more important places of artisan production of white clay pottery), Coihueco (characterized by the wood carvings and loom weaving), Ninhue and San Fabián de Alico.

In recent years the province of Ñuble has consolidated an important forest sector, thanks to favorable climatic conditions land for the development of plantations of such rapidly growing trees as pinus radiata and eucalyptus globulus.

Ñuble has a variety of celebrations and events. Outstanding among these are the Rodeo, a celebration huasa that takes place between September and February. The Agro-Expo of San Carlos is an agricultural, cattle and artisan exhibition, with strong accent on dairying.

The province has the pride of being the home of patriots, artists and other men of note, including, Bernardo O'Higgins, Arturo Prat, Claudio Arrau, Ramón Vinay, and Violeta Parra.

Chillán, the capital of Ñuble, may be reached by the following routes:

As a province, Ñuble is a second-level administrative division of Chile, governed by a provincial governor who is appointed by the president.

The province comprises 21 communes, each governed by a municipality consisting of an elected alcalde and municipal council.

The Itata Valley is a wine region in southern Chile and a Denomination of Origin (DO) is defined by the Chilean Appellation system, the legally defined and protected geographical indication used to identify where the grapes for a wine were grown. The valley is located in the province of Ñuble, 420 kilometres (250 mi) from Santiago, the capital of Chile, and 65 kilometres (40 mi) of the major port of Concepción. It is the northernmost of Chile’s three southern wine regions and stretches roughly 60 miles (100 km) from north to south and a similar distance from east to west, but although it is extensive, it has a low density of vineyard plantations. The area is defined by the convergence of the Itata and Ñuble Rivers, and vineyards plantations are mostly found around the towns of Chillan, Quillon and Coelemu. The valley’s western border is the Pacific Ocean, which has a cooling influence over the valley due the cold Humboldt current that runs along most of Chile’s coastline. The cool Mediterranean climate suits Pais, Muscat of Alexandria and Carignan vines, and more recently, producers have begun to plant more modern grape varieties like Cabernet Sauvignon.

The soils are alluvial, made up of sand and clay from the Itata and Ñuble rivers. The region is located at a latitude of 36°S, a similar distance from the Equator as southern Spain or the central valley of California.[5] 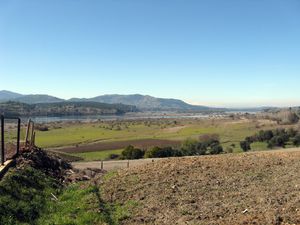