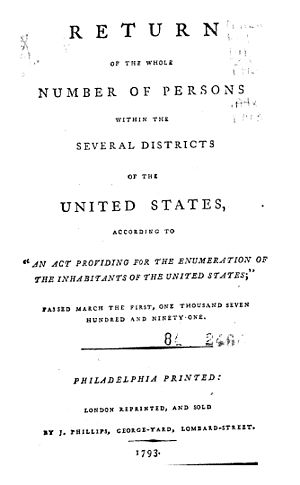 Congress assigned responsibility for the 1790 census to the marshals of United States judicial districts under an act which, with minor modifications and extensions, governed census taking through 1840. "The law required that every household be visited, that completed census schedules be posted in 'two of the most public places within [each jurisdiction], there to remain for the inspection of all concerned...' and that 'the aggregate amount of each description of persons' for every district be transmitted to the president."[2]

Although the Census was proved statistically factual, based on data collected, the records for several states (including: Delaware, Georgia, New Jersey, and Virginia) were lost sometime between 1790 and 1830.[3] Almost one third of the original census data have been lost or destroyed since their original documentation. These include the 1790 data from: Connecticut, Maine, Maryland, Massachusetts, New Hampshire, New York, North Carolina, Pennsylvania, Rhode Island, South Carolina, and Vermont; however, the validity and existence of most of these data can be confirmed in many secondary sources pertaining to the first census.[4]

Census data included the name of the head of the family and categorized inhabitants as follows: free white males at least 16 years of age (to assess the country's industrial and military potential), free white males under 16 years of age, free white females, all other free persons (reported by sex and color), and slaves.[5] Under the direction of the current Secretary of State Thomas Jefferson, marshals collected data from all thirteen states (Connecticut, Delaware, Georgia, Maryland, Massachusetts, New Hampshire, New Jersey, New York, North Carolina, Pennsylvania, Rhode Island, South Carolina, and Virginia), from the districts and territories that would become the states of Kentucky and Tennessee. Maine was at that time a part of Massachusetts, and so was included.[2] The census was conducted in Vermont in 1791, after that state's admission to the Union as the 14th state earlier that year. (Vermont had already been functioning as a state without recognition since 1777, but was not admitted to the Union until March 1791.)

Based upon the population enumeration provided by the 1790 Census, the 2nd Congress passed legislation which increased the size of the United States House of Representatives from 69 seats in the 2nd Congress to 105 in the 3rd and apportioned those seats among the several states accordingly. 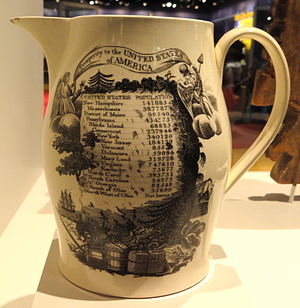 Both Secretary of State Thomas Jefferson and President George Washington expressed skepticism[6] over the results, believing that the true population had been undercounted. If there was indeed an undercount, possible explanations for it include dispersed population, poor transportation links, limitations of contemporary technology, and individual refusal to participate.

No microdata from the 1790 population census are available, but aggregate data for small areas, together with compatible cartographic boundary files, can be downloaded from the National Historical Geographic Information System.