The 1992 Summer Olympic Games (Spanish: Juegos Olímpicos de Verano de 1992; Catalan: Jocs Olímpics d'estiu de 1992), officially known as the Games of the XXV Olympiad, was an international multi-sport event played in Barcelona, Catalonia, Spain in 1992. Beginning in 1994, the International Olympic Committee decided to hold the games in alternating even-numbered years; as a result, the 1992 Summer Olympics were the last competition to be staged in the same year as the Winter Olympics.[1] The games were the first to be unaffected by boycotts since 1972.[2]

Barcelona is the second-largest city in Spain, and the birthplace of then-IOC president Juan Antonio Samaranch. The city was also host for the 1982 FIFA World Cup. On October 17, 1986, Barcelona was selected to host the 1992 Summer Games over Amsterdam, Belgrade, Birmingham, Brisbane, and Paris, during the 91st IOC Session in Lausanne, Switzerland.[3] Barcelona had previously bid for the 1936 Summer Olympics, but they ultimately lost to Berlin. 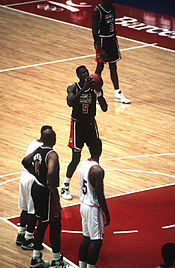 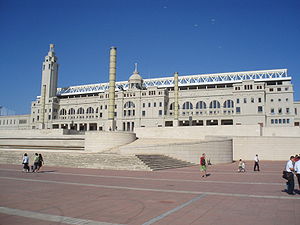 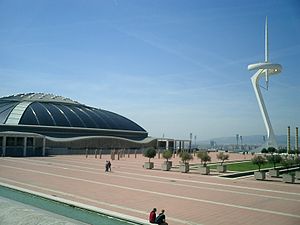 The 1992 Summer Olympic programme featured 257 events in the following 25 sports:

All times are in Central European Summer Time (UTC+2)

Participating countries by number of competitors

A total of 169 nations sent athletes to compete in the 1992 Summer Games.

With the dissolution of the Soviet Union, twelve of the fifteen new states formed a Unified Team, while the Baltic States of Estonia, Latvia and Lithuania each had their own teams for the first time since 1936. For the first time, Croatia, Slovenia and Bosnia-Herzegovina competed as independent nations after their separation from Socialist Yugoslavia, and Namibia and the unified team of Yemen (previously North and South Yemen) also made their Olympic debuts.

The Federal Republic of Yugoslavia was banned due to UN sanctions, but individual Yugoslav athletes were allowed to take part as Independent Olympic Participants. Four National Olympic Committees did not send any athletes to compete: Afghanistan, Brunei, Liberia and Somalia.

The following table reflects the top ten nations in terms of total medals won at the 1992 Games (the host nation is highlighted).

The 1992 Summer Olympics were covered in many countries by the following television and radio broadcasters:[17]

Effect on the city

The celebration of the 1992 Olympic Games had an enormous impact on the urban culture and external projection of Barcelona. The Games provided billions of dollars for infrastructure investments, which are considered to have improved the quality of life and attraction of the city for investment and tourism.[18] Barcelona became one of the most visited cities in Europe after Paris, London, and Rome.[19][20]

Barcelona's nomination for the 1992 Summer Games sparked the application of a previously elaborated ambitious urban plan.[21] Barcelona opened to the sea with the construction of the Olympic Village and Olympic Port in Poblenou. New centres were created, and modern sports facilities were built in the Olympic zones of Montjuïc, Diagonal, and Vall d'Hebron. Hotels were also either built or refurbished. The construction of ring roads around the city helped reduce the density of the traffic, and El Prat airport was modernized and expanded as two new terminals were opened.[22]

The 1992 Summer Olympics cost Barcelona a total of USD 11.4 billion (in 2009 dollars), with a cost overrun of 417 percent in real terms. This compares with an average cost of USD 5.7 billion (in 2009 dollars) for other Summer Olympics over the past 50 years, with an average cost overrun of 252 percent. Costs here includes only sports-related costs and does not include other public costs including road, rail, or airport infrastructure; and private costs, such as hotel upgrades or other business investments incurred during the preparation for the Games. Though the non-sports-related costs are typically substantial, their necessity varies drastically from city to city. Therefore, they are difficult to compare consistently.[23]

There were two main musical themes for the 1992 Games. One was "Barcelona", composed five years earlier by Freddie Mercury and sung as a duet with Montserrat Caballé. Due to Mercury's death eight months earlier, the duo was unable to perform the song during the opening ceremony. A recording of the song instead played over a travelogue of the city at the start of the opening ceremony.[24] "Amigos Para Siempre" (Friends for Life) was the other musical theme. It was written by Andrew Lloyd Webber and Don Black, and sung by Sarah Brightman and José Carreras during the closing ceremonies.

Ryuichi Sakamoto composed and conducted the opening ceremony musical score.[25] The Opening Olympic fanfare was composed by Angelo Badalamenti and with orchestrations by Joseph Turrin.

The official mascot was Cobi, a Catalan sheepdog in cubist style designed by Javier Mariscal.[26]

A renewal in Barcelona's image and corporate identity could be seen in the publication of posters, commemorative coins, stamps minted by the FNMT in Madrid, and the Barcelona 1992 Olympic Official Commemorative Medals, designed and struck in Barcelona.