1995 enlargement of the European Union 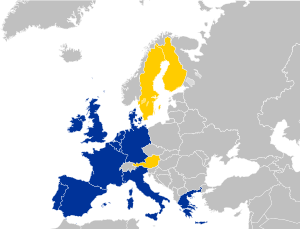 The 1995 enlargement: Austria, Finland and Sweden in yellow.

The 1995 enlargement of the European Union saw Austria, Finland and Sweden accede to the European Union (EU). This was the EU's fourth enlargement and came into effect on the 1 January of that year. All these states were previous members of the European Free Trade Association (EFTA) and had traditionally been less interested in joining the EU than other European countries. Norway had negotiated to join alongside the other three but following the signing of the treaty, membership was turned down by the Norwegian electorate in the 1994 national referendum. Switzerland also applied for membership on 26 May 1992, but withdrew it after a negative referendum result on 6 December 1992 (and that was not changed after a second negative referendum result on 4 March 2001).

The three states, plus Norway and Switzerland (which never joined due to their referendum results) began to look at stronger ties with the EU (which was the European Economic Community (EEC) before 1993) towards the end of the 1980s for three principal reasons: the 1980s economic downturn in Europe, difficulties for EFTA companies to export to the EU and the end of the Cold War.[1]

After the 1970s Europe experienced a downturn which led to leaders launching of the Single European Act which set to create a single market by 1992. The effect of this was that EFTA states found it harder to export to the EEC and businesses (including large EFTA corporations such as Volvo) wished to relocate within the new single market making the downturn worse for EFTA. EFTA states began to discuss closer links with the EEC despite its domestic unpopularity.[1]

Finally, Austria, Finland and Sweden were neutral in the Cold War so membership of an organisation developing a common foreign and security policy would be incompatible with that. As that obstacle was removed, the desire to pursue membership grew stronger.[1]

However membership was still domestically unpopular and the then-EEC was also uninterested in another enlargement. The EEC had begun working on the creation of a common currency and did not want another enlargement to divert their attention away from that project. Commission President Jacques Delors proposed the European Economic Area to give EFTA access to the EU's internal market without full membership. While they would not have a say in the creation of EU law, it would be easier to sell to their electorates.[1]

However businesses did not accept that the EEA members would be equal members of the single market and investment flows did not return to normal. The large manufacturers in Sweden were instrumental in pushing government policy further towards membership rather than remaining with the EEA, which the export focused industries found insufficient. The economic pressures overcame long standing opposition from the social democrat governments which saw the EU as too neo-liberal and a danger to Nordic capitalism. Firms were only kept within Sweden by devaluations of the Swedish krona, a strategy which was unsustainable in the long term.[1]

The EEA was damaged further with the Swiss electorate voted against it. Austria, Finland, Norway and Sweden all applied for full membership of the EU and the EU agreed to enter negotiations. The EU's change of heart was also due to predicted enlargement of the EU towards countries mostly in central Europe, invited by the European Commission in 1997, and hence the wealthy EFTA members would help balance the EU budget.[1]

On 30 March 1994, accession negotiations concluded with Austria, Sweden, Finland and Norway. Their accession treaties were signed on 25 June of that year. Each country held referendums on entry resulting on entry for all except Norway (its second failed referendum);

Austria, Finland and Sweden became EU members on 1 January 1995. Sweden held their elections to the European Parliament for its MEPs later that year on 17 September. The following year, Austria held its elections on 13 October and Finland on 20 October.

The impact of the 1995 enlargement was smaller than most as the members were wealthy and already culturally aligned with existing members. It did however create a Nordic block in the Council, with Sweden and Finland backing up Denmark on environmental and human rights issues (which Austria also backed up) and the Nordic countries also called for membership of the Baltic states. As net contributors to the EU budget, they also increased the voice for budgetary reform.[1]

This enlargement began to show the problems with the EU's institutional structure, such as the size of the Commission (with minor jobs insulting the state receiving them) and the Council's voting rules meaning states representing 41% of the population could be outvoted. This resulted in the increase in the blocking minority in the Council and the loss of the larger states' second European Commissioner. Planning also began on new amending treaties to ready the block for the next enlargement.[1]