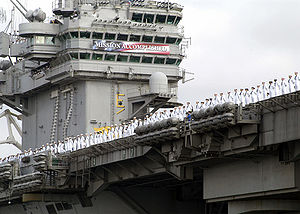 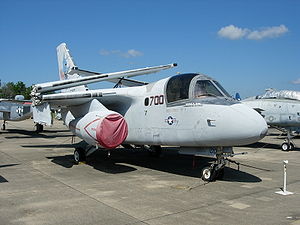 The S-3B Viking "Navy One" was retired and put in display at the National Museum of Naval Aviation.[1]
File:George W. Bush walks with Ryan Phillips to Navy One.jpg
President Bush, with NFO Lt. Ryan Philips, in the flight suit he wore for his televised arrival on the USS Abraham Lincoln 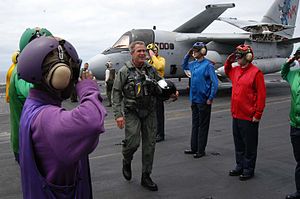 President George W. Bush on the Abraham Lincoln being saluted by the flight deck crew

The 2003 Mission Accomplished speech gets its name from a banner that read "Mission Accomplished" displayed on the aircraft carrier USS Abraham Lincoln during a televised address by United States President George W. Bush on May 1, 2003 and the controversy that followed.

Bush stated at the time that this was the end to major combat operations in Iraq. Bush's assertion—and the sign itself—became controversial after guerrilla warfare in Iraq increased during the Iraqi insurgency. The vast majority of casualties, both military and civilian, occurred after the speech.[2]

On May 1, 2003, Bush became the first sitting President to arrive in an arrested landing in a fixed-wing aircraft on an aircraft carrier[3][4] when he arrived at the USS Abraham Lincoln in a Lockheed S-3 Viking, dubbed Navy One, as the carrier lay just off the San Diego coast, having returned from combat operations in the Persian Gulf. He posed for photographs with pilots and members of the ship's crew while wearing a flight suit. A few hours later, he gave a speech announcing the end of major combat operations in the Iraq War. Far above him was the warship's banner stating "Mission Accomplished."

Writing in The Wall Street Journal Lisa Schiffren, a former speechwriter for former vice president Dan Quayle, praised Bush for appearing not only “really hot” but “credible as a commander in chief. But mostly 'hot' as in virile, sexy and powerful.”[5] However, Bush was criticized for the historic jet landing on the carrier as an overly theatrical and expensive stunt. For instance, it was pointed out that the carrier was well within range of Bush's helicopter, and that a jet landing was not needed.[6] Originally the White House had stated that the carrier was too far off the California coast for a helicopter landing and a jet would be needed to reach it. On the day of the speech, the Lincoln was only 30 miles (48 km) from shore but the administration still decided to go ahead with the jet landing. White House spokesman Ari Fleischer admitted that Bush "could have helicoptered, but the plan was already in place. Plus, he wanted to see a landing the way aviators see a landing."[7] The Lincoln made a scheduled stop in Pearl Harbor shortly before the speech, docked in San Diego after the speech, and returned to her home port in Everett, Washington on May 6, 2003.

The S-3 that served as "Navy One" was retired from service and placed on display at the National Museum of Naval Aviation in Pensacola, Florida on July 17, 2003. The museum makes it clear that Bush was a passenger – not the pilot – of the plane.[1] While Bush trained and served as a jet pilot in the Air National Guard flying F-102 fighter-interceptors, he was never trained to land on a carrier.

The banner stating "Mission Accomplished" was a focal point of controversy and criticism. Navy Commander and Pentagon spokesman Conrad Chun said the banner referred specifically to the aircraft carrier's 10-month deployment (which was the longest deployment of a carrier since the Vietnam War) and not the war itself, saying "It truly did signify a mission accomplished for the crew."[8]

The White House claimed that the banner was requested by the crew of the ship, who did not have the facilities for producing such a banner. Afterward, the administration and naval sources stated that the banner was the Navy's idea, White House staff members made the banner, and it was hung by the U.S. Navy personnel. White House spokesman Scott McClellan told CNN, "We took care of the production of it. We have people to do those things. But the Navy actually put it up."[9] According to John Dickerson of Time magazine, the White House later conceded that they hung the banner but still insists it had been done at the request of the crew members.[10]

Whether meant for the crew or not, the general impression created by the image of Bush under the banner has been criticized as premature, especially later as the guerrilla war began. Subsequently, the White House released a statement saying that the sign and Bush's visit referred to the initial invasion of Iraq. Bush's speech noted:

"We have difficult work to do in Iraq. We are bringing order to parts of that country that remain dangerous."[11]
"Our mission continues...The War on Terror continues, yet it is not endless. We do not know the day of final victory, but we have seen the turning of the tide."

The speech also said that:

"In the Battle of Iraq, the United States and our allies have prevailed."[11]

When he received an advance copy of the speech, U.S. Defense Secretary Donald Rumsfeld took care to remove any use of the phrase "Mission Accomplished" in the speech itself. Later, when journalist Bob Woodward asked him about his changes to the speech, Rumsfeld responded: "I was in Baghdad, and I was given a draft of that thing to look at. And I just died, and I said my God, it's too conclusive. And I fixed it and sent it back... they fixed the speech, but not the sign."[12]

Bush did offer a "Mission Accomplished" message to the troops in Afghanistan at Camp As Sayliyah on June 5, 2003 – about a month after the aircraft carrier speech: "America sent you on a mission to remove a grave threat and to liberate an oppressed people, and that mission has been accomplished."[13]

For critics of the war, the photo-op became a symbol of the Bush administration's unrealistic goals and perceptions of the conflict. Anti-war activists questioned the integrity and realism of Bush's "major combat" statement. The banner came to symbolize the irony of Bush giving a victory speech only a few weeks after the beginning of a relatively long war. Many in the administration came to regret the slogan. Karl Rove later stated, "I wish the banner was not up there."[14]

In a less publicized incident, Rumsfeld also declared an end to major combat operations in Afghanistan on May 1, a few hours before Bush's announcement.[15]

In November 2008, Bush indicated that he regretted the use of the banner, stating in a CNN interview, "To some, it said, well, 'Bush thinks the war in Iraq is over,' when I didn't think that. It conveyed the wrong message."[16]

In January 2009, Bush said that "Clearly, putting 'Mission Accomplished' on an aircraft carrier was a mistake".[17]

Iraq War opponents have used the phrase "mission accomplished" in an ironic sense, while others have non-politically cited it as an example of a general public relations failure. In addition, some mainstream outlets questioned the state of the war with derivatives of this statement. For example, the October 6, 2003 cover of Time featured the headline "Mission Not Accomplished."[22] On April 30, 2008, White House Press Secretary Dana Perino said "President Bush is well aware that the banner should have been much more specific and said 'mission accomplished for these sailors who are on this ship on their mission.' And we have certainly paid a price for not being more specific on that banner."[23] On May 5, 2008, The Daily Show mocked her statement by producing a graphic of what such a sign might have looked like.[24]

American deaths in the Iraq War totalled 104 when President Bush gave his Mission Accomplished speech. After that speech another 3,424 Americans were killed in the Iraq War (as of February 2011, when American combat operations there halted).[25]