2004 enlargement of the European Union 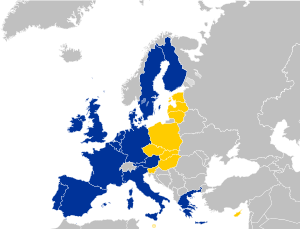 The simultaneous accessions concerned the following countries, sometimes referred to as the "A10" countries: [1][2] Cyprus, the Czech Republic, Estonia, Hungary, Latvia, Lithuania, Malta, Poland, Slovakia, and Slovenia. Seven of these were part of the former Eastern Bloc (of which three were from the former Soviet Union and four were and still are members of the Central European alliance Visegrád Group), one of the former Yugoslavia (together sometimes referred to as the "A8" countries), and the remaining two were Mediterranean islands and former British colonies.

Part of the same wave of enlargement was the accession of Bulgaria and Romania in 2007, who were unable to join in 2004, but, according to the Commission, constitute part of the fifth enlargement.

With the end of the Second World War in 1945, Europe found itself divided between a capitalist Western Bloc and a communist Eastern Bloc, as well as Third World neutral countries. The European Economic Community (EEC) was created in 1957 between six countries within the Western Bloc and later expanded to twelve countries across Europe. European communist countries had a looser economic grouping with the USSR known as Comecon. To the south there was a non-aligned communist federated country - Yugoslavia.

In 1989, the Cold War between the two superpowers was coming to an end, with the USSR's influence over communist Europe collapsing. As the communist states began their transition to free market democracies, aligning to Euro-Atlantic integration, the question of enlargement into the continent was thrust onto the EEC's agenda.

The Phare strategy was launched soon after to adapt more the structure of the Central and Eastern European countries (Pays d'Europe Centrale et Orientale (PECO)) to the European Economic Community. One of the major tools of this strategy was the Regional Quality Assurance Program (Programme Régional d'Assurance Qualité (PRAQ)) which started in 1993 to help the PECO States implement the New Approach in their economy.[3]

The Acquis Communautaire contained 3,000 directives and some 100,000 pages in the Official Journal of the European Union to be transposed. It demanded a lot of administrative work and immense economic change, and raised major cultural problems – e.g. new legal concepts and language consistency problems. 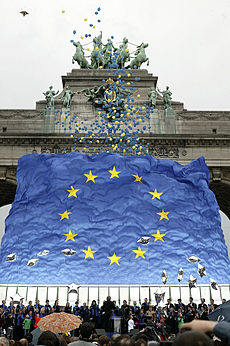 Celebration in the Parc du Cinquantenaire in Brussels 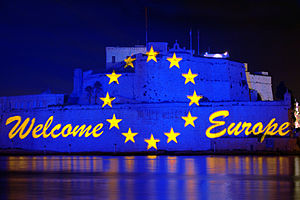 The Treaty of Accession 2003 was signed on 16 April 2003, at the Stoa of Attalus in Athens, Greece, between the then-EU members and the ten acceding countries. The text also amended the main EU treaties, including the Qualified Majority Voting of the Council of the European Union. The treaty was ratified on time and entered into force on 1 May 2004 amid ceremonies around Europe.

European leaders met in Dublin for fireworks and a flag-raising ceremony at Áras an Uachtaráin, the Irish presidential palace. At the same time, citizens across Ireland enjoyed a nationwide celebration styled as the Day of Welcomes. President Romano Prodi took part in celebrations on the Italian-Slovenian border at the divided town of Gorizia/Nova Gorica, at the German-Polish border, the EU flag was raised and Ode to Joy was sung and there was a laser show in Malta among the various other celebrations.[5]

1 EU Association Agreement type: Europe Agreement for the states of the Fifth Enlargement.

Further information: Freedom of movement for workers § Free movement rights of nationals of new member states
File:Polish Plumber.jpg
The "Polish Plumber" cliché adopted by Poland's tourism board to advertise Poland as a tourist destination on the French market. (English translation: "I am staying in Poland, come in large numbers")

As of May 2011, there are no longer any special restrictions on the free movement of citizens of these new member states.

Despite the fears, migration within the EU concerns less than 2% of the population.[9] However, the migration did cause controversy in those countries which saw a noticeable influx, creating the image of a "Polish Plumber" in the EU, caricaturing the cheap manual labour from A8 countries making an imprint on the rest of the EU. But the extent to which E8 immigration actually generated a lasting public backlash is debatable. Ten years after the enlargement, a study shows that increases in E8 migrants in Western Europe over the last ten years has actually been accompanied by a more widespread acknowledgement of the economic benefits of immigration.[10] Following the 2007 enlargement, most countries placed restrictions on the new states, including the most open in 2004 (Ireland and the United Kingdom) with only Sweden, Finland and the 2004 members (minus Malta and Hungary).[11] But by April 2008, these restrictions on the eight members (they continued for Romania and Bulgaria) had been dropped by all members except Germany and Austria.[12]

Cyprus began talks to join the EU, which provided impetus to solve the dispute. With the agreement of the Annan Plan for Cyprus, it was hoped that the two countries would join the EU together as a single United Cyprus Republic. Turkish Cypriots supported the plan. However, in a referendum on 24 April 2004 the Greek Cypriots rejected the plan. Thus, a week later, the Republic of Cyprus joined the EU with political issues unresolved. Legally, as the northern republic is not recognised by the EU, the entire island is a member of the EU as part of the Republic of Cyprus, though the de facto situation is that the Government is unable to extend its controls into the occupied areas.

Efforts to reunite the island continue as of 2014.

Accession of Poland to the European Union took place in May 2004. Poland had been negotiating with the EU since 1989.

With the fall of communism in 1989/1990 in Poland, Poland embarked on a series of reforms and changes in foreign policy, intending to join the EU and NATO. On 19 September 1989 Poland signed the agreement for trade and trade co-operation with the (then) European Community (EC). Polish intention to join the EU was expressed by Polish Prime Minister Tadeusz Mazowiecki in his speech in the European Parliament in February 1990 and in June 1991 by Polish Minister of Foreign Affairs Krzysztof Skubiszewski in Sejm (Polish Parliament).

On 19 May 1990 Poland started a procedure to begin negotiations for an association agreement and the negotiations officially began in December 1990. About a year later, on 16 December 1991 the European Union Association Agreement was signed by Poland. The Agreement came into force on 1 February 1994 (its III part on the mutual trade relations came into force earlier on 1 March 1992).

As a result of diplomatic interventions by the central European states of the Visegrád group, the European Council decided at its Copenhagen summit in June 1993 that: "the associate member states from Central and Eastern Europe, if they so wish, will become members of the EU. To achieve this, however, they must fulfil the appropriate conditions." Those conditions (known as the Copenhagen criteria, or simply, membership criteria) were:

At the Luxembourg summit in 1997, the EU accepted the Commission's opinion to invited (Poland, Czech Republic, Hungary, Slovenia, Estonia and Cyprus) to start talks on their accession to the EU. The negotiation process started on 31 March 1998. Poland finished the accession negotiations in December 2002. Then, the Accession Treaty was signed in Athens on 16 April 2003 (Treaty of Accession 2003). After the ratification of that Treaty in the Polish European Union membership referendum, 2003, Poland and other 9 countries became the members of EU on 1 May 2004.

12 years after the enlargement, the EU is still "digesting" the change. The influx of new members has effectively put an end to the Franco-German engine behind the EU, as its relatively newer members, Poland and Sweden, set the policy agenda, for example Eastern Partnership. Despite fears of paralysis, the decision making process has not been hampered by the new membership and if anything the legislative output of the institutions has increased, however justice and home affairs (which operates by unanimity) has suffered. In 2009 the Commission sees the enlargement as a success, however until the enlargement is fully accepted by the public future enlargements may be slow in coming.[12] In 2012 data published by the Guardian shows that that process is complete.[13]

The internal impact has also been relevant. The arrival of additional members has put an additional stress on the governance of the Institutions, and increased significantly overheads (for example, through the multiplication of official languages). Furthermore, there is a division of staff, since the very same day of the enlargement was chosen to enact an in-depth reform of the Staff Regulation, which was intended to bring significant savings in administrative costs. As a result, employment conditions (career & retirement perspectives) worsened for officials recruited after that date. Since by definition officials of the "new" Member States were recruited after the enlargement, these new conditions affected all of them (although they also affect nationals of the former 15 Member States who have been recruited after 1.5.2004).