Kurt Busch, driving the No. 2 car for Penske Racing, won the race[5] while Jamie McMurray for Earnhardt Ganassi Racing (whose team won the Indianapolis 500) finished second. The race had 17 different leaders, 34 lead changes, and eight cautions.[6] 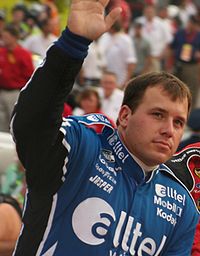 In qualifying, Ryan Newman won the pole position,[1] while Kurt Busch, Martin Truex, Jr., Kasey Kahne, and Jimmie Johnson completed the top-five positions. During qualifying, Brad Keselowski and David Ragan both spun, but Keselowski collided with the wall. Four drivers did not make the race; they were Reed Sorenson, Max Papis, David Stremme, and Mike Bliss.[11]

At 5:00 p.m. EDT, Fox started broadcasting;[12] the race would be the last they would broadcast until the 2011 Daytona 500.[4] At the start of the race, the weather was predicted to be mostly cloudy. At 6:55 p.m. EDT, pre-race ceremonies began; first, Dr. James Dobson, founder of Focus on the Family, delivered the invocation. Afterward, the track hosted a moment of silence. Then, the national anthem, was performed by the U.S. National Guard choir. To start engines, John Faulkenbury, President of the USO, N.C. joined by the Dickens (USMC), Foley (U.S. Army) and Barnes (U.S. Air Force) gave the command "Gentlemen, Start Your Engines!"[12]

At 6:20 p.m., the green flag waved as Ryan Newman led the field down to the start/finish line. On lap 3, Jimmie Johnson said that he believed there was oil on the track. Outside polesitter Kurt Busch passed Newman a short time later and pulled away from Newman with a 2.30-second advantage by lap 24. On lap 29, Busch started putting cars a lap down. Green flag pit stops began on lap 50 when Kasey Kahne pitted. On lap 52, Busch gave the lead to Joey Logano when he made his pit stop. Two laps later, Busch reclaimed the lead. The first caution of the race came out on lap 61 Juan Pablo Montoya spun and hit the inside wall. Denny Hamlin stayed off pit road, while most drivers pitted.[12]

The race started on lap 66, with Hamlin in the lead. A lap later, Kurt Busch retook the lead from Hamlin. The second caution came out on lap 91 Marcos Ambrose collided with the wall. Most leaders would pitt under this caution. The race started on lap 95 with Jimmie Johnson in the lead. A lap later, Kurt Busch passed him for the lead, but couldn't keep it. So Johnson retook the lead and remained there until lap 130, when Kyle Busch took it. Three laps later, the race passed its 200-mile mark. On lap 144, another round of green flag pit stops began. The different leaders during pit stops were Ku. Busch and Jamie McMurray, but Ky. Busch reclaimed the lead on lap 150. The third caution came out on lap 166 when Johnson got loose, collided with the outside wall, came down the track, and shoved Hamlin in the grass. Most lead lap cars pitted but during the yellow-flag pit stops, Ky. Busch collided with Brad Keselowski while exiting pit road.[12] 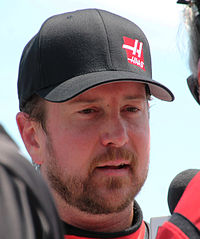 On the restart, Kurt Bush led them to the green flag. Afterwards, he led until lap 213, when the fourth caution came out for debris. The restart happened on lap 217, with Clint Bowyer the new leader. One lap later, Kurt Busch reclaimed the lead. Kurt Busch led until green flag pit stops which began on lap 264. On lap 267, David Reutimann passed Kurt Busch for the lead. Two laps later, Reutimann pitted, giving the lead to Matt Kenseth. On lap 272, the fifth caution came out. The cause of the caution was that Jimmie Johnson got loose, spun around, collided with the outside wall, then he went down the track and hit the inside wall; his car sustained heavy damage. On lap 277, Matt Kenseth brought the field to the restart. One lap later, Kurt Busch, from a fast start, passed Kenseth.[12]

Kurt Busch led the race until lap 299 when Jamie McMurray passed him. One lap later, Robby Gordon collided with the wall, and brought out a caution. During pit stops, Brad Keselowski stayed out to lead a lap, then he gave the lead to Kurt Busch when he pitted. Two laps after the 306 restart, the seventh caution came out because Greg Biffle collided with the wall. On lap 313, Kurt Busch brought the field for the restart. After chasing down Kurt Busch, Jamie McMurray finally reclaimed the lead. On lap 350, green flag pit stops began; one lap later Jamie McMurray and Kurt Busch pits, giving the lead back to David Reutimann. On lap 353, Reutimann pitted and gave the lead to Tony Stewart, then he pitted to give the lead to David Ragan and Dale Earnhardt, Jr. Earnhardt, Jr. stayed out until lap 366, when he pitted. Jamie McMurray was the leader afterwards. On lap 376, the eighth caution came out because Marcos Ambrose lost control and collided with the wall. During pit stops, Jeff Gordon and Mark Martin stayed out, to start first and second on the restart on lap 381. One lap later, Kurt Busch surged by the field to become the leader. Kurt Busch remained the leader to win his second race in the 2010 season.[12]