The 2013 Boston Marathon took place in Boston, Massachusetts on Monday April 15, 2013. It was the 117th edition of the mass-participation marathon. Organized by the Boston Athletic Association, it was the second of the World Marathon Majors series to be held in 2013. Over 23,000 runners participated. Lelisa Desisa won the men's division with a time of 2:10:22. Rita Jeptoo won the women's division with a time of 2:26:25. More than $800,000 of prize money was awarded.[1]

The marathon was disrupted by two consecutive explosions on the sidewalk near the finish line, killing three spectators and injuring 264 others.[2] The race was halted, preventing many from finishing. The explosions, later revealed to be bombings, received widespread international media attention.

After 26 seconds of silence to honor the victims of the Sandy Hook Elementary School shooting, the marathon got underway with 52 wheelchair competitors leaving Hopkinton at 9:17 am EDT. At 9:30 am, 51 elite women left the starting line, followed by the elite men at 10 am. The remaining competitors were released in three waves over the next 40 minutes.[3] In total, 23,336 competitors, from all 50 states plus Washington D.C. and Puerto Rico, and from 92 countries, started the marathon.[4] The temperature at start time was in the upper 40s °F (8–10 °C) range and climbed to 54 °F (12 °C) at the finish.[3]

Twenty-three-year-old Lelisa Desisa of Ethiopia beat out two other runners in a three-way sprint to finish first in the men's division.[3] It was his first win at Boston and just his second ever marathon.[1][3] Desisa took home $150,000 and an olive wreath crown. His time of 2 hours, 10 minutes and 22 seconds was five seconds ahead of second-place finisher, Kenya's Micah Kogo.[3] Gebre Gebremariam of Ethiopia was six seconds back in third place. American Jason Hartmann finished fourth for the second straight year.[3]

Halfway through the race, nine men, all from Kenya or Ethiopia, broke away from the main pack. With one mile to go, the lead group was down to three. At that point, Desisa made his move and pulled away from the other two. His lead widened as he sprinted to the finish line for the win.[3] He became the fourth Ethiopian man to win the race, and the 24th East African to win in the past 26 years.[3]

Rita Jeptoo of Kenya won the women's division with a time of 2 hours, 26 minutes and 25 seconds. It was her second win at Boston, the other coming in 2006, and her first major win since taking two years off to have a baby.[1][3] She finished 33 seconds ahead of Ethiopia's Meseret Hailu, who took second place.[3] Defending champion Sharon Cherop of Kenya took third, 36 seconds off the lead.[3] American Shalane Flanagan finished fourth.[1]

Jeptoo is the third consecutive Kenyan winner. East Africans have won 17 of the past 19 races of the women's side.[3] 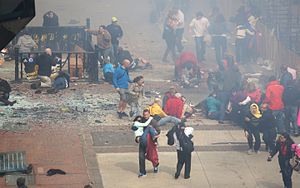 At 2:50 pm EDT, race clock time 4:09.43, almost two hours after the winners had completed the race, two explosions occurred near the finish line.[5][6] Three spectators were killed and 264 others were injured.[2] Among the injured, 17 were reported in critical condition.[7] At least 14 people required amputations.[5] The race was halted 8 minutes after the explosions; runners east of Massachusetts Avenue were diverted into Boston Common, while those west of it were diverted to Kenmore Square.[5] Over 5,000 participants who were unable to finish due to the race being halted were given medals.[8][9]

On May 16, the Boston Athletic Association gave participants who ran at least half the distance but were not able to complete the 2013 Marathon early entry into the 2014 Marathon, which was held on April 21, 2014. The BAA agreed to allow these 5,633 runners entry in August, compared to September for regular entrants. Qualifying standards were also waived for them.[10]