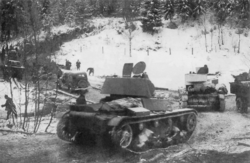 The Soviet Red Army's 7th Army first saw action in the 1939-40 Winter War against Finland. In November 1939, just before the initial Soviet attack, it consisted of the 19th Rifle Corps (24th Rifle Division, 43 RD, 70 RD, 123 RD), 50th Rifle Corps (49 RD, 90 RD, 142 RD), 10th Tank Corps, 138th Rifle Division, and an independent tank brigade.[1] The Army was first under Commander (Second rank) Yakovlev, but he was removed from command of his army and returned to Leningrad. Command of the war operation Kirill Meretskov was called-off due to extensive failures and heavy casualties, and he replaced Yakovlev as the commander of the Seventh Army.[2]

7th Army was reformed in Autumn (second half of) 1940 in the Leningrad Military District. Before the German Operation Barbarossa began it covered the Soviet frontier to the north of Lake Ladoga. Since 24 June 1941 the army included the 54th, 71st, 168th and 237th Rifle Divisions, the 26th Fortified Region, the 55th Composite Aviation Division, and some artillery and engineering formations. It became part of the Northern Front, then the Karelian Front, and conducted defensive operations in Karelia, however losing Ladoga Karelia to the Finns in July–August 1941. On 25 September 1941 it was renamed the 7th Separate Army, directly subordinate to Stavka, (VGK- the Supreme High Command), and it remained in that status until February 1944. In the middle of October 1941 - June 1944 it defended the Svir River line between Lakes Onega and Ladoga.

From June to August 1944 the army, comprising now the 37th Guards, 4th, 94th and 99th Rifle Corps, 150th and 162nd Fortified Regions, and a number of artillery, tank, engineering and other units, as part of the Karelian Front, participated in the Svir–Petrozavodsk Operation. It was disbanded in the beginning of January 1945. On the basis of its headquarters the 9th Guards Army of the Airborne Forces was created on 18 December 1944.[3]