Asa[1] Philip Randolph (April 15, 1889 – May 16, 1979) was a leader in the African-American Civil Rights Movement, the American labor movement, and socialist political parties.

In 1963, Randolph was the head of the March on Washington, which was organized by Bayard Rustin, at which Reverend Martin Luther King, Jr. delivered his "I Have A Dream" speech. Randolph inspired the Freedom budget, sometimes called the "Randolph Freedom budget", which aimed to deal with the economic problems facing the black community.

Randolph was born April 15, 1889, in Crescent City, Florida,[2] the second son of the Rev. James William Randolph, a tailor and minister[2] in an African Methodist Episcopal Church, and Elizabeth Robinson Randolph, a skilled seamstress. In 1891 the family moved to Jacksonville, Florida, which had a thriving, well-established African-American community.[3]

From his father, Randolph learned that color was less important than a person's character and conduct. From his mother, he learned the importance of education and of defending oneself physically against those who would seek to hurt one or one's family, if necessary. Randolph remembered vividly the night his mother sat in the front room of their house with a loaded shotgun across her lap, while his father tucked a pistol under his coat and went off to prevent a mob from lynching a man at the local county jail.

Asa and his brother, James, were superior students. They attended the Cookman Institute in East Jacksonville, the only academic high school in Florida for African Americans.[4] Asa excelled in literature, drama, and public speaking; he also starred on the school's baseball team, sang solos with the school choir, and was valedictorian of the 1907 graduating class.

After graduation, Randolph worked odd jobs and devoted his time to singing, acting, and reading. Reading W. E. B. Du Bois' The Souls of Black Folk convinced him that the fight for social equality was most important. Barred by discrimination from all but manual jobs in the South, Randolph moved to New York City in 1911, where he worked at odd jobs and took social sciences courses at City College.[3]

In 1913 Randolph courted and married Mrs. Lucille Campbell Green, a widow, Howard University graduate and entrepreneur who shared his socialist politics. She earned enough money to support them both. The couple had no children.[3]

Shortly after Randolph's marriage, he helped organize the Shakespearean Society in Harlem. With them he played the roles of Hamlet, Othello, and Romeo, among others. Randolph aimed to become an actor but gave up after failing to win his parents' approval.

In New York, Randolph became familiar with socialism and the ideologies espoused by the Industrial Workers of the World. He met Columbia University Law student Chandler Owen, and the two developed a synthesis of Marxist economics and the sociological ideas of Lester Frank Ward, arguing that people could only be free if not subject to economic deprivation.[3] At this point, Randolph developed what would become his distinctive form of civil rights activism, which emphasized the importance of collective action as a way for black people to gain legal and economic equality. To this end, he and Owen opened an employment office in Harlem to provide job training for southern migrants and encourage them to join trade unions.[3]

In 1917 Randolph and Chandler Owen founded the Messenger[6] with the help of the Socialist Party of America. It was a radical monthly magazine, which campaigned against lynching, opposed U.S. participation in World War I, urged African Americans to resist being drafted, to fight for an integrated society, and urged them to join radical unions. The Department of Justice called the Messenger "the most able and the most dangerous of all the Negro publications." When the Messenger began publishing the work of black poets and authors, a critic called it "one of the most brilliantly edited magazines in the history of Negro journalism." [3]

Soon thereafter, however, the editorial staff of the Messenger became divided by three issues – the growing rift between West Indian and African Americans, support for the Bolshevik revolution, and support for Marcus Garvey's Back-to-Africa movement. In 1919, most West Indian radicals joined the new Communist Party, while African-American leftists – Randolph included – mostly supported the Socialist Party. The infighting left the Messenger short of financial support, and it went into decline.[3]

Randolph ran on the Socialist Party ticket for New York State Comptroller in 1920, and for Secretary of State of New York in 1922, unsuccessfully.[6] 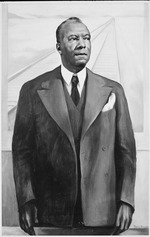 Randolph’s first experience with labor organization came in 1917, when he organized a union of elevator operators in New York City.[6] In 1919 he became president of the National Brotherhood of Workers of America,[7] a union which organised amongst African-American shipyard and dock workers in the Tidewater region of Virginia.[8] The union dissolved in 1921, under pressure from the American Federation of Labor.

His greatest success came with the Brotherhood of Sleeping Car Porters, who elected him President in 1925.[6] This was the first serious effort to form a labor institution for employees of the Pullman Company, which was a major employer of African Americans. The railroads had expanded dramatically in the early 20th century, and the jobs offered relatively good employment at a time of widespread racial discrimination. Because porters were not unionized, however, most suffered poor working conditions and were underpaid.[3][9]

Under Randolph's direction, the BSCP managed to enroll 51 percent of porters within a year, to which Pullman responded with violence and firings. In 1928, after failing to win mediation under the Watson-Parker Railway Labor Act, Randolph planned a strike. This was postponed after rumors circulated that Pullman had 5,000 replacement workers ready to take the place of BSCP members. As a result of its perceived ineffectiveness membership of the union declined;[3] by 1933 it had only 658 members and electricity and telephone service at headquarters had been disconnected because of nonpayment of bills.[10]

Fortunes of the BSCP changed with the election of President Franklin D. Roosevelt in 1932. With amendments to the Railway Labor Act in 1934, porters were granted rights under federal law. Membership in the Brotherhood jumped to more than 7,000. After years of bitter struggle, the Pullman Company finally began to negotiate with the Brotherhood in 1935, and agreed to a contract with them in 1937. Employees gained $2,000,000 in pay increases, a shorter workweek, and overtime pay.[11] Randolph maintained the Brotherhood's affiliation with the American Federation of Labor through the 1955 AFL-CIO merger.[12] 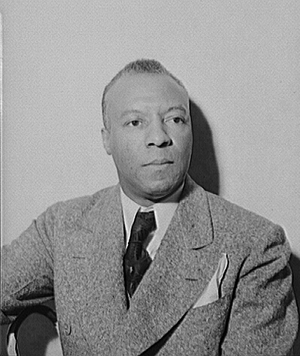 Through his success with the BSCP, Randolph emerged as one of the most visible spokespeople for African-American civil rights. In 1941, he, Bayard Rustin, and A. J. Muste proposed a march on Washington[6] to protest racial discrimination in war industries, an end to segregation, access to defense employment, the proposal of an anti-lynching law and of the desegregation of the American Armed forces.[13] Randolph's belief in the power of peaceful direct action was inspired partly by Mahatma Gandhi's success in using such tactics against British occupation in India.[14] Randolph threatened to have 50,000 blacks march on the city;[10] it was cancelled after President of the United States Franklin D. Roosevelt issued Executive Order 8802, or the Fair Employment Act.[6] Some activists, including Rustin,[15] felt betrayed because Roosevelt's order applied only to banning discrimination within war industries and not the armed forces. Nonetheless, the Fair Employment Act is generally considered an important early civil rights victory.

And the movement continued to gain momentum. In 1942, an estimated 18,000 blacks gathered at Madison Square Garden to hear Randolph kick off a campaign against discrimination in the military, in war industries, in government agencies, and in labor unions.[16] Following passage of the Act, during the Philadelphia transit strike of 1944, the government backed African-American workers' striking to gain positions formerly limited to white employees.[17]

Buoyed by these successes, Randolph and other activists continued to press for the rights of African Americans. In 1947, Randolph, along with colleague Grant Reynolds, renewed efforts to end discrimination in the armed services, forming the Committee Against Jim Crow in Military Service, later renamed the League for Non-Violent Civil Disobedience. When President Truman asked Congress for a peacetime draft law, Randolph urged young black men to refuse to register. Since Truman was vulnerable to defeat in 1948 and needed the support of the growing black population in northern states, he eventually capitulated.[3] On July 26, 1948, President Harry S. Truman abolished racial segregation in the armed forces through Executive Order 9981.[18]

In 1950, along with Roy Wilkins, Executive Secretary of the NAACP, and, Arnold Aronson,[19] a leader of the National Jewish Community Relations Advisory Council, Randolph founded the Leadership Conference on Civil Rights (LCCR). LCCR has been a major civil rights coalition. It coordinated a national legislative campaign on behalf of every major civil rights law since 1957. 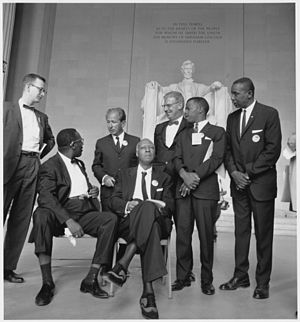 Civil Rights March on Washington, D.C. (Leaders of the march)

Randolph and Rustin also formed an important alliance with Martin Luther King, Jr. In 1957, when schools in the south resisted school integration following Brown v. Board of Education, Randolph organized the Prayer Pilgrimage for Freedom with Martin Luther King, Jr. In 1958 and 1959, Randolph organized Youth Marches for Integrated Schools in Washington, DC.[3] At the same time, he arranged for Rustin to teach King how to organize peaceful demonstrations in Alabama and to form alliances with progressive whites.[15] The protests directed by James Bevel in cities such as Birmingham and Montgomery provoked a violent backlash by police and the local Ku Klux Klan throughout the summer of 1963, which was captured on television and broadcast throughout the nation and the world. Rustin later remarked that Birmingham "was one of television's finest hours. Evening after evening, television brought into the living-rooms of America the violence, brutality, stupidity, and ugliness of {police commissioner} Eugene "Bull" Connor's effort to maintain racial segregation."[20] Partly as a result of the violent spectacle in Birmingham, which was becoming an international embarrassment, the Kennedy administration drafted civil rights legislation aimed at ending Jim Crow once and for all.[20]

Randolph finally realized his vision for a March on Washington for Jobs and Freedom on August 28, 1963, which attracted between 200,000–300,000 to the nation's capital. The rally is often remembered as the high-point of the Civil Rights Movement, and it did help keep the issue in the public consciousness. However, when President Kennedy was assassinated three months later, Civil Rights legislation was stalled in the Senate. It was not until the following year, under President Lyndon B. Johnson, that the Civil Rights Act was finally passed. In 1965, the Voting Rights Act was passed. Although King and Bevel rightly deserve great credit for these legislative victories, the importance of Randolph's contributions to the Civil Rights Movement is large.

Randolph's religious views varied over his lifetime,[21] though he is usually identified as an atheist.[3] In 1973, he signed the Humanist Manifesto II.[22] 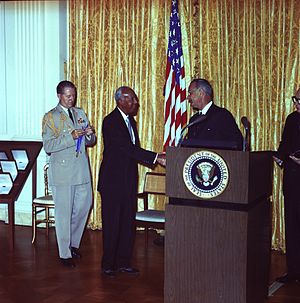 Randolph Receiving the Presidential Medal of Freedom in 1964 from President Lyndon B. Johnson.

Randolph had a significant impact on the Civil Rights Movement from the 1930s onward. The Montgomery Bus Boycott in Alabama was directed by E.D. Nixon, who had been a member of the BSCP and was influenced by Randolph’s methods of nonviolent confrontation.[3] Nationwide, the Civil Rights Movement in the 1950s and 1960s used tactics pioneered by Randolph, such as encouraging African-Americans to vote as a bloc, mass voter registration, and training activists for nonviolent direct action.[24]

In buildings, streets, and trains 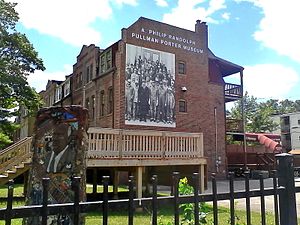