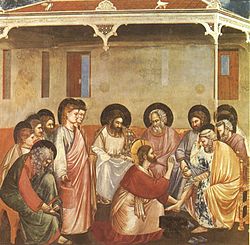 Christ washing the feet of the Apostles, by Giotto di Bondone (Cappella Scrovegni a Padova)

Ablution, in religion, is a prescribed washing of part or all of the body or of possessions, such as clothing or ceremonial objects, with the intent of purification or dedication.[1]

In Christianity, both baptism and footwashing are forms of ablution. In liturgical churches, ablution can refer to purifying fingers or vessels related to the Eucharist.[2] In the NT washing also occurs in reference to rites of Judaism[3] part of the action of a healing by Jesus,[4] the preparation of a body for burial,[Acts 9:37] the washing of nets by fishermen,[Lk. 5:2] a person's personal washing of the face to appear in public,[Matt. 6:17] the cleansing of an injured person's wounds,[Acts 16:33] Pilate's washing of his hands as a symbolic claim of innocence[Matt. 27:24] and foot washing,[Jn. 13:5-14] [1 Tim. 5:10] now partly a symbolic rite within the Church.[5]

According to the Gospel of Matthew, Pontius Pilate declared himself innocent of the blood of Jesus by washing his hands.[Matthew 27:24] This act of Pilate may not, however, have been borrowed from the custom of the Jews. The same practice was common among the Greeks and Romans.

According to Christian tradition, the Pharisees carried the practice of ablution to great excess.[Matt. 23:25] The Gospel of Mark refers to their ceremonial ablutions: "For the Pharisees…wash their hands 'oft'"[Mark 7:1-5] or, more accurately, "with the fist" (R.V., "diligently"); or, as Theophylact of Bulgaria explains it, "up to the elbow," referring to the actual word used in the Greek New Testament, πυγμή pygmē, which refers to the arm from the elbow to the tips of the fingers.[6][7]

In the Book of Acts, Paul and other men performed ablution before entering the Temple in Jerusalem: "Then Paul took the men, and the next day purifying himself with them entered into the temple, to signify the accomplishment of the days of purification, until that an offering should be offered for every one of them."[Acts 21:26] In the Old Testament, ablution was considered a prerequisite to approaching God, whether by means of sacrifice, prayer or merely by entering a holy place.[8]

In the Tridentine Mass and in the similar Anglo-Catholic Mass, the term "ablutions" refers to when the priest rinses his hands first in wine and then in water following the Communion. It is to be distinguished from the lavabo, when the celebrant washes his hands with water only, reciting the words of Psalm 26:6-12 (KJV—in the Septuagint it is Psalm 25) at the offertory.

In the Mass of Paul VI and the Anglican Eucharist the priest does not normally use wine to wash his hands at the ablution, although this is permitted, but only water.

In the Eastern Orthodox and Greek-Catholic Churches, the term "ablution" refers to consuming the remainder of the Gifts (the Body and Blood of Christ) at the end of the Divine Liturgy. Holy Communion is always received in both Species (the Body and the Blood of Christ) not only by the clergy but also by the faithful. This is accomplished by placing the particles of the consecrated Lamb (bread) into the chalice, and distributing Communion to the faithful with a spoon. The portion which remains in the chalice afterwards must be consumed.

The ablutions will normally be performed by the deacon, but if no deacon is serving the priest will do them. After the Litany of Thanksgiving that follows Communion, the deacon will come into the sanctuary and kneel, placing his forehead on the Holy Table (Altar) and the priest will bless him to consume the Gifts, which is done at the Prothesis (Table of Oblation). First, using the liturgical spoon he will consume all of the Body and Blood of Christ which remain in the chalice. Then he will pour hot water on the diskos (paten), which is then poured into the chalice and consumed (this is to consume any particles that may remain on the diskos). Next the liturgical spear, spoon and chalice will be rinsed first with wine and then with hot water, which are then consumed. All of the sacred vessels are then wiped dry with a towel, wrapped in their cloth coverings and put away.

Because the ablutions necessarily require consuming the Holy Mysteries (the Body and Blood of Christ), a priest or deacon may only perform them after having fully prepared himself through fasting and the lengthy Preparation for Holy Communion.

When a priest must take Holy Communion to the sick or homebound, if he has not prepared himself to receive the Holy Mysteries, he may ablute the chalice by pouring water into it and asking the one to whom he brought the Sacrament (or a Baptized child who because of their youth is not obliged to prepare for Communion) to consume the ablution.

If the Reserved Mysteries should become moldy, they must still be consumed in the same manner as the ablutions after Liturgy (normally, a fair amount of wine would be poured over them before consuming them, in order to soften and disinfect them). They should not be burned or buried. To prevent this, when the Mysteries are to be reserved for the sick, they should be thoroughly dried before being placed in the Tabernacle.

In Orthodox Christianity, there is also an ablution performed on the eighth day after Baptism. Immediately after being Baptized, every person, including an infant, is confirmed using the Mystery (Sacrament) of Chrismation. In the early church, the places where the person was anointed with Chrism were carefully bandaged, and were kept covered for eight days. During this period, the newly illumined (newly baptized person) would also wear his baptismal robe every day. At the end of the eight days, the priest would remove the bandages and baptismal garment and perform ablutions over him. While the bandaging no longer takes place, the ritual ablutions are still performed.

The newly illumined (newly baptized person) is brought back to the church by his Godparents for the ablutions. The priest stands him in the center of the church, in front of the Holy Doors, facing east. He loosens the belt of the baptismal robe and prays for him, that God may preserve the newly illumined in purity and illumine him by grace. He then dips a sponge in water and sprinkles him in the sign of the cross saying: "Thou art justified. Thou art illumined. Thou art sanctified. Thou art washed: in the name of the Father, and of the Son, and of the Holy Spirit. Amen." Then, as he says the next prayer, he washes each of the places where he had been anointed with Chrism. Next he performs the Tonsure, symbolic of the life of self-sacrifice a Christian must lead.

Many Christian churches practice a ceremony of the Washing of Feet, following the example of Jesus in the Gospel.[John 13:1-17] Some interpret this as an ordinance which the church is obliged to keep as a commandment, see also Biblical law in Christianity. Others interpret it as an example that all should follow. Most denominations that practice the rite will perform it on Maundy Thursday. Often in these services, the bishop will wash the feet of the clergy, and in monasteries the Abbot will wash the feet of the brethren.

St. Benedict of Nursia lays out in his Rule that the feet of visitors to the monastery should be washed, and also that those who are assigned to serve in the kitchen that week should wash the feet of all the brethren.

Ablutions for the Dead

When an Orthodox Christian dies, his body is washed and dressed before burial. Although this custom is not considered to impose any sort of ritual purity, it is an important aspect of charitable care for the departed. Ideally, this should not be deferred to an undertaker, but should be performed by family members or friends of the deceased.

When an Orthodox priest or bishop dies, these ablutions and vesting are performed by the clergy, saying the same prayers for each vestment that are said when the departed bishop or priest vested for the Divine Liturgy. After the body of a Bishop is washed and vested, he is seated in a chair and the Dikirion and Trikirion are placed in his hands for the final time.

When an Orthodox monk dies, his body is washed and clothed in his monastic habit by brethren of his monastery. Two significant differences are that when his mantle is placed on him, its hem is torn to form bands, with which his body is bound (like Lazarus in the tomb), and his klobuk is placed on his head backwards, so that the monastic veil covers his face (to show that he had already died to the world, even before his physical death). When an Orthodox nun dies, the sisterhood of her convent performs the same ministrations for her as are done for monks.