From Infogalactic: the planetary knowledge core
Jump to: navigation, search
This article is about a specific class of people in Australian law. For more general information, see Indigenous Australians. 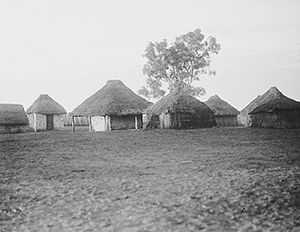 Aboriginal Australians are legally defined as people who are members "of the Aboriginal race of Australia" (indigenous to the Australian continent—mainland Australia or to the island of Tasmania).[2][3][4][5]

The category "Aboriginal Australians" was coined by the British after they began colonising Australia in 1788, to refer collectively to all people they found already inhabiting the continent, and later to the descendants of any of those people. Until the 1980s, the sole legal and administrative criterion for inclusion in this category was race, classified according to visible physical characteristics or known ancestors. As in the British slave colonies of North America and the Caribbean, where the principle of partus sequitur ventrem was adopted from 1662, children's status was determined by that of their mothers; if born to Aboriginal mothers, children were considered Aboriginal, regardless of their paternity.[6]

The Constitution of Australia, in its original form as of 1901, referred to Aboriginals twice but without definition. Section 51(xxvi) gave the Commonwealth parliament power to legislate with respect to "the people of any race" throughout the Commonwealth, except for people of "the aboriginal race". The purpose of this provision was to give the Commonwealth power to regulate non-white immigrant workers, who would follow work opportunities interstate.[8] The only other reference, Section 127, provided simply that "aboriginal natives shall not be counted" in reckoning the size of the population of the Commonwealth or any part of it.

After both of these references were removed by the 1967 referendum, the Australian Constitution had no references to Aboriginals. Since that time, there have been a number of proposals to amend the constitution to specifically mention Indigenous Australians.[9][10]

The change to Section 51(xxvi) gave the Commonwealth parliament the power to make laws specifically with respect to Aboriginal peoples as a "race". In the Tasmanian Dam Case of 1983, the High Court of Australia was asked to determine whether Commonwealth legislation, whose application could relate to Aboriginal people—parts of the World Heritage Properties Conservation Act 1983 (Cth) as well as related legislation—was supported by Section 51(xxvi) in its new form. The case concerned an application of legislation that would preserve cultural heritage of Aboriginal Tasmanians. It was held that Aboriginal Australians and Torres Strait Islanders, together or separately, and any part of either, could be regarded as a "race" for this purpose. As to the criteria for identifying a person as a member of such a "race", the definition by Justice Deane has become accepted as current law.[7] Deane said:

It is unnecessary, for the purposes of the present case, to consider the meaning to be given to the phrase "people of any race" in s. 51(xxvi). Plainly, the words have a wide and non-technical meaning [...]. The phrase is, in my view, apposite to refer to all Australian Aboriginals collectively. Any doubt, which might otherwise exist in that regard, is removed by reference to the wording of par. (xxvi) in its original form. The phrase is also apposite to refer to any identifiable racial sub-group among Australian Aboriginals. By "Australian Aboriginal" I mean, in accordance with what I understand to be the conventional meaning of that term, a person of Aboriginal descent, albeit mixed, who identifies himself as such and who is recognised by the Aboriginal community as an Aboriginal.[11]

Eve Fesl, a Gabi Gabi woman, wrote in the Aboriginal Law Bulletin describing how she and possibly other Aboriginal people preferred to be identified:

The word 'aborigine' refers to an indigenous person of any country. If it is to be used to refer to us as a specific group of people, it should be spelt with a capital 'A', i.e., 'Aborigine'.[13]

While the term 'indigenous' is being more commonly used by Australian Government and non-Government organisations to describe Aboriginal Australians, Lowitja O'Donoghue, commenting on the prospect of possible amendments to Australia's constitution, was reported as saying:

I really can't tell you of a time when 'indigenous' became current, but I personally have an objection to it, and so do many other Aboriginal and Torres Strait Islander people. [...] This has just really crept up on us ... like thieves in the night. [...] We are very happy with our involvement with indigenous people around the world, on the international forum [...] because they're our brothers and sisters. But we do object to it being used here in Australia.[14]

O'Donoghue went on to say that the term indigenous robbed the traditional owners of Australia of an identity because some non-Aboriginal people now wanted to refer to themselves as indigenous because they were born there.[14]

Not only are these categories inappropriate, they serve to divide us. [...] Government's insistence on categorising us with modern words like 'urban', 'traditional' and 'of Aboriginal descent' are really only replacing old terms 'half-caste' and 'full-blood' – based on our colouring.[15]

She called for a replacement of this terminology by that of "Aborigine" or "Torres Strait Islander" – "irrespective of hue".[15]

Scholars had disagreed whether their closest kin outside Australia were certain South Asian groups or African groups. The latter would imply a migration pattern in which their ancestors passed through South Asia to Australia without intermingling genetically with other populations along the way.[16] A 2009 genetic study in India found similarities among Indian archaic populations and Aboriginal people, indicating a Southern migration route, with expanding populations from Southeast Asia migrating to Indonesia and Australia.

In a genetic study in 2011, researchers found evidence, in DNA samples taken from strands of Aboriginal people's hair, that the ancestors of the Aboriginal population split off from the ancestors of the European and Asian populations between 65,000 and 75,000 years ago—roughly 24,000 years before the European and Asian populations split off from each other. These Aboriginal ancestors migrated into South Asia and then into Australia, where they stayed, with the result that, outside of Africa, the Aboriginal peoples have occupied the same territory continuously longer than any other human populations. These findings suggest that modern Aboriginal peoples are the direct descendants of migrants who left Africa up to 75,000 years ago.[17][18] This finding is supported by earlier archaeological finds of human remains near Lake Mungo that date to 45,000 years ago. The same genetic study of 2011 found evidence that Aboriginal peoples carry some of the genes associated with the Denisovan (a species of human related to but distinct from Neanderthals) peoples of Asia; the study suggests that there is an increase in allele sharing between the Denisovans and the Aboriginal Australians genome compared to other Eurasians and Africans. Examining DNA from a finger bone excavated in Siberia, researchers concluded that the Denisovans migrated from Siberia to tropical parts of Asia and that they interbred with modern humans in South-East Asia 44,000 years ago before Australia separated from Papua New Guinea. They contributed DNA to Aboriginal Australians along with present-day New Guineans and an indigenous tribe in the Philippines known as Mamanwa. This study makes Aboriginal Australians one of the oldest living populations in the world and possibly the oldest outside of Africa, confirming they may also have the oldest continuous culture on the planet.[19] The Papuans have more sharing alleles than Aboriginal peoples. The data suggest that modern and archaic humans interbred in Asia before the migration to Australia.[20]

Dispersing across the Australian continent over time, the ancient people expanded and differentiated into hundreds of distinct groups, each with its own language and culture.[21] More than 400 distinct Australian Aboriginal peoples have been identified across the continent, distinguished by unique names designating their ancestral languages, dialects, or distinctive speech patterns.[22] Historically, these groups lived in three main cultural areas, known as the Northern, Southern, and Central cultural areas. The Northern and Southern areas, having richer natural marine and woodland resources, were more densely populated than the less resource-rich Central area.[21]

There are various other names from Australian Aboriginal languages commonly used to identify groups based on geography, including: