Abraham Zapruder (May 15, 1905 – August 30, 1970) was an American clothing manufacturer who witnessed the assassination of President John F. Kennedy in Dallas, Texas on November 22, 1963. Zapruder unexpectedly captured the event in a home movie while filming the presidential limousine and motorcade as it traveled through Dealey Plaza.

Zapruder was born into a Russian Jewish family in the city of Kovel, the Russian Empire (now Ukraine). He received only four years of formal education in Russia. In 1920, amid the turmoil of the Russian Civil War, his family emigrated to the United States, settling in Brooklyn, New York.[1] Studying English at night, he found work as a clothing pattern maker in Manhattan's garment district. In 1933, he married Lillian Sapovnik (1913–1993) with whom he had two children.[2] Zapruder was also a Freemason of the 33rd degree.[3]

In 1941, Zapruder moved to Dallas, Texas to work for Nardis, a local sportswear company. In 1949 he co-founded Jennifer Juniors, Inc., producing the Chalet and Jennifer Juniors brands.[4][5] His offices were on the fourth floor of the Dal-Tex Building,[6] across the street from the Texas School Book Depository.[7] 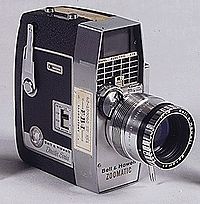 Abraham Zapruder's camera, in the collection of the US National Archives

At the time of the assassination, Zapruder was an admirer of President Kennedy and considered himself a Democrat. Zapruder had originally planned to film the motorcade carrying President Kennedy through downtown Dallas on November 22, but decided not to film the event as it had been raining that morning. When he arrived at work that morning without his camera, Zapruder's assistant insisted that he retrieve it from home before going to Dealey Plaza because the weather had cleared.[8]

Zapruder's movie camera was an 8 mm Bell & Howell Zoomatic Director Series Model 414 PD—top of the line when it was purchased in 1962. Zapruder had planned to film the motorcade from his office window but decided to choose a more optimal spot in Dealey Plaza where the motorcade would be passing.[9] He chose to film on top of 4-foot (1.2 m) concrete abutment which extends from a retaining wall that was part of the John Neely Bryan concrete pergola on the grassy knoll north of Elm Street, in Dealey Plaza.[10] Zapruder's secretary, Marilyn Sitzman, offered to assist Zapruder as he suffered from vertigo and was apprehensive about standing on the abutment alone.[9] While Sitzman stood behind Zapruder and held his coat to steady him, he began filming the presidential motorcade as it turned on Houston Street onto Elm Street in front of the Book Depository. Zapruder's film captured 26.6 seconds of the traveling motorcade carrying President Kennedy on 486 frames of Kodak Kodachrome II safety film. Zapruder's film captured the fatal head shot that struck President Kennedy as his limousine passed almost directly in front of Zapruder and Sitzman's position, 65 feet (20 m) from the center of Elm Street.[11]

Zapruder would later recall that he immediately knew that President Kennedy's wound was fatal as he saw the president's head "...explode like a firecracker."[8][12] Walking back to his office amid the confusion following the shots, Zapruder encountered The Dallas Morning News reporter Harry McCormick, who was standing near Zapruder and noticed he was filming the motorcade. McCormick was acquainted with Agent Forrest Sorrels of the Secret Service's Dallas office and offered to bring Sorrels to Zapruder's office.[13][14] Zapruder agreed and returned to his office. McCormick later found Sorrels outside the Sheriff's office at Main and Houston, and together they went to Zapruder's office.

Zapruder agreed to give the film to Sorrels on the condition it would be used only for investigation of the assassination. The three then took the film to the television station WFAA to be developed. After it was realized that WFAA was unable to develop Zapruder's footage, film was taken to Eastman Kodak's Dallas processing plant where it was immediately developed later that afternoon. As the Kodachrome process requires different equipment for duplication than for simple development, Zapruder's film was not developed until around 6:30 p.m. The original developed film was taken to the Jamieson Film Company, where three additional copies were exposed; these were returned to Kodak around 8 p.m. for processing. Zapruder kept the original, plus one copy, and gave the other two copies to Sorrels, who sent them to Secret Service headquarters in Washington.

While at WFAA, Zapruder described on live television the assassination of President Kennedy:

JAY WATSON (WFAA, Dallas): [...] May I have your name please, sir?
ABRAHAM ZAPRUDER: My name is Abraham Zapruder.
WATSON: Mister, ZAP-puh-dah?
ZAPRUDER: ZAP-pru-der, yes, sir.
WATSON: ZAP-pru-dah, and would you tell us your story please, sir?[15][copyright violation?]
ZAPRUDER: I got out in, uh, about a half-hour earlier to get a good spot to shoot some pictures. And I found a spot, one of these concrete blocks they have down near that park, near the underpass. And I got on top there, there was another girl from my office, she was right behind me. And as I was shooting, as the President was coming down from Houston Street making his turn, it was about a half-way down there, I heard a shot, and he slumped to the side, like this. Then I heard another shot or two, I couldn't say it was one or two, and I saw his head practically open up [places fingers of right hand to right side of head in a narrow cone, over his right ear], all blood and everything, and I kept on shooting. That's about all, I'm just sick, I can't…
WATSON: I think that pretty well expresses the entire feelings of the whole world.
ZAPRUDER: Terrible, terrible.
WATSON: You have the film in your camera, we'll try to get...
ZAPRUDER: Yes, I brought it on the studio, now.
WATSON: We'll try to get that processed and have it as soon as possible.[16]

Late that evening, Zapruder was contacted at home by Richard Stolley, an editor at Life magazine (and first editor of the future People magazine). They arranged to meet the following morning to view the film, after which Zapruder sold the print rights to Life magazine for $50,000. Stolley was representing Time/Life on behalf of Publisher Charles Douglas Jackson.

The night after the assassination, Zapruder said that he had a nightmare in which he saw a booth in Times Square advertising "See the President's head explode!"[19] He determined that, while he was willing to make money from the film, he did not want the public to see the full horror of what he had seen. Therefore, a condition of the sale to Life was that frame 313, showing the fatal shot, would be withheld.[20] Although he made a profit from selling the film, he asked that the amount he was paid not be publicly disclosed. He later donated $25,000 ($193 thousand today) of the money he was paid to the widow of Officer J. D. Tippit, a Dallas police officer who was shot and killed by, according to the Warren Commission, Lee Harvey Oswald 45 minutes after President Kennedy was killed.[8][21][22]

In 1975, Time, Inc. (which owned Life magazine) sold the film back to the Zapruder family for $1. In 1978, the Zapruders allowed the film to be stored at the National Archives and Records Administration where it remains. In 1999, the Zapruders donated the copyright of the film to the Sixth Floor Museum at Dealey Plaza.[8]

On November 22, United States PRS Special Agent Maxwell D. Phillips sent a hand-written memo[23] to Secret Service head James Rowley, stating that, "According to Mr Zapruder the position of the assassin was behind Mr Zapruder." But in his testimony to the Warren Commission Zapruder was less certain:

LIEBELER: Did you form any opinion about the direction from which the shots came by the sound, or were you just upset by the thing you had seen?
ZAPRUDER: No, there was too much reverberation. There was an echo which gave me a sound all over. In other words that square is kind of—it had a sound all over.