and one territorial unit:

The final status of the latter has not been settled yet, as the region, such as defined administratively, is not under the control of Moldovan authorities. The cities of Comrat and Tiraspol also have municipality status, but are not among first-tier units of Moldova; they are the seats of Gagauzia and Transnistria, respectively. 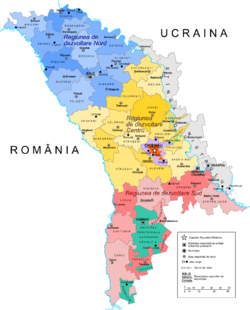 Moldova has a total of 982 incorporated localities (de jure with 982 mayors and 982 local councils), of which 5 have municipality status, 61 have city status, and 916 are villages with commune status. They cover the entire area of the country. Another 699 villages are too small to have a separate administration, and are part of either cities (40 of them) or communes (659). This makes for a total of 1,681 localities of Moldova, all but two of which are inhabited.

The status of Chișinău, Bălți, and Bender as municipalities and first-level territorial units of the country allows their suburb villages to have, when large enough, their own mayor and local council. By contrast, the villages that are administratively part of (some of) the other cities do not retain self-rule.

Areas not under central government control include:

On the opposite end, 42 of the 66 cities, and about half the communes of Moldova have local administration providing services for a single locality.

The village of Schinoasa was outlined within commune Țibirica, Călărași district in 2007, and information is not available yet whether it has any population. 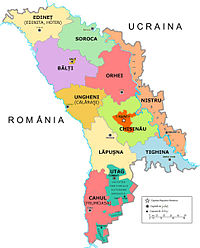 In October 1999 a Taraclia County was split out from the Cahul County; it coincides with the current Taraclia district.