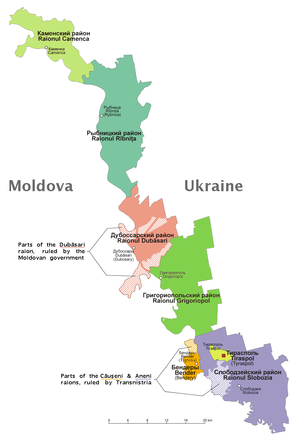 Also, Bender (Tighina; Бендéры), situated on the western bank of the Dniester (in Bessarabia), geographically outside Transnistria, is not part of territorial unit Transnistria of Moldova as defined by the central authorities, but is controlled by the PMR authorities, which consider it part of PMR's administrative organization.

At the same time, some areas which are situated on the right bank of the Dniester are under PMR control. These areas consist of the city of Bender with its suburb Proteagailovca, the communes Gîsca, Chițcani (including villages Merenești and Zahorna), and the commune of Cremenciug, formally in the Căușeni District, situated south of the city of Bender.

The breakaway PMR authorities also claim the communes of Varnița, in the Anenii Noi District, a northern suburb of Bender, and Copanca, in the Căușeni District, south of Chițcani, but these villages remain under Moldovan control.