Adolf "Addi" Glunz (11 June 1916 – 1 August 2002) was a World War II flying ace in the Luftwaffe (German Air Force). Glunz is credited with 71 aerial victories achieved in 574 combat missions. A flying ace or fighter ace is a military aviator credited with shooting down five or more enemy aircraft during aerial combat.[1] He engaged the enemy on 238 occasions and claimed all but three victories over the Western Front.

Glunz was born 11 June 1916 at Bresegard in Mecklenburg, at the time in the Grand Duchy of Mecklenburg-Schwerin, a federated state of the German Empire. He joined the Luftwaffe in September 1939 and after training posted as a Gefreiter to 4 Staffel, Jagdgeschwader 52 (JG 52—52nd Fighter Wing) in November 1940.

His first victory claim was a Spitfire on 7 May and a second on 19 May. He then claimed 3 victories on the Eastern Front, and two tanks destroyed. Glunz then was posted to II./Jagdgeschwader 26 "Schlageter" (JG 26—26th Fighter Wing) based in France in July 1941. By the end of 1942 he had some 23 victories. On 28 March, Glunz intercepted six Mosquito bombers near Dunkirk at low level. He succeeded in shooting 2 bombers within one minute for his 28th and 29th victories. In August 1943, he became the only Non-commissioned officer in JG 26 to receive the Knight's Cross of the Iron Cross (Ritterkreuz des Eisernen Kreuzes). Oberfeldwebel Glunz became Staffelkapitän (squadron leader), 5./JG 26 in January 1944. On 22 February 1944, he claimed 6 victories in a day, including five four-engined bombers. He was commissioned as a Leutnant in April 1944.

In March 1944, Glunz was appointed Staffelkapitän of 6./JG 26. Operating over the Invasion front in June 1944, Glunz claimed 3 P-47 fighters shot down on 10 June. He was awarded the Knight's Cross of the Iron Cross with Oak Leaves (Ritterkreuz des Eisernen Kreuzes mit Eichenlaub) on 24 June 1944 after 65 victories. The award was officially presented at the Führerhauptquartier at Rastenburg on 2 August 1944. 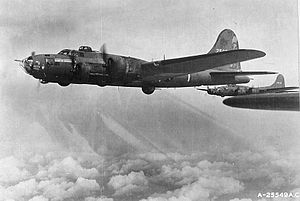 This Boeing B-17F was shot down by Glunz on 12 August 1943 after it was damaged by Johannes Naumann.

He recorded his 71st and last victory, a Spitfire, on 1 January 1945. He is credited with 5 ground victories during Operation Bodenplatte. In March 1945, Glunz was transferred to the III./Ergänzungs-Jagdgeschwader 2 (EJG 2—2nd Replacement Training Unit) for conversion training for the Messerschmitt Me 262 jet. Assigned to Jagdgeschwader 7 (JG 7—7th Fighter Wing) he served the remainder of the war with this unit. However he never flew the Me 262 in combat.[2]

Although continuously in action until 1945, "Addi" Glunz was never shot down or wounded in aerial combat. He was wounded once on the ground when he was showered with glass fragments during a bombing raid on Abbeville airfield in April 1942. The nearest he came to losing an aircraft was on 13 October 1944, when a broken oil pipe caused his engine failure while in combat with P-47 Thunderbolts.[3]