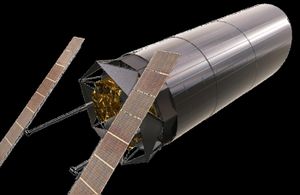 One proposed ATLAST concept, a design based on an 8 meter monolithic mirror

The Advanced Technology Large-Aperture Space Telescope (ATLAST)[1][2] is an 8 to 16.8-meter (26 to 55-foot) UV-optical-NIR space telescope proposed by Space Telescope Science Institute, the science operations center for the Hubble Space Telescope (HST). If launched, ATLAST would be a replacement and successor for the HST, with the ability to obtain spectroscopic and imaging observations of astronomical objects in the ultraviolet, optical, and infrared wavelengths, but with substantially better resolution than either HST or the planned James Webb Space Telescope (JWST). Like JWST, ATLAST will be launched to the Sun-Earth L2 Lagrange point.

ATLAST is envisioned as a flagship mission of the 2025 – 2035 period, designed to determine whether there is life elsewhere in the galaxy. It will attempt to accomplish this by searching for "biosignatures" (such as molecular oxygen, ozone, water, and methane) in the spectra of terrestrial exoplanets.

The backronym that the project currently uses, 'ATLAST', is in fact a pun. It refers to the time taken to decide on a true, visible-light, successor for the Hubble Space Telescope. However, it is expected as the project progresses, a new name will be chosen for the mission.

ATLAST will have a primary mirror diameter in the 8 m to 16.8 m range[citation needed]. Two different telescope architectures have been identified for ATLAST, but with similar optical designs, that span the range in technologies. The architectures are a telescope with a monolithic primary mirror and two variations of a telescope with a large segmented primary mirror. The concepts invoke heritage from the HST and JWST designs, but also take significant departures from these designs to minimize complexity, mass, or both. ATLAST will have an angular resolution that is 5 – 10 times better than JWST and a sensitivity limit that is up to 2,000 times better than HST.

Two of the concepts, the 8-m monolithic mirror telescope and the 16.8 m segmented mirror telescope, span the range of UVOIR[clarification needed] observatories that are enabled by NASA's proposed Space Launch System (SLS) vehicle. The 8 m ATLAST offers the inherent advantages of a monolithic aperture telescope in terms of high-contrast imaging and superb wavefront control. The 16 m segmented mirror ATLAST represents a pathway to truly large apertures in space and uses the largest extrapolation of a JWST-like chord-fold primary mirror packaging. However, the ATLAST mission is not solely dependent on the SLS. The third concept, a 9.2 m segmented main mirror reflecting telescope is compatible with an Evolved Expendable Launch Vehicle (EELV) and also adopts JWST design heritage, essentially being an incrementally larger variant of the JWST, which has a 6.5 m segmented main mirror. The ATLAST technology development plan is supported with funding from NASA's Astrophysics Strategic Mission Concept Studies program, the Goddard Space Flight Center, the Marshall Space Flight Center, the Jet Propulsion Laboratory (Caltech) and related programs at Northrop Grumman Aerospace Systems and Ball Aerospace and Technology Corp.

In both designs, ATLAST will be able to be serviced, much like the HST has been. Using either a robotic ferry (the currently proposed method), or an astronaut crew flying in an Orion spacecraft (which will allow NASA to gain experience for future manned Solar System missions), instruments such as cameras would be replaced and returned to Earth for analysis and future upgrades. Like the HST and proposed JWST, ATLAST would be powered by solar panels.

ATLAST was originally intended to be launched from the Kennedy Space Center's Launch Pad 39A atop of the Ares V. Following the cancellation of that vehicle, ATLAST will now likely launch aboard the Space Launch System (SLS). If the 9.2-meter design is adopted, launching would take place from NASA facilities capable of launching EELVs. Much like the proposed Orion/Altair flights to the Moon, the SLS will place ATLAST and the Earth Departure Stage (EDS) into a "parking" orbit, while engineers check out the systems of both the EDS and the ATLAST. Once cleared, the EDS will fire again and ATLAST will then begin a three-month journey to the Sun-Earth L2 Point, entering a so-called "halo orbit" around the point once it is reached. While en route to the Sun-Earth L2 Point, the segmented versions of the telescope would deploy their optics.

Servicing missions, launched every 5 to 7 years, would allow astronomers to upgrade the ATLAST Telescope with new instruments and technologies. Like the HST, ATLAST should have a 20-year lifespan.

ATLAST, using an internal coronagraph or an external occulter, can characterize the atmosphere and surface of an Earth-sized exoplanet in the Habitable Zone of long-lived stars at distances up to 140 light years, including its rotation rate, climate, and habitability. ATLAST will also allow us to glean information on the nature of the dominant surface features, changes in cloud cover and climate, and, potentially, seasonal variations in surface vegetation."[3]