From Infogalactic: the planetary knowledge core
Jump to: navigation, search
For the folkloric being of Ghana and Togo, see adze (folklore). For the village in Bosnia-Hercegovina, see Adže.
"Adz" redirects here. For other uses, see ADZ (disambiguation) or Ad (disambiguation) 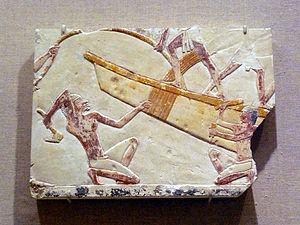 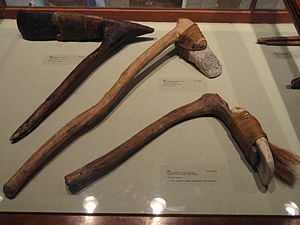 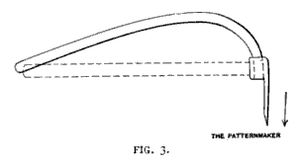 The adze (/ˈædz/; alternative spelling: adz) is a cutting tool shaped somewhat like an axe that dates back to the stone age. It can be any tool with a sharp cutting edge.[1] Adzes are used for smoothing or carving wood in hand woodworking, similar to an axe but with the cutting edge perpendicular to the handle. Two basic forms of an adze are the hand adze, a short handled tool swung with one hand, and a foot adze, a long handled tool capable of powerful swings using both hands, the cutting edge usually striking at foot or shin level. The blade of an adze is set at right angles to the tool's shaft (like a hoe or plane), in contrast to an axe's blade, which is in plane with the shaft. A similar, but blunt, tool used for digging in hard ground is called a mattock. 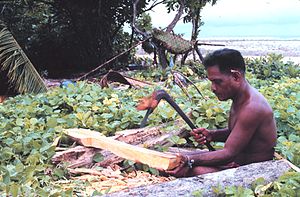 Micronesian of Tobi, Palau, making a paddle for his wa with an adze

In central Europe, adzes made by knapping flint are known from the late Mesolithic onwards ("Scheibenbeile"). Polished adzes and axes made of ground stone, such as amphibolite, basalt or Jadeite are typical for the Neolithic period. Shoe-last adzes or celts, named for their typical shape, are found in the Linear Pottery and Rössen cultures of the early Neolithic. Adzes were also made and used by prehistoric southeast Asian cultures, especially in the Mekong River basin.[citation needed]

The adze is depicted in ancient Egypt art from the Old Kingdom onward.[2] Originally the adze blades were made of stone, but already in the Predynastic Period copper adzes had all but replaced those made of flint.[3] While stone blades were fastened to the wooden handle by tying, metal blades had sockets into which the handle was fitted. Examples of Egyptian adzes can be found in museums and on the Petrie Museum website.

A depiction of an adze was also used as a hieroglyph, representing the consonants stp, "chosen", and used as: ...Pharaoh XX, chosen of God/Goddess YY...

The ahnetjer (Manuel de Codage transliteration: aH-nTr) depicted as an adze-like instrument,[4] was used in the Opening of the Mouth ceremony, intended to convey power over their senses to statues and mummies. It was apparently the foreleg of a freshly sacrificed bull or cow with which the mouth was touched.[5][6]

As iron-age technology moved south into Africa with migrating ancient Egyptians[citation needed], they carried their technology with them, including adzes. To this day, iron adzes are used all over rural Africa for various purposes - from digging pit latrines, and chopping firewood, to tilling crop fields - whether they are of maize (corn), coffee, tea, pyrethrum, beans, millett, yams or a plethora of other cash and subsistence crops.

Prehistoric Māori adzes from New Zealand, used for wood carving, were made from nephrite, also known as jade. At the same time on Henderson Island, a small coral island in eastern Polynesia lacking any rock other than limestone, natives may have fashioned giant clamshells into adzes.[7] 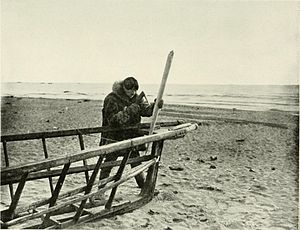 American Northwest coast native peoples traditionally used adzes for both functional construction (from bowls to canoes) and art (from masks to totem poles). Northwest coast adzes take two forms: hafted and D-handle. The hafted form is similar in form to a European adze with the haft constructed from a natural crooked branch which approximately forms a 60% angle. The thin end is used as the handle and the thick end is flattened and notched such that an adze iron can be lashed to it. Modern hafts are sometimes constructed from a sawed blank with a dowel added for strength at the crook. The second form is the D-handle adze which is basically an adze iron with a directly-attached handle. The D-handle therefore provides no mechanical leverage. Northwest coast adzes are often classified by size and iron shape vs. role. As with European adzes, iron shapes include straight, gutter and lipped. Where larger Northwest adzes are similar in size to their European counterparts, the smaller sizes are typically much lighter such that they can be used for the detailed smoothing, shaping and surface texturing required for figure carving. Final surfacing is sometimes performed with a crooked knife.[citation needed]

Ground stone adzes are still in use by a variety of people in Irian Jaya (Indonesia), Papua New Guinea and some of the smaller Islands of Melanesia and Micronesia. The hardstone is ground on a riverine rock with the help of water until it has got the desired shape. It is then fixed to a natural grown angled wood with resin and plant fibers. The shape and manufacture of these adzes is similar to those found from the Neolithic stone age in Europe. A variety of minerals are used. Their everyday use is on a steady decline, as it is much more convenient to cut fire wood using imported steel axes or machetes. However, certain ceremonial crafts such as making canoes, ceremonial shields, masks, drums, containers or communal houses etc. may require the use of traditional-made stone adzes.

Modern adzes are made from steel with wooden handles, and enjoy limited use: occasionally in semi-industrial areas, but particularly by 'revivalists' such as those at the Colonial Williamsburg cultural center in Virginia, USA. However, the traditional adze has largely been replaced by the sawmill and the powered-plane, at least in industrialised cultures. It remains in use for some specialist crafts, for example by coopers. Adzes are also in current use by artists such as Northwest Coast American and Canadian Indian sculptors doing pole work, masks and bowls. 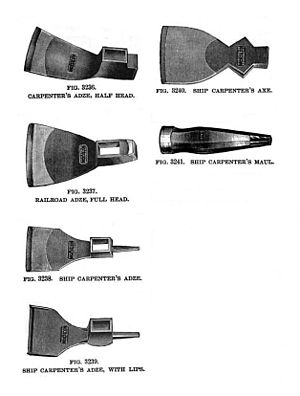 "Adzes are used for removing heavy waste, leveling, shaping, or trimming the surfaces of timber..."[8] and boards. Generally, the user stands astride a board or log and swings the adze downwards between his feet, chipping off pieces of wood, moving backwards as they go and leaving a relatively smooth surface behind.

Foot adzes are most commonly known as shipbuilder's or carpenter's adzes. They range in size from 00 to 5 being 3 1/4 to 4 3/4 pounds with the cutting edge 3 inches to 4 1/2 inches wide.[9] On the modern, steel adze the cutting edge may be flat for smoothing work to very rounded for hollowing work such as bowls, gutters and canoes. The shoulders or sides of an adze may be curved called a lipped adze, used for notching. The end away from the cutting edge is called the pole and be of different shapes, generally flat or a pin pole. 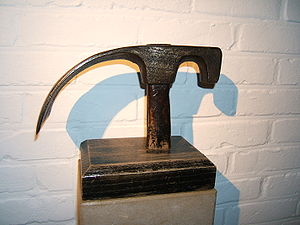