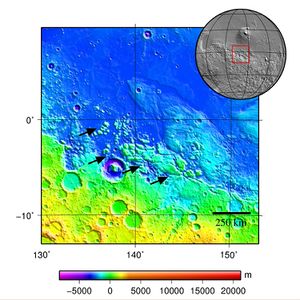 Aeolis Mensae is tableland feature in the Aeolis quadrangle of Mars. Its location is centered at 2.9° south latitude and 219.6° west longitude. It is 820 kilometres (510 mi) long and was named after a classical albedo feature name.[1]

Some places on Mars show inverted relief, in which a stream bed may be a raised feature, instead of a valley. The inversion may be caused by the deposition of large rocks or by cementation. In either case erosion lowered the surrounding land, but left the old channel as a raised ridge because the stream bed is more resistant to erosion. An image taken by HiRISE shows a ridge that may be old channels that have become inverted.[2]