From Infogalactic: the planetary knowledge core
Jump to: navigation, search
This article is about the organizational model. For the company, see Affinity Group Inc. 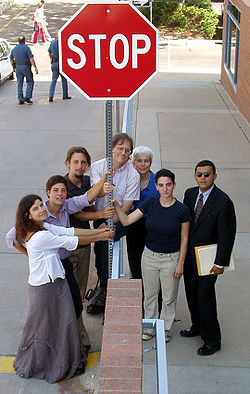 The anti-war Affinity group "Collateral Damage". All seven were convicted on December 4, 2002, of 2nd Degree Criminal Trespass for occupying the office of Senator Wayne Allard in protest of the impending war in Iraq

An affinity group is a group formed around a shared interest or common goal, to which individuals formally or informally belong. Affinity groups are generally precluded from being under the aegis of any governmental agency, and their purposes must be primarily non-commercial. Examples of affinity groups include private social clubs, fraternities, writing or reading circles, hobby clubs, and groups engaged in political activism.

Some affinity groups are organized in a non-hierarchical manner, often using consensus decision making, and are frequently made up of trusted friends. They provide a method of organization that is flexible and decentralized. Other affinity groups may have a hierarchy to provide management of the group's long-term interests, or if the group is large enough to require the delegation of responsibilities to other members or staff.

Affinity groups can be based on a common ideology (e.g., anarchism, pacifism), a shared concern for a given issue (e.g., anti-nuclear, anti-war) or a common activity, role, interest or skill (e.g., legal support, medical aid, black blocs). Affinity groups may have either open or closed membership, although the latter is far more common. Some charge membership dues or expect members to share the cost of the group's expenses.

Although affinity groups are a natural way for humans to organize[citation needed] and are, in that sense, as old as humanity, the origin of affinity groups in the current context began in the 16th century in Britain with dining clubs that would meet at a set location and at a recurring time. One of the earliest recorded examples of such was a group that called itself the "Fraternity of Sireniacal Gentlemen" which met at the Mermaid Tavern in London the first Friday night of each month. Membership was strictly limited and many of the Elizabethan Era's most prominent literary figures belonged. They gathered to eat, drink and socialize with other members, and to discuss literary matters.

During the 17th century, far more affinity groups formed, ranging from large, national or even international fraternal groups like the Freemasons to private gentlemen's clubs, to small, informal reading circles or collectors clubs. Unlike salons or other periodic gatherings that had continuously changing participants, affinity groups traditionally have had curated memberships. Often, a would-be member had to be proposed for membership by an existing member, or would-be members might petition to join on their own. The existing members often are required to vote upon whether or not to accept the applicant as a new member. Some voting procedures require unanimity (such as the Freemasons), others may a simple majority of supporting votes. After becoming a member, continuing membership may be contingent upon conforming to rules or shared ideologies, and the disbarring of members for a variety of reasons is possible.

Affinity groups fall under the category of NGOs, but are further limited by being primarily non-commercial, and are not required to have any specific purpose that might affect the community beyond their own group. For example, both a social justice group and a philately group would be considered affinity groups, but the former more closely resembles the classic definition of an NGO.

Affinity groups engaged in political activism date to 19th century Spain. It was a favourite way of organization by Spanish anarchists (grupos de afinidad), and had their base in the tertulias or in the local groups.[1]

Politically oriented affinity groups in the United States gained public attention during the anti-Vietnam War movement of the 1960s and 1970s. The term was first used by Ben Morea and the group Black Mask. Later, anti-war activists on college campuses organized around their hobbies or backgrounds -- religious, gender, ethnic group, etc. They became popular in the 1970s in the anti-nuclear movement in the United States and Europe. The 30,000 person occupation and blockade of the Ruhr nuclear power station in Germany in 1969 was organized on the Affinity group model.[2] [3] Today, the structure is used by many different activists: animal rights, environmental, anti-war, and anti-globalization, to name some examples.

The 1999 protests in Seattle which shut down the WTO Ministerial Conference of 1999 included coordinated organization by many clusters of Affinity groups.[4]

By definition, Affinity groups are autonomous from any larger body. Co-ordinated effort and co-operation amongst several Affinity groups, however, is often achieved by using a loose form of confederation. Private clubs, for example, may cooperate through reciprocal agreements which allow the members of one club to use the facilities of another club in a different location. Other affinity groups, such as Rotarians or Toastmasters, may be individual units that conform to shared standards so that one may participate in another group of the same name anywhere on earth without requiring the individual to reapply for a new membership.

Affinity groups tend to be loosely organized, however there are some formal roles or positions that commonly occur. A given Affinity group may have all, some or none of these positions. They may be permanent or temporary and the group may opt to take turns in these roles, or assign one role to one person.