From Infogalactic: the planetary knowledge core
Jump to: navigation, search
This article is about the spice. For the similarly named Luso-Brazilian chili pepper, see Malagueta pepper. For the album by Erik Friedlander, see Grains of Paradise (album).

Aframomum melegueta is a species in the ginger family, Zingiberaceae. This spice, commonly known as grains of paradise, Melegueta pepper, alligator pepper, Guinea grains, fom wisa, or Guinea pepper, is obtained from the ground seeds; it imparts a pungent, peppery flavour with hints of citrus.

Although it is native to West Africa, it is also an important cash crop in the Basketo district (Basketo special woreda) of southern Ethiopia.[1] The Pepper Coast (or Grain Coast) is a historical coastal region named after this commodity.

The pungent, peppery taste of the seeds is caused by aromatic ketones; e.g., (6)-paradol (systematic name: 1-(4-hydroxy-3-methoxyphenyl)-decan-3-one). Essential oils, which are the dominating flavor components in the closely related cardamom,[2] occur only in traces.

The stem at times can be short and usually shows signs of scars and fallen leaves. The average leaves are usually 35 cm in length and 15 cm wide, with a well-structured vascular system. The flowers of the herbaceous plant are described as "handsome" aromatic, with an orange-colored lip and rich pinkish-orange upper part. The fruits contains numerous, small, golden red-brown seeds. 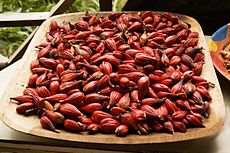 A. melegueta pods at a market in São João dos Angolares, São Tomé Island, the fruits are eaten raw in that nation's cuisine and the local name is ossame.

Melegueta pepper is commonly used in the cuisines of West and North Africa, where it has been traditionally imported by caravan routes through the Sahara desert, and whence they were distributed to Sicily and the rest of Italy. Mentioned by Pliny as "African pepper" but subsequently forgotten in Europe, they were renamed "grains of paradise" and became a popular substitute for black pepper in Europe in the 14th and 15th centuries.[3][4][5] The Ménagier de Paris recommends it for improving wine that "smells stale". Through the Middle Ages and into the early modern period, the theory of the four humours governed theorizing about nourishment on the part of doctors, herbalists and druggists: in this context, John Russell characterized grains of paradise, in The Boke of Nurture as hot and moist.[6]

In 1469, King Afonso V of Portugal granted the monopoly of trade in the Gulf of Guinea to Lisbon merchant Fernão Gomes,[7] including the exclusive trade of Aframomum melegueta, then called "malagueta" pepper - which was granted by 100 000 real-annually in exchange for exploring 100 miles of the coast of Africa a year for five years.[8] After Christopher Columbus reached the New World in 1492 and brought the first samples of Capsicum frutescens, the name malagueta was then taken to the new chili "pepper".[4] Malagueta, thanks to its low price, remained popular in Europe even after the Portuguese opened the direct maritime route to the Spice Islands around 1500.[9]

The importance of the spice is shown by the designation of the area from the St. Johns River (present day Buchanan) to Harper in Liberia as the "Grain Coast" in honor of the availability of grains of paradise.[10] Later, the craze for the spice waned, and its uses were reduced to a flavoring for sausages and beer. In the 18th century, its importation to Great Britain collapsed after a Parliamentary act of George III forbade its use in malt liquor, aqua vita, and cordials.[11] In 1855, England imported about 15,000 to 19,000 lbs per year legally (duty paid).[10] By 1880, the Encyclopaedia Britannica (9th edition) was reporting, "Grains of paradise are to some extent used in veterinary practice, but for the most part illegally to give a fictitious strength to malt liquors, gin, and cordials".[12]

Today, it is sometimes used in gourmet cuisine as a replacement for pepper, and to give unique flavors in some craft beers, gins, and Norwegian akvavit. In America, grains of paradise are starting to enjoy a slight resurgence in popularity due to their use by some well-known chefs. Alton Brown is a fan of its use, and he uses it in okra stew and his apple pie recipe on an episode[15] of the TV cooking show Good Eats. They are also used by people on certain diets, such as a raw food diet, because they are less irritating to digestion than black pepper.

In West African folk medicine, grains of paradise are valued for their warming and digestive properties, and among the Efik people in Nigeria have been used for divination and ordeals determining guilt.[16] A. melegueta has been introduced to the Caribbean and Latin America, where it is used in religious (voodoo) rites.[17][18]