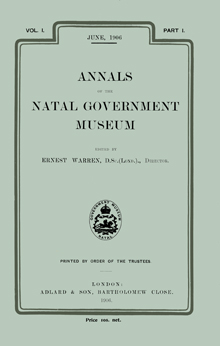 African Invertebrates was established in 1906 as the Annals of the Natal Government Museum that changed its name later to the Annals of the Natal Museum. The journal has a continuous history of more than 100 years, with over 800 natural history articles and more than 5,000 nomenclatural acts published.[1] Originally printed copies of the journal back to 1906 are still available. Archival issues are also freely available in digital form through the SABINET African Journal Archive.

A wide range of natural science topics has been covered in the Annals of the Natal Museum and subsequently in African Invertebrates. Besides taxonomy and systematics of various animal groups, papers dealing with embryology, histology, medical and agricultural entomology, terrestrial and marine ecology, botany, geography, palaeontology, general geology, with special reference to petrography and stratigraphy, and nature conservation have been published. The coverage of animal taxa includes representatives of Protozoa, Porifera, Cnidaria, Plathelminthes, Nematoda, Rotifera, Onychophora, Arthropoda (including Crustacea, Chelicerata, Trilobita, Myriapoda, Insecta), Annelida, Bryozoa, Mollusca, Sipunculida, Echinodermata, and Hemichordata.

African Invertebrates is abstracted and indexed in the Science Citation Index, The Zoological Record, BIOSIS Previews, Scopus, and GeoRef. According to the Journal Citation Reports, its 2009 impact factor was 1.216, ranking it 53rd among 129 journals in the category "Zoology".