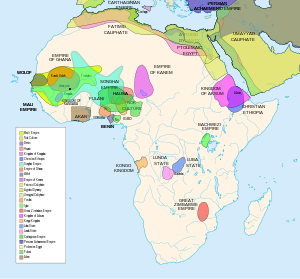 African Empires was an umbrella term used in African studies to refer to a number of historical states in Africa with multinational structures incorporating various populations and polities into a single entity, usually through conquest.[1][2][3][4][5][6][7]

Listed below are known African empires and their respective capital cities. 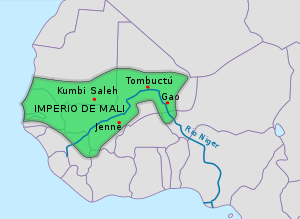 The Sahelian kingdoms were a series of medieval empires centred on the sahel, the area of grasslands south of the Sahara.

From the 15th century until the final Scramble for Africa in the late 19th century a number of empires were also established south of the Sahel, especially in West Africa.

The West African empires of this period peaked in power in the late 18th century, paralleling the peak of the Atlantic slave trade. These empires implemented a culture of permanent warfare in order to generate the required numbers of captives required to satisfy the demand for slaves by the European colonies. With the gradual abolition of slavery in the European colonial empires during the 19th century, slave trade again became less lucrative and the West African empires entered a period of decline, and mostly collapsed by the end of the 19th century.[9]

The Mutapa Empire or Empire of Great Zimbabwe (1450–1629) was a medieval kingdom located between the Zambezi and Limpopo rivers of Southern Africa in the modern states of Zimbabwe and Mozambique. Remnants of the historical capital are found in the ruins of Great Zimbabwe. 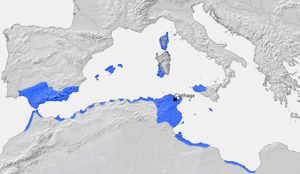 Ancient Carthage and its dependencies in 264 BC. 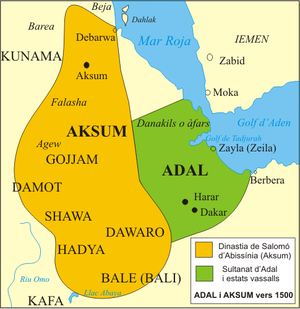 Domains of the Aksumite Empire and the later Adal Sultanate.