Agilent Technologies is an American public research, development and manufacturing company established in 1999 as a spin-off from Hewlett Packard. The resulting IPO of Agilent stock was the largest in the history of Silicon Valley at the time.[1][2]

Agilent serves analytical laboratories and the clinical and routine diagnostics markets with a full suite of TECHNOLOGY PLATFORMS and SOLUTIONS. These include:[6]

Agilent also provides the LAB MANAGEMENT SERVICES and CHEMISTRIES AND SUPPLIES needed to operate and optimize the science and economics of the lab:[6]

For a complete listing of Agilent products and services, see products & services, Agilent CrossLab and solutions. 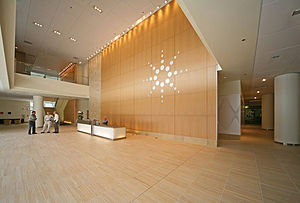 Agilent Technologies was created in 1999 by the spin-off of Hewlett-Packard's (HP's) "Medical Products and Instrument Group",[7] including instrumentation and chemical analysis, electronic component and medical equipment product lines.[8][note 1] The split was predicated on the difficulty of growing HP's revenue stream and on the competitive vigor of smaller, more agile competitors.[9] The company's launch slogan was "Innovating the HP Way", which capitalized on the strong HP corporate culture.[9] The starburst logo was selected to reflect "a burst of insight" (or "spark of insight")[10] and the name "Agilent" aimed to invoke the notion of agility as a trait of the new firm.[9] The Agilent spin-off was accompanied by an initial public offering which raised US$2.1 billion, setting a record at the time.[1]

In the early 2000s, "economic uncertainty" depressed demand for Agilent's products,[11] including slow sales of health care products to hospitals in the United States, which accounted for 60% of the company's revenue at the time.[7] The downturn also struck sales in the communications and semiconductor markets, where orders amounting to US$500 million were canceled by buyers.[12] These poor economic conditions prompted large reductions in force; from a headcount in 1999 of 35,000, which had risen to 48,000 by May 2001,[12] it had by early 2003 cut 18,500 positions.[11] In 2001, in midst of this downsizing, Agilent sold its health care and medical products organization to Philips Medical Systems,[13] and was noted as having a valuation of about US$11 billion.[14] HP Medical Products had been the second oldest part of Hewlett-Packard, acquired in the 1950s.[citation needed]

In August 2005, Agilent announced the sale of its semiconductor business, which produced chips for a wide range of consumer and industrial uses, to Kohlberg Kravis Roberts and Silver Lake Partners for US$2.66 billion.[1] This move was part of a broad effort to concentrate "on the test-and-measurement business at its historic core," and would entail termination of about 1,300 of the company's 28,000 employees.[1] The group operated as a private company, Avago Technologies, until August 2009, when it was brought public in an IPO. It continues to operate under the same name as a publicly traded corporation.

Also in August 2005, Agilent sold its 47% stake in the light-emitting diode manufacturer Lumileds to Philips for US$1 billion.[1] Lumileds originally started as Hewlett-Packard's optoelectronics division.

Also in August 2005, Agilent announced a plan to divest its semiconductor test solutions business, composed of both the system-on-chip and memory test market areas.[1] Agilent listed the new company as Verigy, mid-2006 on NASDAQ.

In 2011, the company along with the University of California, Davis, announced that it would be establishing the "Davis Millimeter Wave Research Center".[16]

Agilent announced it would increase its life sciences engagement through the acquisition of Halo Genomics, based in Uppsala, Sweden, which was involved in next-generation sequencing technology development.[17]

On May 17, 2012, Agilent agreed to buy Dako, a Danish cancer diagnostics company, for US$2.2 billion, to expand its presence in the life sciences industry.[18]

On Oct. 14 the company announced that it is exiting its Nuclear Magnetic Resonance business.[21]

On Nov. 1 the formal separation of Agilent and Keysight Technologies was completed.[2] Agilent announced it has completed the spin-off of its electronic measurement business, Keysight Technologies. Keysight begins trading on the New York Stock Exchange today under the symbol KEYS. The separation was implemented through a spinoff of Keysight’s common stock and is intended to be tax-free for U.S. federal income tax purposes. On Nov. 1, 2014, in a special dividend distribution of all outstanding shares of Keysight’s common stock, Agilent shareholders received one share of Keysight common stock for every two shares of Agilent common stock held as of close of business Oct. 22, 2014.

Agilent's inaugural president and chief executive officer was Ned Barnholt,[9] and he retained this post at least through 2006.[13] Barnholt had originally joined Hewlett-Packard in 1966.[23]

In September 2014, William (Bill) Sullivan announced plans to retire as Agilent's CEO.[24] Mike McMullen, then president of the company's Chemical Analysis Group, was to succeed Sullivan as CEO.[24] As part of the succession plan announcement, McMullen was promoted to the roles of president and chief operating officer (COO).[24]

In 2015, McMullen was elected by Agilent's board of directors to the post of CEO, becoming Agilent's third CEO.[24][25]