The Rhodesian Air Force (RhAF) was reconstituted into the Air Force of Zimbabwe in 1980. The RhAF's 12 Hunter FGA.MK 9s were joined by other aircraft in 1981, 1984 and in 1987, from Kenya and the British Royal Air Force. Pakistan Air Force trained most of the Zimbabwean Pilots in the initial days along with construction of Thorn Hill Air base, Pakistan also sent Air Marshal Azim Daudpota to Zimbabwe as a Chief of Air Staff of the Zimbabwean Air Force

In 1981, the Air Force of Zimbabwe ordered 8 eight Hawk MK60s, which were delivered in July 1982. On the night of 25 July 1982 a sabotage attack on Thornhill airbase damaged four Hawks, nine Hunters and a single FTB-337G. One Hawk was written off, another was repaired on site and the other two were returned to BAE for a rebuild. A follow-up order for five additional Hawks was completed in September 1992.

The first supersonic interceptor operated by the air force was the F7 Airguard, 12 of the IIN and II variants were delivered in 1986. In 1993, a pair of O-2As were delivered for anti-poaching patrols over Zimbabwe's national parks. Two Cougar helicopters were reported to be in use in 1997. One was delivered in April 1995 and the second in September 1996. They were used for VIP duties.

Zimbabwe's well-trained military entered the war as the best equipped side. In mid-August 1998, the AFZ deployed five or six F-7s, most of the C.212s, at least four Cessna 337G Lynxs, and a dozen or more helicopters, including Alouettes, Bell 412s and Mi-35s, to Congo. All aircraft were flown by Zimbabwean pilots. After receiving an urgent shipment of spare Hawks, the AFZ apparently deployed some of them as well. At the start of the war, the Hawks had been reported to be in unflyable condition. Due to these circumstances the AFZ contingent in the Congo in August and September 1998 consisted of flights from No.3, No.4, No.5, No.7 and No.8 Squadrons, while a flight from No.2 Squadron was to follow later.

The No.2 AFZ Squadron deployed 12 BAe Hawk T.Mk.60/60As, which were used as strike-fighters and equipped with AIM-9B Sidewinder AAMs, Mk.82-series bombs, and Hunting BL.755 cluster-bomber units (CBUs), as well as launchers for unguided rockets. Only six or seven F-7s From No.5 squadron were fully mission-capable. Prior to the war in Congo, Zimbabwe was in the middle of negotiations with China for 12 additional F-7s.

For transport, the AFZ had the No.3 Squadron, flying 12 CASA C-212 Aviocar and six Britten-Norman BN-2A Islander light transports which had already seen heavy service, and were to see even more of this in Congo. Transport and liaison were also duties of the No.7 Squadron, equipped with Aérospatiale SA 316B Alouette IIIs (including ex-Portuguese Air Force-and Romanian IAR-built examples), as well as of the No.8 Squadron, equipped with Agusta-Bell 412SPs which were later armed with rocket launchers for this war. However, the latter unit would soon play a significant role in the war in DRC, as it was only recently equipped with the newest addition to the AFZ: six Mi-35 helicopters (including two Mi-35Ps). The first AFZ Mi-35-crews were trained at Thornhill AB, in Gweru, by Russian instructors. CO of this unit was Sqn.Ldr. Mukotekwa.

The first noted AFZ operation took place on 26 August 1998, where they destroyed a 5 km armoured column of rebels as they were approaching Kinshasa.[2] After defeating the invaders in Kinshasa, the Zimbabweans, in the belief that Kabila's government was already safe, suggested that there was no need to continue the war, and peace should be negotiated. This resulted in the reinforcement of rebel efforts as well as the Rwandans and Ugandans rushing better-equipped units into the battle. The garrisons in eastern Congo that remained loyal to Kabila fell to rebel attacks. The Ndigili airport, in Kibanseke Province, as well as Kitona, both held by Zimbabwean troops, were attacked simultaneously. In both cases the AFZ responded with fierce air strikes. Rebels claimed that up to 100 civilians were killed by their bombs.

A series of fierce battles were fought between 4 and 13 September 1998, during which the Angolan mechanised forces were finally able to deploy their full firepower. The Chadian contingent was meanwhile deployed in NE Congo, where it participated in re-capture of Lubutu. The AFZ and FAC were active in this area for several days, flying a number of strikes during which cluster-bomb units (CBUs) were used. According to government reports 45 rebels were killed and 19 captured in this battle

On 13 September, when the Angolans attacked towards Kamina, the Zimbabweans found themselves under fierce attacks by thousands of rebels in the Manono area. It was in this area that the AFZ suffered its first documented loss of this war: on 4 September the Aermacchi SF.260 flown by Sqn.Ldr. Sharunga crashed in bad weather, killing the pilot. Nine days later an Alouette III helicopter carrying several high-ranking officers, including Col. Kufa and Sqn.Ldr. Vundla, was shot down by rebels in eastern central Congo. Kufa and Vundla were killed, while Flt.Sgt. Sande was captured by RCD.

In late October 1998, the Zimbabweans launched an offensive in SE Congo. The offensive was made possible owing to the deployment of additional foreign troops in Congo, including some 2,000 Namibians. This began with a series of air strikes, partially flown by BAe Hawk T.Mk.60s of the No.2 Squadron, newly deployed in Congo, and by F-7s of the No.5 Squadron. These units first targeted airfields in Gbadolite, Dongo and Gmena, and then rebel and Rwandan communications and depots in the Kisangani area, on 21 November. On the following day the No.2 Squadron launched a strike package of six aircraft, armed with Mk.82 bombs and Matra 155 rocket launchers for unguided rockets calibre 68mm, which reached out far over central Congo. They deployed over Lake Tanganyika and attacked ferries used to transport Burundi troops and supplies into the war in Congo. According to Zimbabwean reports their strike came as a complete surprise. With machine-guns and light infantry weapons as the only means of air defense, six ferries were sunk and 600 Burundi and Rwandan troops killed. In a similar attack, on 7 December 1998, Zimbabwean planes or helicopters sank two rebel boats on Lake Tanganyika some 40 km north of Moba.[3]

In November 1998, it was reported that a $54 million shipment of helicopters, fighters and spotter aircraft had arrived in Zimbabwe to assist in the Democratic Republic of Congo. It is unclear who received the delivered weapons. There were only very few reports about the fighting in the next few days, probably because the Congolese, Zimbabwean and Angolan governments found themselves under heavy pressure from Western powers because of this offensive. The few reports released from sources close to the rebels indicated Zimbabwean and Congolese attacks on Nuyuzu, Kasinge and towards Manono, supported by T-62 tanks and heavy artillery. According to Zimbabwean reports the Hawks and F-7s continued their operations and made additional attacks against Kalemi on 24 November, and a new round of strikes against different airfields in eastern Congo two days late. After the attacks the pilots of No.5 Squadron claimed destruction of an unidentified An-12 transport on the ground.[4]

The AFZ is subdivided into the Administration Wing, the Engineering Wing, the Flying Wing, and the Regimental Wing.[5] The Administration Wing supports equipment purchasing, recruitment, staff support, food supplies, and related functions. The Engineering Wing maintains and inspects aircraft and related equipment, and covers the School of Technical Training, a tertiary education institution responsible for training aircraft maintenance engineering technicians. The training institute is the only federation aviation school in Africa. The Flying Wing handles aircrew personnel divided into eight squadrons at three primary bases. It also covers the schools for flying and parachute training. The Regimental Wing covers those squadrons specially selected to guard other AFZ assets, such as personnel and installations.[5] and weapon ativations. 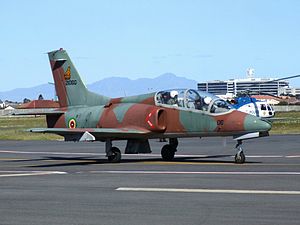 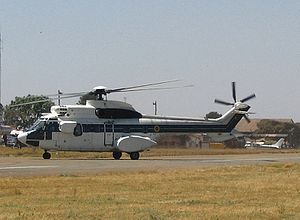 Zimbabwe has been interested in MiG-29s in both the recent and more distant past. A 300 million-plus US dollar order for a squadron was placed with Russia in the late 1980s but was cancelled in 1992.[7] Negotiations to buy 14 MiG-29SMTs from Russia were held again in 2004 [8] but an order for Chengdu FC-1 fighters was apparently placed instead.[9] See The Military Balance, 2005 to 2009 issues.

In descending order, the AFZ officer ranks are:

In descending order, the AFZ airman ranks are:

Exact figures for the Air Force of Zimbabwe's aircraft losses have not been publicly published. It is believed four Hawks were lost, three F7s and several helicopters.