Airman first class is a rank that has also been used by the U.S. Navy and the U.S. Coast Guard, although it is not currently in use. In documents about the history of U.S. armed forces, you will frequently see this rank abbreviated as "A1C".

Promotion to airman first class occurs upon one or more of the following: 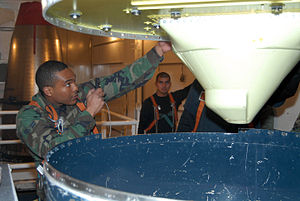 Those personnel who qualify for these early promotions to airman first class wear the insignia of this rank during their basic training graduation ceremonies at Lackland Air Force Base in San Antonio, Texas, except for those who signed up for an extended enlistment. They will receive their promotions to airman first class twenty weeks after graduation from basic military training or graduation from their technical training schools, whichever comes first. Enlistees who have signed up for initial six-year enlistment periods have usually qualified and done so in return for a guarantee of up to two years of training in Department of Defense and Air Force schools in highly-technical specialities such as electronics, weapons systems, physician's assistant or nursing. To qualify for all of this, the enlistee must have graduated from high school and scored highly on Air Force technical aptitude tests. On the bottom line, they spend up to two years in training at the expense of the Air Force, and then they pay back by serving at least an additional four years after their schooling. They also get an early promotion to airman first class as additional compensation.[Note 1]

Those who are promoted to this level upon completion of basic training also receive a retroactive pay increment that brings them up to the E-3 pay grade corresponding to airman first class, going back to day one of their enlistment. In other words, they get paid as if they had enlisted as an airman first class. However, if for some reason they get expelled from basic training, they do not receive this extra pay, and just get paid as airmen basic for the time that they spent in the Air Force before getting discharged.

Airmen first class are considered to be fully adjusted to Air Force and military life, and their duties focus on efficiently and effectively carrying out their assignments and honing their job skills.

From 1947 to 1952, this rank was known as an Air Force corporal, and from 1952 to 1967 it was called an airman second class. Also during this time frame, the E-4 paygrade rank, now known as senior airman, was called airman first class.

Airmen first class are often nicknamed "dragonfly wings" due to the insignia's resemblance to that animal's two pairs of wings.