The Lahore Fort, locally referred to as the Shahi Qila (Urdu/Punjabi: شاہی قلعہ, Royal Fort), is a citadel in the city of Lahore, Punjab, Pakistan.[1] It is located in the northwestern corner of the Walled City of Lahore in Iqbal Park, which is one of the largest urban parks in Pakistan. The trapezoidal composition is spread over 20 hectares.[2]

Origins of the fort extend far into antiquity but the existing base structure was built during the reign of Mughal Emperor Akbar between 1556–1605. It was regularly upgraded by subsequent Mughal rulers and after the fall of the Mughal Empire it fell to Sikh and British rulers. It has two gates. One of the gates built by Aurangzeb is called Alamgiri gate that opens towards Badshahi mosque and another older gate built by Akbar is called Maseeti[note 1] or Masjidi gate that opens towards Maseeti area of Walled city. Currently Alamgiri Gate is used as the principal entrance while Maseeti Gate is permanently closed. The fort manifests the rich traditions of Mughal architecture.[3] Some of the famous sites inside the fort include Sheesh Mahal, Alamgiri Gate, Naulakha Pavilion, and Moti Masjid. Akbar also called as Akbar the great

In 1981, the fort was inscribed as a UNESCO World Heritage Site along with the Shalimar Gardens. The Pakistan Pavilion at Expo 2010 is designed as a replica of the fort.[4] 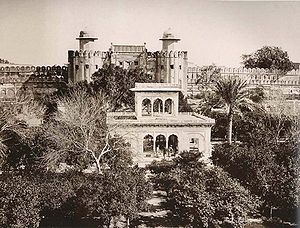 A picture showing the Lahore Fort and Hazuri Bagh Pavilion in 1870. 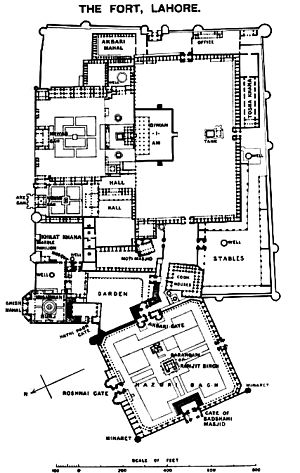 The origins of Lahore Fort are obscure and traditionally based on various myths[5] It is unknown who first built a fort there. According to some Hindu myths, its foundation was attributed to Loh, the mythical son of Lord Rama.[2] However, the first historical reference to a fort ever actually existing on that location goes back to the 11th century, during the time of Mahmud of Ghazni.[2] It was a weak mud fort that was subsequently destroyed.[6] The earliest reference for this is that in the 1240s, it was destroyed by Mongols. After nearly 50 years, a new fort was constructed in its place by Balban of Mamluk dynasty.[7] It was destroyed again around 1399 by the invading forces of Timur only to be rebuilt by Sultan Mubarak Shah Syed after 20 years.[8] In the 1430s, the fort was occupied by Shaikh Ali of Kabul.[9]

The present design and structure of the fort, however, traces its origins to the Mughals. In 1575, Mughal emperor Akbar occupied the fort, which was used to guard the northwest frontier of the kingdom.[10] He rebuilt the fort with solid bricks and lime and over time lofty palaces were built to which additional beauty was lent by luxuriant gardens.[11] The other structures built by him included the Doulat Khana-e-Khas-o-Am, Jharoka-e-Darshan, and Masjidi Gate. On the other hand, his structures were replaced by subsequent rulers.[12] However the structures built by him were replaced by subsequent rulers.[10] Shah Jahan built the Shah Burj, the Sheesh Mahal and the Naulakha Pavilion. His son Aurangzeb built the entrance, Alamgiri Gate, which is flanked by semi-circular towers with domes pavilions.[13]

The fort was captured by the Maratha forces under Raghunathrao in 1758.[14] Then the Bhangi Sikh Dynasty (1716–1810), one of the 12 Sikh Kingdoms of the Punjab ruled the city of Lahore from 1760 until 1799. When Ranjit Singh, another Sikh chief from the Gujranwala area, took Lahore from the Bhangi Misl the Lahore Fort fell to Ranjit Singh and in 1801 he was crowned as the emperor of all of the Punjab.[15] The fort and the city from 1799–1849 remained under the control of Ranjit Singh and his sons, grandsons, and wives until the fall of the last Sikh empire in 1849.[16]

Excavations in 1959 in front of Diwan-i-Am led to the discovery of a gold coin dated 1025 AD belonging to Mahmud of Ghazvani. The coin was unearthed at the depth of 25 feet (7.6 m) from the lawn. The cultural layers were continuous to the depth of 15 feet (4.6 m) indicating that the fort was inhabited by people even before his conquest.

While relaying the deteriorated floor of Akbari Gate in April 2007, three floors in the fort were unearthed belonging to the British, Sikh and Mughal period. The floor of the British, Sikh and Mughal periods were constructed with bricks, burnt bricks and pebbles respectively. The latter either built during Jahangir’s or Shah Jahan’s era was the hallmark of Mughals.[17]

In April 2006, it was reported that officials had urged UNESCO to remove the name of the fort from the list of endangered World Heritage Sites because of extensive restoration work funded by Norway, Hong Kong, the United Kingdom and France.[18]

Though in 1990, UNESCO had ordered the Punjab Archaeological Department to bar the use of the Fort for state or private functions on account of historical significance, a wedding reception was held in violation on December 23, 2010. The Antiquities Act of 1975, which prohibits the use of historical places to protect them from damage, was violated in the following month by hosting a dinner in the Diwan-i-Khas.[19]

In April 2013 an exhibition of Sikh artefacts took place at the fort premises. It was titled Glorious Sikh Heritage under One Roof. Rare artefacts belonging to Ranjit Singh's reign, agreement documents between the British and the Sikh, weapons, and jewellery were amongst the exhibits.[20]

The strategic location of Lahore city between the Mughal territories and the strongholds of Kabul, Multan, and Kashmir necessitated the dismantling of the old mud-fort and fortification with solid brick masonry.[21] The structure is dominated by Persian gardens influence that deepened with the successive refurbishments by subsequent emperors.[22] The fort is divided into two sections: first the administrative section, which is well connected with main entrances, and includes gardens and Diwan-e-khas for royal audiences. The second, a private and concealed residential section is divided into courts in the north and accessible through elephant gate. It also contains Sheesh Mahal, spacious bedrooms and small gardens.[23] The exterior walls are decorated with blue Persian Kashi tiles. The original entrance faces the Maryam Zamani Mosque and the larger Alamgiri gate opens towards Hazuri Bagh through the majestic Badshahi mosque.[24] Influence of Hindu architecture is seen in the zoomorphic corbels which does not show Mughal ones.[2]

The Diwan-i-Aam was the Hall of commons. It was built by Shah Jahan in 1628. The kings regularly had with the common people in this hall. Its design is similar to the Diwan-i-Aam at the Agra Fort. The hall has forty pillars and was built in front of a balcony.[25] It was destroyed when a Sikh ruler Sher Singh bombarded the fort in his fight against Maharani Chand Kaur, the wife of Mahraja Kharak Singh. It was later restored by the British in 1849.[26] 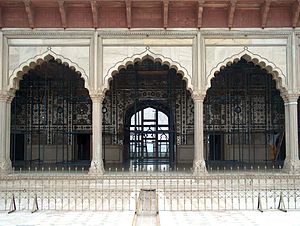 The Sheesh Mahal[note 2] is the palace of mirrors and was built by Mirza Ghiyas Begh, the father of Mumtaz Mahal around 1631 during the rule of Shah Jahan. It consists of a spacious hall with several halls behind. This was the harem of the fort. There is a marble perforated screen in the rear chamber which is carved of tendril, floral and geometrical patterns. Pietra dura work can be seen on its walls.[26]

It is a quadrangle consisting of royal ladies quarters and harem. Its construction was started by Akbar and was ended by Jahangir in 1618. The buildings were constructed over subterranean chambers especially those in the northern, western and eastern borders. Its iwans typically represents the architecture during Akbar reign. The quadrangle measures 372 x 245 metres. The quadrangle has a garden called Chahar Bagh bordered by walkways and fountains. During the British period the quadrangle was modified to accommodate the officers according to requirements of the army.[27]

Khwabgah was the bedroom of Shah Jahan. It was built by Shah Jahan under the supervision of Wazir Khan in 1634 during his first visit to the city.[26] It is the first building built by Shah Jahan in the fort. At present its decorations have vanished except for a trace of the marble which once might have beautified the façade.[27] 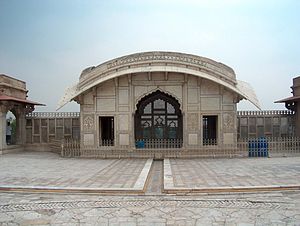 The pavilion was built during the reign of Shah Jahan for a cost of 9 lakh rupees.[28] Situated in the west of Sheesh Mahal, the pavilion is rectangular in shape and prominent owing to its centrally arched and extraordinarily curved roof representing the unique feature of architecture during Shah Jahan reign.[29] It reflects a mixture of contemporary traditions at the time of its construction of sloping-roof from Bengal and Baldachin from Europe, which makes evident the imperial as well as religious image of the pavilion.[30] The marble shades of the pavilion are capped with merlons to hide view from the grounds.[31] 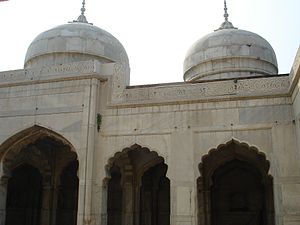 Moti Masjid[note 3] is a 17th-century mosque built inside the fort during the reign of Shah Jahan. It is constructed of white marble brought from Makrana. The facade is composed of cusped arches and engaged baluster columns, which has smooth and fine contours. It has three domes, a raised central pishtaq and two aisles of five bays.Unlike other contemporary mosques, which have three arches, this mosque has five arches in the facade. During the rule of Maharaja Ranjit Singh, it was forcibly converted into a Sikh temple called Moti Mandir.[32] 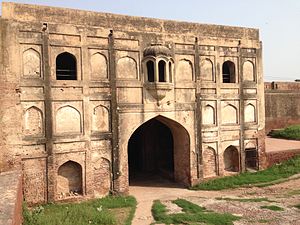 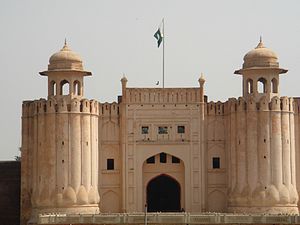 Mughal Emperor Akbar built two gates. Akbari Gate was built in 1566 and now called Maseeti Gate. One of Akbar's wives built a mosque outside the gate around 1614.[26] The other gate was replaced later by the Alamgiri Gate. The Alamgiri Gate is the entrance of the fort. It was built by Mughal emperor Aurangzeb in 1674.[33] It has two semi-circular bastions where lotus petal design adorns at the base of it.[34]

The Naag temple is a Sikh temple built by Chand Kaur, the wife of Kharak Singh who was the son of the then ruling Maharaja Ranjit Singh. The temple is square in plan and built on a raised platform. Its exterior walls are covered with fresco paintings. The temple also has a water-melon shaped dome. As of September 2011, it is a no-go area for the public as officials consider that they can vandalize it by graffiti. It also required more security, which the government was unable to afford.[35]

Mai Jindan Haveli is of unknown origins and believed to be a Mughal structure but attributed to the Mai Jindan, Chand Kaur because of the extensive additions by the Sikhs. It is a two storied building where she is alleged to be murdered. Presently this building serves as a museum.[27] Kharak Singh Haveli was the haveli of Kharak Singh, the heir to Ranjit Singh. It lies in the south-east of the Jahangir's Quadrangle. It was later occupied by the British where the first and the ground floor were used as a Commandant's Quarters and godown and servants house respectively. Currently it houses the archaeological survey office.[27] 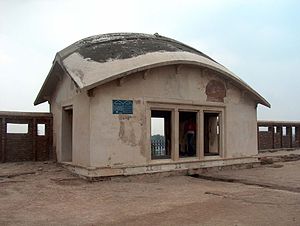 Khilwat Khana was built by Shah Jahan in 1633 in the north of the Paen Bagh. It was the residence of the royal ladies of the court.[36] The plinth and door frames are made of marble with a curvilinear roof.[26] In the northwest of Khilwat Khana, lies a watch tower called Kala Burj. It was used as a summer pavilion. The topmost storey was built and used as bar during the British era. Its eave is interlocked with brick work.[26] 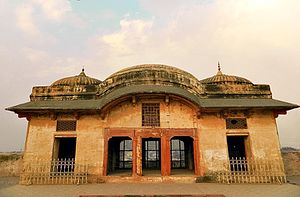 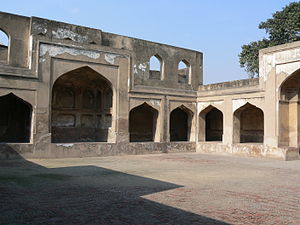 Maktib Khana was constructed under the supervision of Mamur Khan during the reign of Mughal Emperor Jahangir. It was used as the entrance gate to the fort by the clerks.[26] Besides, the fort also houses separate bath for royal men and women.[27]

In 1980, Government of Pakistan nominated the fort for inclusion in UNESCO World Heritage Site based on the criteria i, ii, and iii together with the Shalimar.[2] In the fifth meeting session held in Sydney in October 1981, the World Heritage Site committee added both the monuments to the list.[37] However, in 2000, Pakistan sent a letter to the organization to include both the sites in List of World Heritage in Danger and sought help to restore the damaged part of the outer walls and hydraulic works of Shalamar Gardens.[38][39] After years of extensive renovation and restoration work, they were removed from the list in June 2012.[40][41]