George Alexander "Alex" Trebek (/trᵻˈbɛk/; born July 22, 1940) is a Canadian American television personality. He has been the host of the syndicated game show Jeopardy! since 1984, and has also hosted a number of other game shows, including The Wizard of Odds, Double Dare, High Rollers, Battlestars, Classic Concentration and To Tell the Truth. Trebek has made appearances in numerous television series, usually portraying himself. A native of Canada, he became a naturalized United States citizen in 1998.[1]

Trebek was born in Sudbury, Ontario, in 1940,[3] the son of George Edward Trebek, a chef who had emigrated from Ukraine as a child, and the former Lucille Lagacé, a Franco-Ontarian.[4] He grew up in a bilingual French-English household.[5]

Trebek graduated from Lisgar Collegiate Institute in 1957 before graduating from Toronto's Malvern Collegiate Institute in 1958, and later the University of Ottawa with a degree in philosophy in 1961.[6] As a student at the University of Ottawa, he was a member of the English Debating Society. Interested in a career in broadcast news, he began his broadcasting career working for the CBC as a newscaster and sportscaster. Trebek specialized in national news and covered a wide range of special events for the CBC's radio and television divisions, including curling[7] and horse racing.[8]

Trebek's first hosting job was on a Canadian music program called Music Hop in 1963. In 1966 he hosted a high school quiz show called Reach for the Top. From 1967 to 1970 he was a host for the CBC, introducing classical music programs including performances by Glenn Gould. In 1973 he moved to the United States and worked for NBC as host of a new game show, The Wizard of Odds. A year later Trebek hosted the popular Merrill Heatter-Bob Quigley game show, High Rollers, which had two incarnations on NBC (1974–76 and 1978–80), and an accompanying syndicated season (1975–76). In between stints as host of High Rollers, Trebek hosted the short-lived CBS game show Double Dare (not to be confused with the 1986 Nickelodeon game show of the same name). Double Dare turned out to be his only game show with the CBS network (he returned to CBS in 1994 to host Pillsbury Bake-Off until 1998), and the first show he hosted for what was then Mark Goodson-Bill Todman Productions, as well as the second season of the syndicated series The $128,000 Question, which taped in Toronto. Since the second incarnation of High Rollers premiered while The $128,000 Question was still airing and taping episodes, Trebek became one of two hosts to emcee shows in both the United States and Canada, joining Jim Perry, who was hosting Definition and Headline Hunters in Canada and Card Sharks, which, coincidentally, premiered the same day as High Rollers in 1978, in the United States. Trebek's Francophone side was put on display in 1978, in a special bilingual edition of Reach for the Top and its Radio-Canada equivalent, Génies en herbe. In this show Trebek alternated smoothly between French and English throughout.[9]

Like other hosts of the day, Trebek made several guest appearances as panellist or player on other shows; one of his guest appearances was on a special week of NBC's Card Sharks, in 1980, where he and several other game show hosts (including Allen Ludden, Bill Cullen, Wink Martindale, Jack Clark, Gene Rayburn, and Jim Lange) competed in a week-long round robin tournament for charity. Trebek won the tournament, defeating Cullen in the finals. Trebek also appeared as a celebrity teammate on the NBC game show The Magnificent Marble Machine in 1975, as well as the Tom Kennedy-hosted NBC word game To Say the Least in 1978. Both of those shows were produced by Merrill Heatter-Bob Quigley Productions, which also produced High Rollers, the show Trebek was hosting during both of those guest appearances. Trebek also was a contestant on Celebrity Bowling in 1973, teamed with Jim McKrell; the duo won their match against Dick Gautier and Scatman Crothers.

After High Rollers was cancelled in 1980, Trebek moved on to Battlestars for NBC. The series debuted in October 1981, and was cancelled in April 1982 after only six months on the air. In September 1981 Trebek took the helm of the syndicated Pitfall, which taped in Vancouver and forced him to commute, as he had while hosting High Rollers and The $128,000 Question in 1978. Pitfall was cancelled after its production company, Catalena Productions, went bankrupt. As a result, he was never paid for that series. After both series ended, Trebek hosted a revival of Battlestars called The New Battlestars that ended after thirteen weeks, then shot a series of pilots for other series for producers Merrill Heatter (for whom he had worked hosting High Rollers and Battlestars) and Merv Griffin. The Heatter pilots were Malcolm, an NBC-ordered pilot featuring Trebek with an animated character as his co-host, and Lucky Numbers, an attempt at a revival of High Rollers that failed to sell. For Griffin, he shot two pilots for a revival of Jeopardy! This revival sold; he began hosting the revival in 1984 and has hosted ever since.

In 1987, while still hosting Jeopardy!, Trebek returned to daytime television as host of NBC's Classic Concentration, his second show for Mark Goodson. He hosted both shows simultaneously until September 20, 1991, when Classic Concentration aired its final episode. In 1991 Trebek made broadcast history by becoming the first person to host three American game shows at the same time, earning this distinction on February 4, 1991, when he took over for Lynn Swann as host of NBC's To Tell the Truth, also for Goodson-Todman, which he hosted until the end of the series' run on May 31, 1991.

In 1994, Trebek returned to the CBS network for the first time since hosting Double Dare to host the Pillsbury Bake-Off which he hosted until 1998.

In August 1995 in a return to his broadcast-news roots, Trebek filled in for Charles Gibson for a week on Good Morning America.

Trebek appeared on Celebrity Poker Showdown in 2005. He came in second place in his qualifying game, losing to Cheryl Hines. On May 9, 2008, Trebek was a guest on Jimmy Kimmel Live! On the program, he discussed his 24-year career as the host of Jeopardy! Another appearance on Jimmy Kimmel Live! was in 2011, when he talked about the IBM Challenge on Jeopardy!

Trebek also appears in many commercials for Colonial Penn Life Insurance, of which he is a "compensated endorser," and he reprised his role as host of To Tell the Truth in a 2010 advertisement for DirecTV. On December 18, 2014 series finale episode of The Colbert Report, Trebek (introduced as the "one with all the answers") greets Colbert as he boards a sleigh driven by Santa Claus and Abraham Lincoln and leaves the studio for the last time.[15]

Trebek became a naturalized citizen of the United States in 1998.[16] Trebek has been married to Jean Currivan Trebek, a real estate project manager from New York, since 1990.[17] They have two children, Matthew (who was born during a taping of To Tell The Truth in which Trebek had to miss two tapings and led to Mark Goodson subbing for Trebek) and Emily. His former wife is Elaine Callei.[18]

In 1996 Trebek ran the Olympic Torch in Jacksonville, Florida, through a leg of its journey to Atlanta.[19]

On January 30, 2004, Trebek escaped major injury after falling asleep behind the wheel of his pick-up truck while driving alone on a rural road in the Central Coast town of Templeton, California, returning from a family home in Lake Nacimiento. The truck sideswiped a string of mailboxes, flew 45 feet[24] over an embankment, and came to rest against a utility pole in a ditch. Trebek was not cited for the accident and returned to work taping Jeopardy! the following Tuesday.[25][26]

Trebek was robbed in a hotel room in San Francisco on July 27, 2011. While hosting the National Geographic World Championship he told a crowd at Google's HQ that he "snapped an Achilles tendon early Wednesday morning, while chasing a burglar at a San Francisco hotel." He woke up to sounds of a woman in his room going through his things. He said he then got out of bed, put on his underwear and chased the robber down the hall. During the chase, Trebek was injured, but he hobbled back to his room to call security, and the woman was apprehended. The woman arrested was Lucinda Moyers, who had been convicted of four previous burglaries since 1990.[31] Trebek says all was recovered except cash and a bracelet (a gift from his mother). He was expected to be in a cast for close to six weeks.[32] 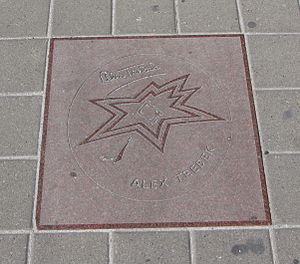 Trebek's star on the Canadian Walk of Fame

Trebek has been awarded five Outstanding Game Show Host Emmy Awards and a star on the Hollywood Walk of Fame (located at 6501 Hollywood Boulevard, near those for Ann-Margret and Vincent Price).

In March 2006, it was announced that he would receive a star on Canada's Walk of Fame.[35][36] He is the second game show host to be inducted (the first being Monty Hall of Let's Make a Deal and the third being Howie Mandel of Deal or No Deal). His star is located on King Street West near those of the Crazy Canucks and Eugene Levy.

In 2011, it was announced that Trebek would be one of the recipients of the Lifetime Achievement Award at the Daytime Emmy Awards.[37][38]

As of June 13, 2014, Trebek has held a Guinness World Record for "the most gameshow episodes hosted by the same presenter (same program)" for having hosted 6,829 episodes of Jeopardy!,[39] overtaking previous record holder Bob Barker.[citation needed]

He hosts the annual National Geographic Bee in the United States and The Great Canadian Geography Challenge in Canada. Active with the World Vision charitable organization, he has travelled to many third world countries with World Vision projects, taping reports on the group's efforts on behalf of children around the world.[40]

Trebek and the entire Jeopardy! crew became involved with the USO in 1995 and have appeared on several military bases throughout the world, both in an attempt to find contestants and as a morale booster for the troops.

In 1998 Trebek donated 74 acres of open land in north Hollywood (worth over 2 million dollars at the time) to the Santa Monica Mountains Conservancy.[41]

The American Foundation for the Blind in 2001 awarded Trebek with one of six Access Awards for his role in accommodating notable Jeopardy! champion Eddie Timanus.

On November 4, 2010, Trebek received the Royal Canadian Geographical Society's Gold Medal for his contribution to geographic education and the popular study of geography.[42] Previous recipients of this award include the author and anthropologist Wade Davis (2009), Peter Gzowski (1997), and Mary May Simon (1998), among others.[43]

On May 4, 2015, Trebek's alma mater, the University of Ottawa, named its alumni hall in his honour, as a benefactor to the university.[44]