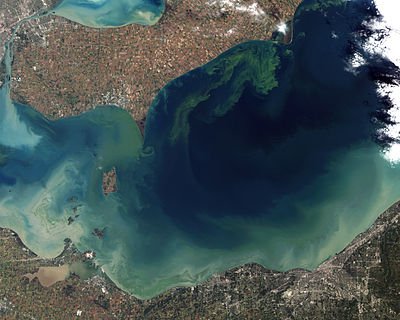 An algal bloom is a rapid increase or accumulation in the population of algae (typically microscopic) in a water system. Cyanobacteria blooms are often called blue-green algae. Algal blooms may occur in freshwater as well as marine environments. Typically, only one or a small number of phytoplankton species are involved, and some blooms may be recognized by discoloration of the water resulting from the high density of pigmented cells. 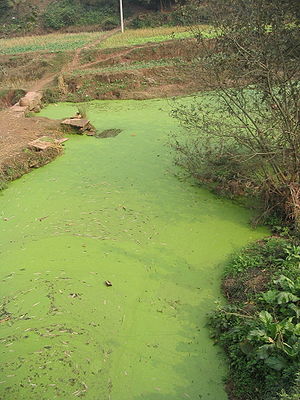 Algal blooms can present problems for ecosystems and human society.

Since 'algae' is a broad term including organisms of widely varying sizes, growth rates and nutrient requirements, there is no officially recognized threshold level as to what is defined as a bloom. For some species, algae can be considered to be blooming at concentrations reaching millions of cells per milliliter, while others form blooms of tens of thousands of cells per liter. The photosynthetic pigments in the algal cells determine the color of the algal bloom, and are thus often a greenish color, but they can also be a wide variety of other colors such as yellow, brown or red, depending on the species of algae and the type of pigments contained therein.

Bright green blooms in freshwater systems are frequently a result of cyanobacteria (colloquially known as blue-green algae) such as Microcystis. Blooms may also consist of macroalgal (non-phytoplanktonic) species. These blooms are recognizable by large blades of algae that may wash up onto the shoreline.

Of particular note are harmful algal blooms (HABs), which are algal bloom events involving toxic or otherwise harmful phytoplankton such as dinoflagellates of the genus Alexandrium and Karenia, or diatoms of the genus Pseudo-nitzschia. Such blooms often take on a red or brown hue and are known colloquially as red tides.

Freshwater algal blooms are the result of an excess of nutrients, particularly some phosphates.[2][3] The excess of nutrients may originate from fertilizers that are applied to land for agricultural or recreational purposes. They may also originate from household cleaning products containing phosphorus.[4] These nutrients can then enter watersheds through water runoff.[5] Excess carbon and nitrogen have also been suspected as causes. Presence of residual sodium carbonate acts as catalyst for the algae to bloom by providing dissolved carbon dioxide for enhanced photo synthesis in the presence of nutrients.

When phosphates are introduced into water systems, higher concentrations cause increased growth of algae and plants. Algae tend to grow very quickly under high nutrient availability, but each alga is short-lived, and the result is a high concentration of dead organic matter which starts to decay. The decay process consumes dissolved oxygen in the water, resulting in hypoxic conditions. Without sufficient dissolved oxygen in the water, animals and plants may die off in large numbers. Use of an Olszewski tube can help combat these problems with hypolimnetic withdrawal.

Blooms may be observed in freshwater aquariums when fish are overfed and excess nutrients are not absorbed by plants. These are generally harmful for fish, and the situation can be corrected by changing the water in the tank and then reducing the amount of food given. 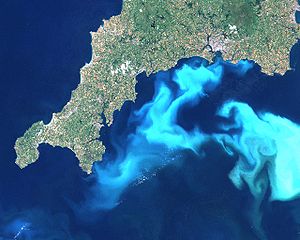 An algae bloom off the southern coast of Devon and Cornwall in England, in 1999 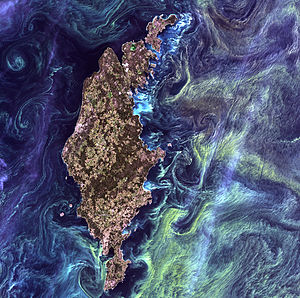 Satellite image of phytoplankton swirling around the Swedish island of Gotland in the Baltic Sea, in 2005

In the marine environment, single-celled, microscopic, plant-like organisms naturally occur in the well-lit surface layer of any body of water. These organisms, referred to as phytoplankton or microalgae, form the base of the food web upon which nearly all other marine organisms depend. Of the 5000+ species of marine phytoplankton that exist worldwide, about 2% are known to be harmful or toxic.[7] Blooms of harmful algae can have large and varied impacts on marine ecosystems, depending on the species involved, the environment where they are found, and the mechanism by which they exert negative effects.

Harmful algal blooms have been observed to cause adverse effects to a wide variety of aquatic organisms, most notably marine mammals, sea turtles, seabirds and finfish. The impacts of HAB toxins on these groups can include harmful changes to their developmental, immunological, neurological, or reproductive capacities. The most conspicuous effects of HABs on marine wildlife are large-scale mortality events associated with toxin-producing blooms. For example, a mass mortality event of 107 bottlenose dolphins occurred along the Florida panhandle in the spring of 2004 due to ingestion of contaminated menhaden with high levels of brevetoxin.[8] Manatee mortalities have also been attributed to brevetoxin but unlike dolphins, the main toxin vector was endemic seagrass species (Thalassia testudinum) in which high concentrations of brevetoxins were detected and subsequently found as a main component of the stomach contents of manatees.[8]

Additional marine mammal species, like the highly endangered North Atlantic Right Whale, have been exposed to neurotoxins by preying on highly contaminated zooplankton.[9] With the summertime habitat of this species overlapping with seasonal blooms of the toxic dinoflagellate Alexandrium fundyense, and subsequent copepod grazing, foraging right whales will ingest large concentrations of these contaminated copepods. Ingestion of such contaminated prey can affect respiratory capabilities, feeding behavior, and ultimately the reproductive condition of the population.[9]

Immune system responses have been affected by brevetoxin exposure in another critically endangered species, the Loggerhead sea turtle. Brevetoxin exposure, via inhalation of aerosolized toxins and ingestion of contaminated prey, can have clinical signs of increased lethargy and muscle weakness in loggerhead sea turtles causing these animals to wash ashore in a decreased metabolic state with increases of immune system responses upon blood analysis.[10] Examples of common harmful effects of HABs include:

Due to their negative economic and health impacts, HABs are often carefully monitored.[12][13]

HABs occur in many regions of the world, and in the United States are recurring phenomena in multiple geographical regions. The Gulf of Maine frequently experiences blooms of the dinoflagellate Alexandrium fundyense, an organism that produces saxitoxin, the neurotoxin responsible for paralytic shellfish poisoning. The well-known "Florida red tide" that occurs in the Gulf of Mexico is a HAB caused by Karenia brevis, another dinoflagellate which produces brevetoxin, the neurotoxin responsible for neurotoxic shellfish poisoning. California coastal waters also experience seasonal blooms of Pseudo-nitzschia, a diatom known to produce domoic acid, the neurotoxin responsible for amnesic shellfish poisoning. Off the west coast of South Africa, HABs caused by Alexandrium catanella occur every spring. These blooms of organisms cause severe disruptions in fisheries of these waters as the toxins in the phytoplankton cause filter-feeding shellfish in affected waters to become poisonous for human consumption.[14]

If the HAB event results in a high enough concentration of algae the water may become discoloured or murky, varying in colour from purple to almost pink, normally being red or green. Not all algal blooms are dense enough to cause water discolouration. 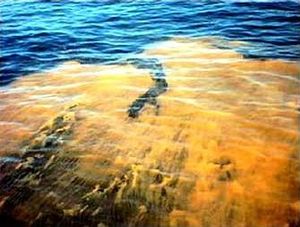 Red tide is a term often used synonymously with HABs in marine coastal areas, however the term is misleading since algal blooms can be a wide variety of colors and growth of algae is unrelated to the tides. The term 'algal bloom' or 'harmful algal bloom' has since replaced 'red tide' as the appropriate description of this phenomenon.

It is unclear what causes HABs; their occurrence in some locations appears to be entirely natural,[15] while in others they appear to be a result of human activities.[16] Furthermore, there are many different species of algae that can form HABs, each with different environmental requirements for optimal growth. The frequency and severity of HABs in some parts of the world have been linked to increased nutrient loading from human activities. In other areas, HABs are a predictable seasonal occurrence resulting from coastal upwelling, a natural result of the movement of certain ocean currents.[17] The growth of marine phytoplankton (both non-toxic and toxic) is generally limited by the availability of nitrates and phosphates, which can be abundant in coastal upwelling zones as well as in agricultural run-off. The type of nitrates and phosphates available in the system are also a factor, since phytoplankton can grow at different rates depending on the relative abundance of these substances (e.g. ammonia, urea, nitrate ion). A variety of other nutrient sources can also play an important role in affecting algal bloom formation, including iron, silica or carbon. Coastal water pollution produced by humans (including iron fertilization) and systematic increase in sea water temperature have also been suggested as possible contributing factors in HABs.[18] Other factors such as iron-rich dust influx from large desert areas such as the Sahara are thought to play a role in causing HABs.[19] Some algal blooms on the Pacific coast have also been linked to natural occurrences of large-scale climatic oscillations such as El Niño events. While HABs in the Gulf of Mexico have been occurring since the time of early explorers such as Cabeza de Vaca,[20] it is unclear what initiates these blooms and how large a role anthropogenic and natural factors play in their development. It is also unclear whether the apparent increase in frequency and severity of HABs in various parts of the world is in fact a real increase or is due to increased observation effort and advances in species identification technology.[21][22] However recent research found that the warming of summer surface temperatures of lakes, which rose by 0.34°C decade per decade between 1985 and 2009 due to global warming, also will likely increase algal blooming by 20 % over the next century.[23]

Since many Algal blooms are caused by a major influx of nutrient-rich runoff into a water body, programs to treat wastewater, reduce the overuse of fertilizers in agriculture and reducing the bulk flow of runoff can be effective for reducing severe algal blooms at river mouths, estuaries, and the ocean directly in front of the river's mouth.