Graduated in cinema from Faculty of Dramatic Arts, his debut was 'Hasan Kachal' (Hasan the Bald), the first Iranian musical film. Since then, he paid attention to unusual rhythmic dialogs and also the use of traditional settings and architecture in his films that became the characteristics of his works.

Although his works did not attract international attention, the Iranian audience praised him. His mind was occupied with making films on the basis of historical and folkloric figures. He was usually the art director of his own films. His last film remained incomplete because of his death due to cancer, on December 7, 1996 in Tehran.

Hatami made three great historical TV series, all of them are considered as eternal works in the history of Iranian TV. Meanwhile, he established a small production village as the historical site in which he made Hezar Dastan. It has been since used as the shooting location for many films and TV series, including Agency (1997), The Red Ribbon (1998), The Dead Wave (2000), The Low Heights (2001) and many others.

He was married to famous Iranian actress Zari Khoshkam. Their daughter Leila Hatami is a famous actress in Iran. 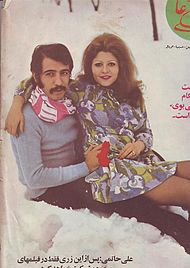