Alibi is a digital television channel broadcasting in the United Kingdom and Ireland, as part of the UKTV network of channels. The channel launched on 1 November 1997 and relaunched in its current format on 7 October 2008. The channel is available on satellite through Sky, on cable, primarily through Virgin Media and on IPTV through BT TV and TalkTalk TV.[1] 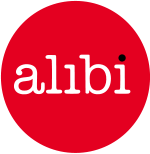 The channel originally launched as part of the new four channel UKTV network on 1 November 1997. The channel, originally named UK Arena, focused on arts programming and was named after the BBC's flagship arts programme Arena (The BBC, through BBC Worldwide, owning half of UKTV and therefore half the channel). However, following disappointing original ratings, the channel's focus was broadened to include all drama series, and was renamed UK Drama as a result on 31 March 2000. The service lasted, with greater viewing figures until 8 March 2004 when, along with the rest of the UKTV network, rebranded as UKTV Drama to better show the central UKTV brand.

Following the successful relaunch and rebranding of the channel UKTV G2 as Dave, the remainder of the UKTV network underwent the same treatment. UKTV Drama was rebranded as Alibi on 7 October 2008, and the channels programming output was redirected from all dramas, to specifically crime dramas.[2][3] All non-crime dramas were either transferred to the rebranded Gold channel, or to the newly created flagship channel Watch.

The time shift service Alibi +1 was originally launched on 2 May 2006 as UKTV Drama +1, using the frequency previously occupied by UKTV People +1. It features the channels schedule broadcast an hour later, with no special idents or continuity used.

On 29 July 2011, UKTV announced that it had secured a deal with BSkyB to launch three more high-definition channels on Sky.[4] As part of Virgin Media's deal to sell its share of UKTV, all five of UKTV's HD channels would also be added to Virgin's cable television service by 2012.[5] Alibi HD launched on 3 July 2012 on Sky and Virgin Media, while Dave HD and Watch HD launched in October 2011. All three channels are HD simulcasts of the standard-definition channels.

When the channel launched in 1997, the idents featured a star shape, usually inside a circle, with the UK Arena logo below. The logo, like that of all the UKTV channels until 2001, featured a single straight line logo with the UK prefix in a white box and the channel name typed in Gill Sans above a line extending out from the box. When the channel changed to UK Drama in 2000, the idents remained the same, with a change of logo the only noticeable difference.

A new design in 2002 resulted in the UK Drama logo standing alone at the bottom of the screen in a bold text, stylised to appear as: "UK Drama". On the end of the logo, a small design was included. One was assigned to each channel, with the exception of UK Gold and UK Gold 2, to identify what the channel broadcast. In the case of UK Drama, it was a bold, eight pointed star within a circle. The idents themselves were replaced by three men beating drums with water on the surface with each drummer bathed in a particular colour light: red, blue and green. A subsequent name change to UKTV Drama saw the logo with an uppercase 'DRAMA' below a UKTV logo which was aligned to the left of the screen, a predominantly purple colour scheme, and idents that featured a giant glass appearing 'D'.

Following the rebrand to Alibi in October 2008, the channel's idents were all accompanied by the alibi logo, seen with interchangeable colours of white, black and red, and featured words associated with crime and murder arranged into different shapes; the outline of a dead body, a gunshot shattering a pane of glass, the dials of a safe, and the beam from a torch illuminating the words.

On 1 July 2015, Alibi had its first rebrand for seven years, with a slight change to the overall look and feel. The channel's red identity was made slightly darker while the logo stayed circular with white font, no dot over the first "i" and a black dot over the second. New idents feature crime scenes with the camera following red string that joins the clues together before resolving into the new logo.

The output of the channel is mainly drama series and serials from the BBC archive but also has ITV series and some exclusive shows from US and Canadian networks.