From Infogalactic: the planetary knowledge core
(Redirected from Alicante (province))
Jump to: navigation, search
For other uses, see Alicante (disambiguation).

Alicante (Spanish: [aliˈkante]), or Alacant (Valencian: [alaˈkant]), is a province of eastern Spain, in the southern part of the Valencian Community. It is bordered by the provinces of Murcia on the southwest, Albacete on the west, Valencia on the north, and the Mediterranean Sea on the east. The province is named after its capital, the city of Alicante. 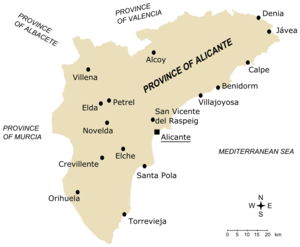 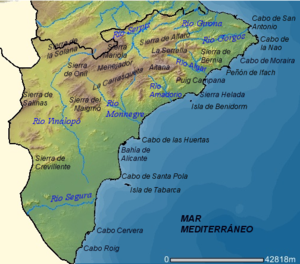 The coast extends from the cape, Cap de la Nau, in the north to almost reaching the Mar Menor (Minor Sea) in the south. With regard to water sources, due to the dry rain regime there are no major rivers, but mostly ramblas (dry rivers which fill in with water when torrential rains occur).

The only remarkable streams are the Vinalopó, Serpis, and, especially, the river Segura. Other minor seasonal creeks (some completely dried out in summer) are Girona, Algar, Amadòrio and Ebo.

There are remarkable saline wetlands and marshlands along the coast such El Fondo and the former wetlands and now salt evaporation ponds in Santa Pola and Torrevieja. All of them are key Ramsar Sites which make the Alicante province of high relevance for both migratory and resident seabirds and waterbirds.

Important coastal dunes are present in the Guardamar area which were planted with thousands of pine trees during the 19th century in order to protect the ville from the dunes advancing, which has created now an area of remarkable ecologic value.

The climate is strikingly diverse for such a reduced area. Three major areas can be cited

The predominant vegetation in this part of the province is Matorral Scrublands including thyme, esparto, juniper and the like.

The vegetation of this part is an enriched version of the Matorral shrubland and also Mediterranean pine woods.

The Iberians were the oldest documented people living in what today is the Alicante province. Belonging to these there are several archaeologic sites from which is specially known the one in La Serreta (near Alcoy) because the longest inscriptions remaining in the undeciphered Iberian language were found there.

Along the coast and contemporarily to the Iberians, the seafaring Phoenicians (in Guardamar) and Greeks (along the coastal section to the north of the Alicante city) settled stable trading colonies and interacted with the former (see Lady of Elche for the most renowned archeological piece of this period).

After a brief Carthaginian period, the Romans took over. Romanization in this part of Iberia was intense, the Via Augusta communicated this part of the Empire to the metropoli and so several cities thrived, from which the one known as Ilici Augusta (now Elche) even reached the status of colonia.

After a brief period of Visigothic ruling, the area was taken by Islamic armies and became a part of Al Andalus. From the 13th century, kings like Ferdinand III of Castile, James I of Aragon, Alfonso X of Castile, James II of Aragon reconquered the cities that Moors occupied. What today is the Alicante province was initially split between the Crown of Castile and the Crown of Aragon by means of the Treaty of Almizra, however later on the whole territory became under the control of the Kingdom of Valencia, which was a component Kingdom of the Crown of Aragon.

The main industries in Alicante province are, in the primary sector, intensive agriculture, specially in the fertile Vega Baja del Segura, Camp d'Elx (Elche's countryside) and vineyards in the inner part of the province (Monforte, Novelda, Pinós), also near the coast in the Marina Alta area. Fishing is important all along the coast, with important fishing harbours such as Santa Pola, Calp or Dénia.

Industry has been historically important in the textile sector around Alcoy. Footwear still remains as the flagship industrial sector of the province, which occurs in Elche, Elda, Petrer and Villena, both labour-intensive footwear and, specially, textile are at a low ebb due to harsh competition from fast pace growing economies in Asia. The traditionally important toys industry around the Ibi and Onil area is another one competing internationally with those same areas.

A sector which has gained preeminence during the last 20 years is marble quarrying and processing, it happens mostly in the Novelda and Pinós area.

Still, what the province is known for is its massive tourism sector. The Costa Blanca's generally mild and sunny weather attracts hundreds of thousands of tourists from other European countries such as the Netherlands, the UK and Ireland, Germany, Belgium, Norway or France and also from other parts in Spain like Madrid. Thousands of families from other places own a second home in the Alicante province which they use for their vacation time. 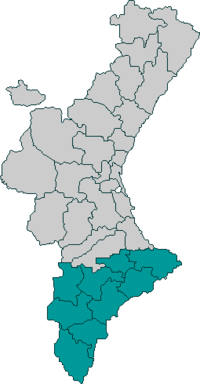 Alicante province in the Community of Valencia. Map subdivided according to the historical divisions.

Traditionally, Alicante province is divided into nine comarcas or comarques (in Valencian):