The All-Union Communist Party Bolsheviks (Всесоюзная Коммунистическая партия большевиков, ВКПБ, Vsesoyuznaya Kommunisticheskaya Partiya bol'shevikov, VKPb) is a Marxist-Leninist and anti-revisionist political party operating in Russia and other former Soviet states. It was founded in November 1991, and led by Nina Andreyeva, a university teacher who was well known for her 1988 letter 'I cannot give up my principles'. The AUCPB has its origins in the 'Bolshevik Platform' of the Communist Party of the Soviet Union. The party opposes the Communist Party of the Russian Federation due to its 'reformist' character and has refused to back its candidates for presidential election. 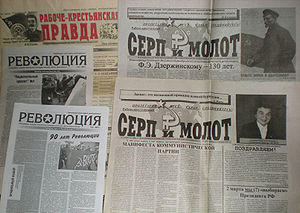