Allah Bux Muhammad Umar Soomro (1900 – May 14, 1943) (Sindhi: اللهَ بخشُ سوُمَرو ‎), (Khan Bahadur Sir Allah Bux Muhammad Umar Soomro OBE till September 1942) or Allah Baksh Soomro, was a zamindar, government contractor, Indian independence activist and politician from the province of Sindh in British India. He is considered to be amongst the best premiers of the province. He was referred to as Shaheed or "martyr".

Allah Bux Soomro was born in 1900 in Shikarpur in the Bombay Presidency in an affluent family. He founded the Sind Ittehad Party and served as the Chief Minister of Sindh from March 23, 1938 to April 18, 1940 and March 7, 1941 to October 14, 1942. He was assassinated, allegedly by religious extremists, in 1943. His son Rahim Bux Soomro was also a politician in Pakistan. His nephew, Elahi Bux Soomro was the speaker of the National Assembly of Pakistan and is a Veteran Politician

Allah Bux Soomro was born in the family fief of Shikarpur in northern Sindh in 1900. His father was the hereditary chief of the Soomro Rajputs. He completed his matriculation examinations in 1918 and joined his father's contract business.[1] He joined politics at an early age and was elected to the Jacobabad municipality.[1]

Soon after taking over as Chief Minister of Sindh, Soomro overruled the banishment of Ubaidullah Sindhi, thereby allowing him to return to his homeland.[2] He reduced the salary of ministers to Rs.500 per month and prohibited the practice of nominating members to local bodies.[2]

Soomro also introduced reforms in religion. In 1938, he prohibited Ziwal-Haj.[2] He also banned the Om Mandali, predecessor of the Brahma Kumari organisation.[2]

In 1934, a Muslim Pir of Lawari had organised a local Haj for those who could not afford to visit Saudi Arabia. The pilgrims gathered on Ziwal-Haj, read namaz while turning to the dargah, went to a local well renamed Zam Zam, addressed the Pir as Khuda and greeted each other as Hajji. It gave these poor Muslims great spiritual satisfaction. The Muslims denounced it as un-Islamic, agitated violently, and forced Allah Bux Soomro to ban it in 1938.[3] This group had similar beliefs as Zikri sect of Balochistan. 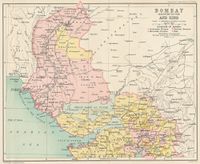 Manzilgah was the name of a couple of old buildings near the Sadh Belo temple in Sukkur which were used as a government godown. It was variously claimed to be a mosque and an inn.[2] The Hindus opposed Muslim claims that the building was a mosque as the presence of a mosque so close to a Hindu temple would trigger communal tensions in the area.[2] The Ghulam Hussain Government responded by rebuffing the extremist elements by claiming that the buildings were government property.[2] When Allah Bux became Premier, he sent a commission which reported that Manzilgah was an inn.[2] Unconvinced, in June 1939, the Muslim League launched an agitation.[4] Senior League leaders G. M. Syed, M. A. Khuhro and Sir Abdullah Haroon forcibly occupied Manzilgah from October 3, 1939 to November 19, 1939.[2] The government, initially, tried to quell the movement through use of force.[4] However, when the tactic proved unsuccessful, the government yielded and allowed Muslims to pray in Manzilgah.[4]

At about the same time, the Sufi poet, Bhagat Kanwar Ram was assassinated.[2] Communal riots broke out in Sukkur and there was a total strike which lasted 15 days.[2] In November 1939, the Sind Hindu Provincial Conference, presided over by Dr. Moonje of the Hindu Mahasabha threatened Muslims with retaliation if the mosque was not recovered by the government.[4] While some sources claim that 17 Muslims and 40 Hindus were killed in the riots[5] another claims that the toll of Hindus killed was over 60.[2]

A compromise was reached in February 1941, when Manzilgah was handed over to Muslims but not before the Muslims had agreed not to obstruct the playing of music in the nearby Saadha Belo temple.

In 1940, a no-confidence motion was passed against Allah Bux Soomro.[2] The Indian National Congress joined hands with the Muslim League and voted against him.[2] Following the dismissal of his government, Soomro appointed member of the National Defence Council in which he served till 1942, when the Quit India Movement was started.[6] In September 1942, Soomro renounced his knighthood and the Khan Bahadur title which the British government had bestowed upon him.[2][7] He also resigned from the National Defence Council.[2]

Allah Bux Soomro was briefly elected back to power in March 1941 and served as Premier for about a year.[2] However, he was dismissed by the Governor due to his support for the Quit India Movement.[2]

Allah Bux Soomro was assassinated on May 14, 1943 while he was travelling in a Tanga in his hometown of Shikarpur.[2][8] He was 43 years old at the time of his death.