From Infogalactic: the planetary knowledge core
Jump to: navigation, search
Not to be confused with illusion.

Allusion is a figure of speech, in which one refers covertly or indirectly to an object or circumstance from an external context.[1] It is left to the audience to make the connection;[2] where the connection is directly and explicitly stated (as opposed to indirectly implied) by the author, an allusion is instead usually termed a reference.[3][4][5] In the arts, a literary allusion puts the alluded text in a new context under which it assumes new meanings and denotations.[6] It is not possible to predetermine the nature of all the new meanings and inter-textual patterns that an allusion will generate.[6] Literary allusion is closely related to parody and pastiche, which are also "text-linking" literary devices.[6]

In a wider, more informal context, an allusion is a passing or casually short statement indicating broader meaning. It is an incidental mention of something, either directly or by implication: In the stock market he met his Waterloo.

Scope of the term 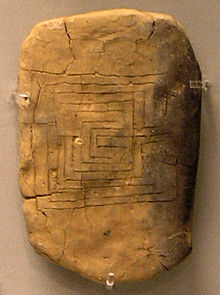 Backside of a clay tablet from Pylos bearing the motif of the Labyrinth, an allusion to the mythological fight of Theseus and the Minotaur

In the most traditional sense, allusion is a literary term, though the word has also come to encompass indirect references to any source, including allusions in film or the visual arts.[7] In literature, allusions are used to link concepts that the reader already has knowledge of, with concepts discussed in the story. In the field of film criticism, a film-maker's intentionally unspoken visual reference to another film is also called an homage. It may even be sensed that real events have allusive overtones, when a previous event is inescapably recalled by a current one. "Allusion is bound up with a vital and perennial topic in literary theory, the place of authorial intention in interpretation", William Irwin observed, in asking "What is an allusion?"[8]

Without the hearer or reader's comprehending the author's intention, an allusion becomes merely a decorative device. Allusion is an economical device, a figure of speech that uses a relatively short space to draw upon the ready stock of ideas, cultural memes or emotion already associated with a topic. Thus, an allusion is understandable only to those with prior knowledge of the covert reference in question, a mark of their cultural literacy.[7]

The origin of allusion is in the Latin verb ludere, lusus est "to play with, jest."[citation needed] Recognizing the point of allusion's condensed riddle also reinforces cultural solidarity between the maker of the allusion and the hearer: their shared familiarity with allusion bonds them. Ted Cohen finds such a "cultivation of intimacy" to be an essential element of many jokes[9] Some aspect of the referent must be invoked and identified in order for the tacit association to be made; the allusion is indirect in part because "it depends on something more than mere substitution of a referent."[10]

The allusion depends as well on the author's intent; a reader may search out parallels to a figure of speech or a passage, of which the author was unaware, and offer them as unconscious allusions—coincidences that a critic might not find illuminating.[dubious – discuss] Addressing such issues is an aspect of hermeneutics.

William Irwin remarks that allusion moves in only one direction: "If A alludes to B, then B does not allude to A. The Bible does not allude to Shakespeare, though Shakespeare may allude to the Bible." Irwin appends a note: "Only a divine author, outside of time, would seem capable of alluding to a later text."[11] This is the basis for Christian readings of Old Testament prophecy, which asserts that passages are to be read as allusions to future events due to Jesus's revelation in Luke 24:25-27.

Allusion differs from the similar term intertextuality in that it is an intentional effort on the author's part.[7] The success of an allusion depends in part on at least some of its audience "getting" it. Allusions may be made increasingly obscure, until at last they are understood by the author alone, who thereby retreats into a private language (e.g. "Ulalume", by Edgar Allan Poe).

Academic analysis of the concept of allusions

In discussing the richly allusive poetry of Virgil's Georgics, R. F. Thomas[12] distinguished six categories of allusive reference, which are applicable to a wider cultural sphere. These types are:

A type of literature has grown round explorations of the allusions in such works as Alexander Pope's The Rape of the Lock or T. S. Eliot's The Waste Land.

In Homer, brief allusions could be made to mythic themes of generations previous to the main narrative because they were already familiar to the epic's hearers: one example is the theme of the Calydonian boarhunt. In Hellenistic Alexandria, literary culture and a fixed literary canon known to readers and hearers made a densely allusive poetry effective; the poems of Callimachus offer the best-known examples.

Martin Luther King, Jr., alluded to the Gettysburg Address in starting his "I Have a Dream" speech by saying 'Five score years ago..."; his hearers were immediately reminded of Abraham Lincoln's "Four score and seven years ago", which opened the Gettysburg Address. King's allusion effectively called up parallels in two historic moments without overwhelming his speech with details.

A sobriquet is an allusion. By metonymy one aspect of a person or other referent is selected to identify it, and it is this shared aspect that makes a sobriquet evocative: for example, "the city that never sleeps" is a sobriquet of (and therefore an allusion to) New York.

An allusion may become trite and stale through unthinking overuse, devolving into a mere cliché, as is seen in some of the sections below.

Andy Warhol, a 20th-century American artist most famous for his pop-art images of Campbell soup cans and of Marilyn Monroe, commented on the explosion of media coverage by saying, "In the future, everyone will be world-famous for 15 minutes." Today, when someone receives a great deal of media attention for something fairly trivial, and he or she is said to be experiencing his or her "15 minutes of fame", the allusion is to Andy Warhol's famous remark.

According to the Book of Genesis, God destroyed the cities of Sodom and Gomorrah, but Lot, the nephew of Abraham, was given time to escape with his family before the destruction. God commanded Lot and his family not to look back as they fled. Lot's wife disobeyed and looked back, and she was immediately turned into a pillar of salt as punishment for her disobedience.

An allusion to Lot's wife or to a pillar of salt is usually a reference to someone who unwisely chooses to look back once he or she has begun on a course of action or to someone who disobeys an explicit rule or command.

In Greek mythology, Cassandra, the daughter of Trojan king Priam, was loved by Apollo, who gave her the gift of prophecy. When Cassandra later angered Apollo, he altered the gift so that her prophecies, while true, would not be believed. Thus, her accurate warnings to the Trojans were disregarded, and disaster befell them.

Today, a "Cassandra" refers to someone who predicts disasters or negative results, especially to someone whose predictions are disregarded.

This phrase comes from a novel by Joseph Heller. Catch-22 is set on a U.S. Army Air Force base in World War II. "Catch-22" refers to a regulation that states an airman's request to be relieved from flight duty can only be granted if he is judged to be insane. However, anyone who does not want to fly dangerous missions is obviously sane, thus, there is no way to avoid flying the missions.

Later in the book the old woman in Rome explains that Catch-22 means "They can do whatever they want to do." This refers to the theme of the novel in which the authority figures consistently abuse their powers, leaving the consequences to those under their command.

In common speech, "catch-22" has come to describe any absurd or no-win situation.

The poetry of T. S. Eliot is often described as "allusive", because of his habit of referring to names, places or images that may only make sense in the light of prior knowledge. This technique can add to the experience, but for the uninitiated can make Eliot's work seem dense and hard to decipher.

The most densely allusive work in modern English is Finnegans Wake by James Joyce. Joseph Campbell and Henry Morton Robinson wrote A Skeleton Key to Finnegans Wake (1944) that unlocked some of Joyce's most obscure allusions.