From Infogalactic: the planetary knowledge core
Jump to: navigation, search
For the clergyman who became Dean of Exeter, see Alured Clarke (priest). 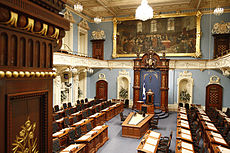 Field Marshal Sir Alured Clarke GCB (24 November 1744 – 16 September 1832) was a British army officer. He took charge of all British troops in Georgia in May 1780 and was then deployed to Philadelphia to supervise the evacuation of British prisoners of war at the closing stages of the American Revolutionary War. He went on to be Governor of Jamaica and then lieutenant-governor of Lower Canada in which role he had responsibility for implementing the Constitutional Act 1791. He was then sent to India where he became Commander-in-Chief of the Madras Army, then briefly Governor-General of India and finally Commander-in-Chief of India during the Fourth Anglo-Mysore War.

Promoted to lieutenant-colonel and given the command of the 7th Regiment of Foot, serving in America, on 13 May 1777,[3] Clarke took charge of all British troops in Georgia in May 1780 and, having been promoted to colonel on 16 May 1782, he was then deployed to Philadelphia to supervise the evacuation of British prisoners of war in May 1783.[1]

Clarke became Governor of Jamaica in Summer 1784.[2] Promoted to major-general on 1 May 1790,[4] he acquitted himself well enough as Governor of Jamaica that he was recommended to King George III as a suitable person to become lieutenant-governor of Lower Canada in October 1790.[5] In the absence of the Governor, who had departed for England in August 1791, he took command of British forces and set about implementing the Constitutional Act 1791 which involved settling geographical boundaries (between Lower Canada and the United States and between Lower Canada and the rest of Canada), offering land to settlers and convening the first legislature of the Province.[5] Clarke served as lieutenant-governor of Lower Canada until Summer 1793, when the Governor returned to Canada and Clarke could return to England.[2]

Clarke was sent to India in 1795 with instructions to interrupt his voyage at the Cape of Good Hope where he and his force defeated a Dutch army at Wynberg on 16 September 1795 and then spent the next two months on arranging administrative matters before proceeding to India.[6] On arrival in India in early 1796 he became Commander-in-Chief of the Madras Army. He was promoted to the local rank of lieutenant-general on 3 May 1796 and, having been appointed a Knight Companion of the Order of the Bath on 14 January 1797, he was promoted to the substantive rank of lieutenant-general on 4 February 1797.[7] He became acting Governor-General of India in March 1798 (in which capacity he also served as acting Commander-in-Chief of the Bengal Army) and then became Commander-in-Chief, India in May 1798.[2] Although Clarke was not present at the Siege of Seringapatam in April 1799, his army was victorious thereby successfully concluding the Fourth Anglo-Mysore War.[1] He returned to England in March 1801 and was promoted to full general on 11 May 1802.[8] Following a re-organisation of the order, he was advanced to Knight Grand Cross of the Order of the Bath on 4 January 1815.[9]

In retirement Clare lived at Mansfield Street in London.[14] He was promoted to field marshal on the occasion of the coronation of King William IV on 22 July 1830.[15] He died at Llangollen in Wales on 16 September 1832 while visiting his niece.[16]

Clarke married Elizabeth Catherine (Kitty) Hunter in 1770,[1] who eight years earlier had eloped with the married Earl of Pembroke.[1] Kitty had a son by Pembroke, and received a pension from him until 1790, but Clarke and Kitty had no children.[1]