Amarillo College (AC) is a two-year community college in Amarillo, Texas with over 10,000 students that was established in 1929 as Amarillo Junior College. Amarillo College has a total of six campuses as of October 2005.

Prior to 1929, Amarillo was the largest Texas city without a public college. George Ordway and James Guleke helped to introduce a house bill that would establish junior college districts in the Amarillo area. On July 16, 1929, AC became the first Texas junior college district to be organized independent of a school district. The first classes were held later that year in September. The college moved to its main campus on Washington Street in 1937.

In 1951, AC became one of the first three publicly supported Texas college to admit blacks to undergraduate classes. The others were Texas Southmost College in Brownsville and Howard County Junior College in Big Spring. (The AC Story: Journal of a College, Joe F. Taylor, 1979)

Amarillo College was the host of a men's basketball team from the1960s through several years in the 1970s. In 1970 the team was ranked 9th in the nation in pre-season rankings and spent a good part of the season in the top ten among junior colleges in the nation. The conference included New Mexico JC, Odessa College, Frank Phillips College, New Mexico Military Institute, Howard County College, South Plains College and Clarendon College.

Amarillo also had a men's and women's tennis team as well as a men's golf team in the 1960s and 1970s. In 1971 the AC golf team finished sixth in conference action. 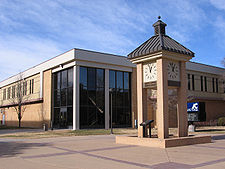 The clock tower at the Amarillo College's Washington Street campus.

The college's main and original campus is located near downtown Amarillo. As of 2005, the campus expands to nearly 31 acres (130,000 m2) with 17 buildings. It has its own radio and television studios which is home to the Texas Panhandle region's PBS member station, KACV-TV. The Amarillo Art Center is also located in this campus, opened in 1972, is a building complex with an art museum and concert hall.

The campus is located in downtown Amarillo. In 1977, Amarillo College leased two gyms from the Amarillo Senior Citizens Association (ASCA), formerly of Amarillo High School and Elizabeth Nixson Junior High School. In 1996, the old Amarillo High School gymnasium was transformed into Business & Industry Center which houses an auditorium, an exhibit hall and classrooms for seminars, short courses, and computer training. The facility is used to workforce training for business and industry. 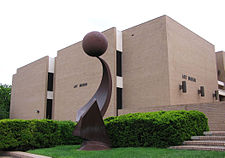 The Amarillo Museum of Art at the Washington Street Campus.

The campus is sparsely developed, consisting of old buildings from the TSTC days (which itself were donated when Amarillo Air Force Base closed) and a residential community called Highland Park Village (consisting of old military housing duplexes, from which the nearby school district takes its name), currently managed by the college.

In 2000 Amarillo College started operating a campus outside Amarillo in Dumas, Texas. The college opened a sixth campus in Hereford, the seat of Deaf Smith County, on August 29, 2005. KPAN AM&FM radio broadcaster Clint Formby raised $89,000 in scholarships for student attending the Hereford campus.[2]