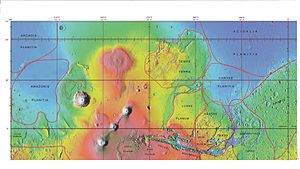 Amazonis Planitia is one of the smoothest plains on Mars. It is located between the Tharsis and Elysium volcanic provinces, to the west of Olympus Mons, in the Amazonis and Memnonia quadrangles, centered at Lua error in Module:Coordinates at line 668: callParserFunction: function "#coordinates" was not found.. The plain's topography exhibits extremely smooth features at several different lengths of scale.[1] A large part of the Medusae Fossae Formation lies in Amazonis Planitia.

Its name derives from one of the classical albedo features observed by early astronomers, which was in turn named after the Amazons, a mythical race of warrior women.

Only approximately 100 million years old, these plains provide some of the fewest sedimentary layers impeding viewing of the Martian terrain, and closely resemble the composition of Earth's Iceland. Formed by free-flowing lava across great plains, Amazonis has been described by William Hartmann as a "bright dusty volcanic desert crossed by many fresh-looking lava flows."[2]

Amazonis has become the primary focus of modern research efforts both because of its geological composition and because of its relative youth compared to other Martian regions, which are often hundreds of millions of years older. [3] Hartman writes that the plain closely resembles Iceland's surface, with its "strange cobweb-like networks of ridges and crags [on both planets, divide] smoother areas into a pattern something like fragments of a broken plate." Both land masses' shapes have been formed by lava flows from volcanic eruptions, causing both surfaces to be covered by a thick layer of hardened lava. Findings from aerial footage of both Amazonis and Iceland have shown nearly identical terrain patterns, signifying the comparative ages of the two regions.[4]

Ironically, the entire contemporary era on Mars has been named the Amazonian Epoch because researchers originally (and incorrectly) thought Amazonis Planitia to be representative of all Martian plains. Instead, over the past two decades, researchers have realized that the area's youth and extremely smooth surface actually distinguish the area from its neighbors. It is even possible that the area possessed distinctive characteristics when all of Mars was under water. [5]

Although the full implications of Amazonis's youth have not yet been determined, the nature of the area (i.e. lack of sedimentary rock) has at least provided researchers evidence that the areas are the most likely to provide future discoveries, and as such, has been proposed as a future site for most NASA landings. [6]

The Medusae Fossae Formation is a soft, easily eroded deposit that extends for nearly 1,000 km along the equator of Mars. The surface of the formation has been eroded by the wind into a series of linear ridges called yardangs. These ridges generally point in direction of the prevailing winds that carved them and demonstrate the erosive power of Martian winds. The easily eroded nature of the Medusae Fossae Formation suggests that it is composed of weakly cemented particles,[7]