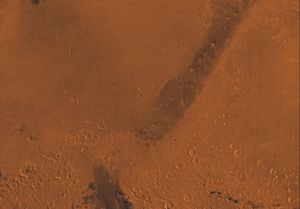 This quadrangle contains the Isidis basin, a location where magnesium carbonate was found by MRO. This mineral indicates that water was present and that it was not acidic. There are Dark slope streaks, troughs (fossae), and river valleys (Vallis) in this quadrangle.

The Beagle 2 lander was about to land in the quadrangle, particularly in the eastern part of Isidis Planitia, in December 2003, when contact with the craft was lost. In January 2015, NASA reported the Beagle 2 had been found on the surface in Isidis Planitia (location is about Lua error in Module:Coordinates at line 668: callParserFunction: function "#coordinates" was not found.).[2][3] High-resolution images captured by the Mars Reconnaissance Orbiter identified the lost probe, which appears to be intact.[4][5][6] (see discovery images here)

Some craters in the Amenthes region (as well as other parts of Mars) show ejecta around them that have lobes. It is believed that the lobed shape is caused by an impact into water or ice logged ground. Calculations suggest that ice is stable beneath the Martian surface.

At the equator the stable layer of ice might lie under as much as 1 kilometer of material, but at higher latitudes the ice may be just a few centimeters below the surface. This was proven when the landing rockets on the Phoenix lander blew away surface dust to reveal an ice surface.[7][8] The larger an impact crater, the deeper its penetration, a large crater is more likely to have a lobate ejecta since it went down to the ice layer. When even small craters have lobes, the ice level is close to the surface.[9] This idea would be very important for future colonists on Mars who would like to live near a source of water.

Impact craters generally have a rim with ejecta around them, in contrast volcanic craters usually do not have a rim or ejecta deposits.[10] Sometimes craters will display layers. Since the collision that produces a crater is like a powerful explosion, rocks from deep underground are tossed unto the surface. Hence, craters can show us what lies deep under the surface.

The density of impact craters is used to determine the surface ages of Mars and other solar system bodies.[11] The older the surface, the more craters present. Crater shapes can reveal the presence of ground ice.

The area around craters may be rich in minerals. On Mars, heat from the impact melts ice in the ground. Water from the melting ice dissolves minerals, and then deposits them in cracks or faults that were produced with the impact. This process, called hydrothermal alteration, is a major way in which ore deposits are produced. The area around Martian craters may be rich in useful ores for the future colonization of Mars.[12] Studies on the earth have documented that cracks are produced and that secondary minerals veins are deposited in the cracks.[13][14][15] Images from satellites orbiting Mars have detected cracks near impact craters.[16] Great amounts of heat are produced during impacts. The area around a large impact may take hundreds of thousands of years to cool.[17][18][19] Many craters once contained lakes.[20][21][22] Because some crater floors show deltas, we know that water had to be present for some time. Dozens of deltas have been spotted on Mars.[23] Deltas form when sediment is washed in from a stream entering a quiet body of water. It takes a bit of time to form a delta, so the presence of a delta is exciting; it means water was there for a time, maybe for many years. Primitive organisms may have developed in such lakes; hence, some craters may be prime targets for the search for evidence of life on the Red Planet.[24]

Hebrus Vales has tributaries, terraces, and teardrop shaped islands. The tear drop shape of the islands indicate what direction the water used to flow. The terraces may be caused by different layers of rocks or from the water being at different levels.[25] These features are common for the rivers of the Earth.