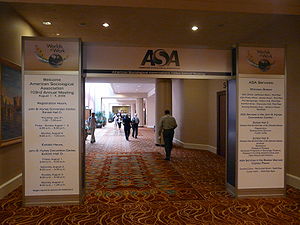 The ASA holds its own annual academic conference, the American Sociological Association Annual Meeting. The 103rd ASA Annual Meeting in Boston in August 2008 attracted 5,458 attendees.[1] ASA publishes several academic journals. The best known is the American Sociological Review and the newest one is Contexts, a magazine designed to share sociology with other fields and the public. In 2010, ASA's membership went beyond 14,000 and consists of various sociology-related professionals: academics (professors, students, researchers) as well as other practitioners. ASA currently is the largest professional association of sociologists in the world, even larger than the International Sociological Association.[citation needed]

The mission of the ASA is to advance sociology as a scientific discipline and as a profession serving the public good.[2]

The American Sociological Association was founded in December 1905 at Johns Hopkins University by a group of fifty people. The first president of the association was Lester Frank Ward.[3]

The American Sociological Association is governed by a code of ethics and ethical standards. In 1970, the first ASA code of ethics was written. Since 1970, the code of ethics has been revised. The Committee on Professional Ethics worked to write this code and upon completing and approving it in 1997, the code focused on three goals. These three goals were to make the code more educative, accessible, easier to use, and more helpful for sociologists to understand ethical issues.[4]

In 1993, then-doctoral student Rik Scarce was jailed for more than five months as a result of following the ASA's code of ethics. Scarce's Ph.D. research was on the radical environmental movement. Based on an FBI investigation of an Animal Liberation Front break-in, federal prosecutors argued in court that Scarce may have engaged in conversations with individuals believed to be involved with the incident. Prosecutors demanded that Scarce testify to a federal grand jury about those conversations, but Scarce refused to answer three dozen questions, citing the ASA Code of Ethics and the First Amendment as his reasoning for remaining unresponsive.[5] Scarce's refusal to answer resulted in a contempt of court citation and 159 days spent in jail. He was never suspected of wrongdoing and—in keeping with contempt of court practice—he was never read his Miranda rights, arrested, or tried.[6]

In early 2010, ASA publicly expressed outrage over a controversy involving Frances Fox Piven and Glenn Beck, asking Fox News to stop Beck's comments.[7] An article written by Piven concerning mobilization of unemployed individuals had spurred the commentary by Beck.[8] ASA suggests in their public statements that the line should be drawn at name calling and that political commentators should instead rely on gathering evidence related to the topics and then drawing the proper conclusions.

In January 2012, a United States district court ordered Boston College to turn over material from the "Belfast Project", an oral history project pertaining to the violence in Northern Ireland. Boston College filed an appeal in February 2012, challenging the district court's decision. ASA became involved in the case to help protect human participants from the subpoena of confidential project research data.[9] The statement by the ASA council cited the potential damage this ruling would have on social science research by stifling the ability to study controversial topics. ASA is looking for an affirmation by the court for confidentiality in research.[citation needed]

ASA style is a widely accepted format for writing university research papers that specifies the arrangement and punctuation of footnotes and bibliographies. Standards for ASA style are specified in the ASA Style Guide, which is designed to aid authors in preparing manuscripts for ASA journals and publications.

Officers of the association are:[11]

The following persons have been president of the American Sociological Association:[12]

There are five different types of membership categories:[13]

ASA Members may also join special interest sections at an additional cost to their membership.[14]

The Annual Meeting of the ASA is held each August to provide opportunity for professionals involved in the study of society to share knowledge and new directions in research and practice. It provides networking outlets for nearly 3,000 research papers and 4,600 presenters.[16] The meeting is spread across four days and covers 600 program sessions.

All ASA Committees and Task Forces also meet during the annual meeting. The ASA Council and several Constitutional Committees meet mid-year during the winter months in Washington D.C.[17]

Regional Associations associated with the ASA are:[18]

Every year, in August, the ASA presents awards to individuals and groups deserving of recognition. The awards presented are:[19]

Additionally, the Sections of the ASA administer separate multiple awards, which are presented each August during the Annual Meeting.[20]

In the fall of 2011, the ASA launched its "Sociology in Wikipedia" initiative. President Erik Olin Wright of the American Sociological Association called for improvement in sociological entries in Wikipedia. He asked that professors and students to get more involved by having Wikipedia-writing assignments in class. The basic goal set forth by the initiative is to make it easier for sociologists to contribute to Wikipedia. In conjunction with the Wikimedia Foundation and a research group at Carnegie Mellon University, the ASA developed its Wikipedia Portal in an attempt to achieve the initiative’s goal by providing tutorials on how to contribute, video discussions of norms and procedures, and lists of articles and subject areas that need improvement. The Wikipedia Portal also provides instructions for professors on how to use Wikipedia writing assignments for academic courses. The overall goal of the initiative is for sociologists to become involved in the writing and editing processes to ensure that social science articles are up-to-date, complete, accurate, and written appropriately.[21]