Amy Goodman (born April 13, 1957) is an American broadcast journalist, syndicated columnist, investigative reporter, and author. Goodman's investigative journalism career includes coverage of the East Timor independence movement and Chevron Corporation's role in Nigeria. Since 1996, Goodman has hosted Democracy Now!, an independent global news program broadcast daily on radio, television and the Internet. She is the recipient of numerous awards, including the Thomas Merton Award in 2004, a Right Livelihood Award in 2008, and an Izzy Award in 2009 for "special achievement in independent media". In 2012, Goodman received the Gandhi Peace Award for a "significant contribution to the promotion of an enduring international peace". Goodman is the author of six books, including the 2012 The Silenced Majority: Stories of Uprisings, Occupations, Resistance, and Hope,[2] and the 2016 Democracy Now!: Twenty Years Covering the Movements Changing America.[3]

Amy Goodman was born on April 13, 1957, in Washington, D.C.[4] Her father, George Goodman, was an ophthalmologist, and her mother, Dorothy, a literature teacher, then social worker.[5] Goodman is from an Orthodox Jewish family; her maternal grandfather was an Orthodox Rabbi.[6][7] Raised in Bay Shore, New York, she graduated from Bay Shore High School in 1975, and from Radcliffe College in 1984, with a degree in anthropology.[8] Goodman spent a year studying at the College of the Atlantic in Bar Harbor, Maine.[9][not in citation given] 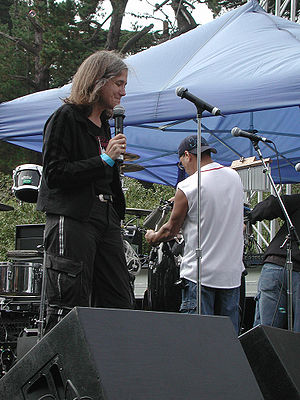 Goodman speaking at Power to the Peaceful Festival, San Francisco 2004.

In 1991, covering the East Timor independence movement, Goodman and fellow journalist Allan Nairn reported that they were badly beaten by Indonesian soldiers after witnessing a mass killing of Timorese demonstrators in what became known as the Santa Cruz Massacre.[10]

In 1998, Goodman and journalist Jeremy Scahill documented Chevron Corporation's role in a confrontation between the Nigerian Army and villagers who had seized oil rigs and other equipment belonging to oil corporations. Two villagers were shot and killed during the standoff.[11] On May 28, 1998, the company provided helicopter transport to the Nigerian Navy and Mobile Police (MOPOL) to their Parabe oil platform, which had been occupied by villagers who accused the company of contaminating their land. Soon after landing, the Nigerian military shot and killed two of the protesters, Jola Ogungbeje and Aroleka Irowaninu, and wounded 11 others. Chevron spokesperson Sola Omole acknowledged that the company transported the troops, and that use of troops was at the request of Chevron's management. The documentary, Drilling and Killing: Chevron and Nigeria's Oil Dictatorship, won the George Polk Award in 1998.

Michael Delli Carpini, dean of the Annenberg School for Communication, said, "She's not an editorialist. She sticks to the facts... She provides points of view that make you think, and she comes at it by saying: 'Who are we not hearing from in the traditional media?'"[12]

Goodman had been news director of Pacifica Radio station WBAI in New York City for over a decade when she co-founded Democracy Now! The War and Peace Report in 1996. Since then, Democracy Now! has been called "probably the most significant progressive news institution that has come around in some time" by professor and media critic Robert McChesney.[13]

In 2001, the show was temporarily pulled off the air, as a result of a conflict with a group of Pacifica Radio board members and Pacifica staff members and listeners. During that time, it moved to a converted firehouse from which it broadcast until November 13, 2009.[14] Democracy Now! subsequently moved to a studio located in the Chelsea neighborhood of Manhattan.[15]

Goodman credits the program's success to the mainstream media organizations who leave "a huge niche" for Democracy Now![13]

When President Bill Clinton called WBAI on Election Day 2000[16] for a quick get-out-the-vote message, Goodman and WBAI's Gonzalo Aburto challenged him for 28 minutes with human rights questions about Leonard Peltier, racial profiling, the Iraq sanctions, Ralph Nader, the death penalty, the North American Free Trade Agreement (NAFTA), the normalization of relations with Cuba, and the Israeli-Palestinian conflict. Clinton defended his administration's policies and charged Goodman with being "hostile and combative".[17]

During the 2008 Republican National Convention, several of Goodman's colleagues from Democracy Now! were arrested and detained by police while reporting on an anti-war protest outside the RNC.[18] While trying to ascertain the status of her colleagues, Goodman herself was arrested and held, accused of obstructing a legal process and interfering with a police officer,[19] while fellow Democracy Now! producers including reporter Sharif Abdel Kouddous were held on charges of probable cause for riot.[20] The arrests of the producers were videotaped.[21] Goodman and her colleagues were later released,[22] and City Attorney John Choi indicated that the charges would be dropped.[23] Goodman's (et al.) civil lawsuit against the St. Paul and Minneapolis police departments and the Secret Service resulted in a $100,000 settlement, as well as an agreement to educate officers in First Amendment rights of members of the press and public.[24][25][26]

On November 25, 2009, Goodman was detained for approximately 90 minutes at the Douglas border crossing into Canada while en route to a scheduled meeting at the Vancouver Public Library.[27] During an interview of her and her colleagues, Immigration officials asked questions pertaining to their intended topics of discussion at the meeting. They wanted to know whether she would be speaking about the 2010 Olympic Games to be held in Canada.[28]

"I was completely surprised by what he was asking and did not know what he was getting at. I'm an anti-sports fan," she told a CBC Radio interviewer. "At Democracy Now!, we don't cover sports much."[28]

Goodman was eventually permitted to enter Canada after the customs authorities took four photographs of her and stapled a "control document" into her passport demanding that she leave Canada within 48 hours.[28][29] MSNBC's Keith Olbermann commented: "If you‘re that desperate to prevent criticism of some Olympic games, you shouldn‘t detain a noted commentator and write her scripts for her."[30]

Dave Zirin of the Huffington Post quotes Derrick O'Keefe, co-chair of the Canadian Peace Alliance, as saying: "It's pretty unlikely that the harassment of a well-known and respected journalist like Amy Goodman about whether she might be speaking about the Olympics was the initiative of one over-zealous, bad-apple Canadian border guard. This looks like a clear sign of the chill that the IOC and the Games' local corporate boosters want to put out against any potential dissent."[31] 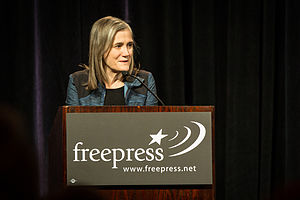 Goodman has received dozens[32] of awards for her work, including the Robert F. Kennedy Prize for International Reporting (1993, with Allan Nairn)[33] and the George Polk Award (1998, with Jeremy Scahill).[34] In 1999, she declined to accept the Overseas Press Club Award, in protest of the group's pledge not to ask questions of keynote speaker Ambassador Richard Holbrooke and because the OPC was honoring Indonesia for their improved treatment of journalists despite the fact that its forces had recently beaten and killed reporters in occupied East Timor.[35]

On October 2, 2004, Goodman was presented the Islamic Community Award for Journalism by the Council on American-Islamic Relations.[36] On November 18, 2004, she was presented the Thomas Merton Award.[37] In 2006 she received the Puffin/Nation Prize for Creative Citizenship.[38]

Goodman was a recipient of the 2008 Right Livelihood Award. The Right Livelihood Award Foundation cited her work in "developing an innovative model of truly independent grassroots political journalism that brings to millions of people the alternative voices that are often excluded by the mainstream media".[39]

On March 31, 2009, Goodman was the recipient, along with Glenn Greenwald, of the first Izzy Award (named after journalist I. F. "Izzy" Stone) for "special achievement in independent media". The award is presented by Ithaca College's Park Center for Independent Media.[40]

In May 2012, Goodman received an honorary Doctor of Letters degree from DePauw University in recognition of her journalistic work.[41] She also received the Gandhi Peace Award from Promoting Enduring Peace, for a "significant contribution to the promotion of an enduring international peace".[42][43]

On May 16, 2014, Goodman received an honorary Doctor of Letters degree from Purchase College, SUNY in recognition of her progressive journalism.

In February 2015, Goodman (along with Laura Poitras) received the 2014 I.F. Stone Lifetime Achievement Award from the Nieman Foundation for Journalism at Harvard.[44]