From Infogalactic: the planetary knowledge core
Jump to: navigation, search
This article is about the municipality in India. For its namesake district, see Anand district.

pronunciation (help·info)) is the administrative centre of Anand District in the state of Gujarat, India. It is administered by Anand Municipality. It is part of the region known as Charotar, consisting of Anand and Kheda Districts.

Anand is known as the Milk Capital of India. It became famous for Amul dairy and its milk revolution. This city hosts the Head Office of Gujarat Cooperative Milk Marketing Federation Ltd (AMUL), National Dairy Development Board of India,well known business school-IRMA and the Anand Agricultural University. Also other famous educational hub is Vallabh Vidhyanagar, an educational suburb of Anand which is home for around 10,000 students from all over the India.

Anand lies between Ahmedabad and Vadodara on the Western Railways, 101 km from the state capital Gandhinagar. It is a railway Junction and a broad gauge line from here runs to Godhra, covering Dakor, a major Hindu pilgrimage en route. MEMUs and one or two regular passenger trains ply on this route . It also has a branch line to Khambhat. DMUs Diesel Multiple Units ply on this route as it is not electrified yet. Anand Railway Station has 5 platforms, number 2,3,4 and 5 are on the main line and number 1 is on the branch line to Godhra. A new platform is in construction on the branch to Ahmedabad from the Godhra line forming a triangle. The National express highway from Ahmedabad to Vadodara also passes through Anand.

Anand has seen rapid economic growth along the Anand-Vallabh Vidya Nagar and Karamsad road belt. It is well on track to become a Municipal Corporation with the inclusion of various peripheral villages like Karamsad, Chikhodra, Lambhvel, V. V Nagar, Bakrol, Mogri and 20 others, however the major part of the town still lacks drainage system.[1]

Anand is located at Lua error in Module:Coordinates at line 668: callParserFunction: function "#coordinates" was not found..[2] It has an average elevation of 39 metres (127 feet). City has an area of 22.7 square kilometres. Urban area of the anand city is 172 square kilometers including 25 villages around the city. 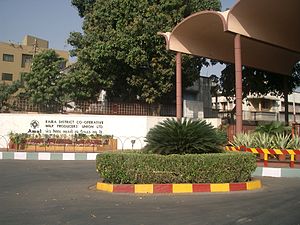 Economy of the Anand is very vibrant which ranges from farming to big scale industries. Major crops includes Tobacco and Banana. Anand is home to the famous AMUL Dairy.[5] Vitthal Udhyog Nagar, very big industrial belt is located on the outskirts of the city. Many famous industries including ELECON,Vulcan Industrial, Warm Steam, Charotar Iron Company, Milcent and Atlanta Electrics are situated in this industrial belt. Almost every other house in Anand has a person residing abroad.

First Deputy Prime Minister of the Republic of India, Sardar Vallabhbhai Patel was born in Karamsad, a suburb of Anand City.