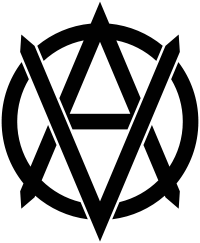 Veganarchy symbol; popularised by Brian A. Dominick's Animal Liberation and Social Revolution pamphlet in 1995. The front cover combined the 'V' from vegan with the anarchist 'A' symbol.[1]

The initials of the Animal Liberation Front with an anarchist circle-A incorporated into the design.

The anarchist philosophical and political movement has some connections to elements of the animal liberation movement. Many anarchists are vegetarian or vegan (or veganarchists) and have played a role in combating perceived injustices against animals. They usually describe the struggle for the liberation of non-human animals as a natural outgrowth of the struggle for human freedom.[2]

Leo Tolstoy (1828–1910) was a vegetarian, pacifist and Christian anarchist. In On Civil Disobedience he wrote: "A man can live and be healthy without killing animals for food; therefore, if he eats meat, he participates in taking animal life merely for the sake of his appetite. And to act so is immoral."

Veganarchism is the political philosophy of veganism (more specifically animal liberation) and anarchism, creating a combined praxis as a means for social revolution.[3][4] This encompasses viewing the state as unnecessary and harmful to animals, both human and non-human, whilst practising a vegan lifestyle. Veganarchists either see the ideology as a combined theory, or perceive both philosophies to be essentially the same.[5] It is further described as an anti-speciesist perspective on green anarchism, or an anarchist perspective on animal liberation.[4]

The term was popularised in 1995 with Brian A. Dominick's pamphlet Animal Liberation and Social Revolution, described as "a vegan perspective on anarchism or an anarchist perspective on veganism".[1] The 18-page pamphlet explains how many young anarchists in the 1990s had been adopting deep ecological (animal-inclusive and anti-speciesist) mindsets as part of an overall green anarchist political philosophy. Similarly animal liberationists were becoming increasingly influenced by anarchist thought and traditions, thus becoming veganarchists and adopting an overall praxis.[4]

Frequently, in the case of Animal Rights Militia (ARM), Animal Liberation Brigade (ALB) and Justice Department (JD) have carried out political violence against people. The allegedly decentralized and leaderless structure of the Animal Liberation Front could be seen as an example of anarchistic organizing, acting in autonomous, covert cells.

Rod Coronado is an eco-anarchist and is an unofficial spokesperson for the Animal Liberation Front and Earth Liberation Front. On February 28, 1992, Coronado carried out an arson attack on research facilities at Michigan State University (MSU), and released mink from a nearby research farm on campus, an action claimed by the ALF, and for which Coronado was subsequently convicted.

In 1997, the editors of Green Anarchist magazine and two British supporters of the Animal Liberation Front were tried in connection with conspiracy to incite violence, in what came to be known as the GANDALF trial.

Green anarchist Tre Arrow[6][7] was sought by the FBI in connection with an ELF arson on April 15, 2001 at Ross Island Sand and Gravel in Portland, torching three trucks amounting of $200,000 in damage. Another arson occurred a month later at Ray Schoppert Logging Company in Estacada, Oregon, on June 1, 2001 against logging trucks and a front loader, resulting in $50,000 damage.[8] Arrow was indicted by a federal grand jury in Oregon and charged with four felonies for this crime on October 18, 2002.[9] On March 13, 2004, after fleeing to British Columbia, he was arrested in Victoria for stealing bolt cutters and was also charged with being in Canada illegally.[10] He was then sentenced on August 12, 2008 to 78 months in federal prison for his part in the arson and conspiracy ELF attacks in 2001.[11][12]

In January 2006, Eric McDavid, a green anarchist,[13][14][15][16] was convicted of conspiring to use fire or explosives to damage corporate and government property.[17] On March 8, he formally declared a hunger strike due to the jail refusing to provide him with vegan food. He has been given vegan food off and on since.[18] In September 2007, he was convicted on all counts after the two activists he conspired with pled guilty testified against him.[17][19][20] An FBI confidential source named "Anna" was revealed as a fourth participant, in what McDavid's defense argued was an act of entrapment.[21] In May 2008, he was sentenced to nearly 20 years in prison.[22][23]

On March 3, 2006, a federal jury in Trenton, New Jersey convicted six members of SHAC, including green anarchist Joshua Harper,[24][25][26] for "terrorism and Internet stalking," according to the New York Times, finding them guilty of using their website to "incite attacks" on those who did business with Huntingdon Life Sciences HLS.[27] In September 2006, the SHAC 7 received jail sentences of 3 to 6 years.

In January 2009, veganarchist Daniel Wadham was sentenced to 5 years,[28][29] along with others six campaigners from SHAC UK who were sentenced to between 4 and 11 years. They were charged with waging a campaign of blackmail and intimidation against HLS, attempting to close down the animal testing laboratory by targeting the companies associates.[30]