Anarchism and violence have become closely connected in popular thought, in part because of a concept of "propaganda of the deed". Propaganda of the deed, or attentát, was espoused by a number of leading anarchists in the late nineteenth century, and was associated with a number of incidents of violence. Anarchist thought, however, is quite diverse on the question of violence. Some anarchists have opposed coercion, while others have supported it, particularly in the form of violent revolution on the path to anarchy.[1] Anarchism includes a school of thought which rejects all violence (anarcho-pacifism).

Many anarchists regard the state to be at the definitional center of structural violence: directly or indirectly preventing people from meeting their basic needs, calling for violence as self-defense.[2]

Perhaps the first anarchist periodical was named The Peaceful Revolutionist, a strain of anarchism has followed Tolstoy's pacifism.

Propaganda of the deed

Main article: Propaganda of the deed

Late in the 19th century, anarchist labor unions began to use the tactic of general strike. This often resulted in violence by both sides and some of the strikes even resulted in the deaths of striking workers, their replacements and security staff.

In this climate, some anarchists began to advocate and practice terrorism or assassination, which they referred to as propaganda of the deed. In many cases, newspapers blamed anarchist terrorism on immigrant naïvety, but scholar Richard Bach Jensen explained that "the emigrant experience may have heightened a pre-existing radicalism or given more precise configuration to its violent expression."[3] United States President William McKinley was assassinated by Leon Czolgosz, a registered Republican who, after his arrest, claimed he had been influenced by the writings of Emma Goldman and others. Czolgosz' actions were widely condemned by anarchists, but the media widely characterized Czolgosz as a typical anarchist even though he had never actually belonged to any anarchist organization.[citation needed] Goldman spoke sympathetically of him and described his act as the result of a violent society. Her defense of Czolgosz was met with open hostility from most of the anarchist press. 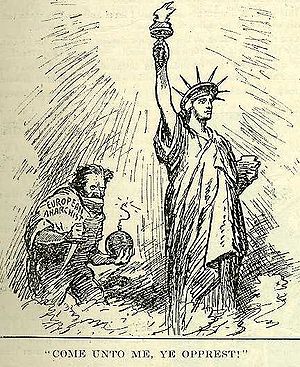 An American political cartoon, published in 1919, depicting a "European anarchist" preparing to destroy the Statue of Liberty.

Depictions in the press and popular fiction helped create a lasting public impression that anarchists are violent terrorists. This perception was enhanced by events such as the Haymarket Riot, where anarchists were blamed for throwing a bomb at police who came to break up a public meeting in Chicago. The writer J. R. R. Tolkien, in a letter to his son, briefly described anarchy "philosophically understood" as "meaning abolition of control not whiskered men with bombs."[4]

Blessed are the Peacemakers by George Bellows, The Masses, 1917.
See also: Anarcho-pacifism

Anarcho-pacifism (also pacifist anarchism or anarchist pacifism) is a form of anarchism which completely rejects the use of violence in any form for any purpose. Important proponents include Leo Tolstoy and Bart de Ligt. Mohandas Gandhi is an important influence.

Henry David Thoreau, though not a pacifist himself,[5] influenced both Leo Tolstoy and Mohandas Gandhi's advocacy of Nonviolent resistance through his work Civil Disobedience.[6]

At some point anarcho-pacifism had as its main proponent Christian anarchism. The first large-scale anarcho-pacifist movement was the Tolstoyan peasant movement in Russia. They were a predominantly peasant movement that set up hundreds of voluntary anarchist pacifist communes based on their interpretation of Christianity as requiring absolute pacifism and the rejection of all coercive authority.

As a global movement, anarchist pacifism emerged shortly before World War II in the Netherlands, Great Britain and the United States and was a strong presence in the subsequent campaigns for nuclear disarmament.

Anarchism encompasses a variety of views about violence. The Tolstoyan tradition of non-violent resistance is prevalent among some anarchists. Ursula K. Le Guin's novel The Dispossessed expressed this anarchism:

Odonianism is anarchism. Not the bomb-in-the-pocket stuff, which is terrorism, whatever name it tries to dignify itself with, not the social-Darwinist economic 'libertarianism' of the far right; but anarchism, as prefigured in early Taoist thought, and expounded by Shelley and Kropotkin, Goldman and Goodman. Anarchism's principal target is the authoritarian State (capitalist or socialist); its principle moral-practical theme is cooperation (solidarity, mutual aid). It is the most idealistic, and to me the most interesting, of all political theories.[8]

Other anarchists have believed that violence (especially self-defense) is justified as a way to provoke social upheaval which could lead to a social revolution. Errico Malatesta, an anarchist-communist, propounded that it is "necessary to destroy with violence, since one cannot do otherwise, the violence which denies [the means of life and for development] to the workers."[9] Anarchists with this view advocate violence insofar as they see it to be necessary in ridding the world of exploitation, and especially states. Emma Goldman included in her definition of Anarchism the observation that all governments rest on violence, and this is one of the many reasons they should be opposed. Goldman herself didn't oppose tactics like assassination in her early career, but changed her views after she went to Russia, where she witnessed the violence of the Russian state and the Red Army. From then on she condemned the use of terrorism, especially by the state, and advocated violence only as a means of self-defense.