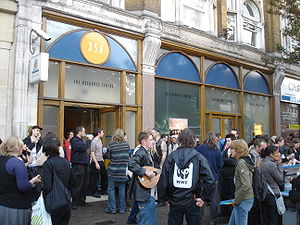 The Anarchist Bookfair is the name of several annual anarchist book fairs.

The British Bookfair started in 1983, and it has become the largest anarchist event in the British calendar,[1] and is a combination of stalls, talks and workshops by anarchist groups and campaigns.

The 2005 event ended with riot police[2] while the 2006 event was attended by the Libertarian Alliance group who were thrown out.[1] 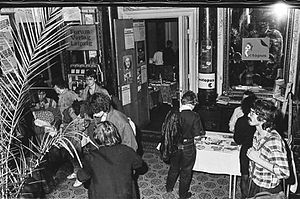 The First Alternative Book Fair in Leipzig[3] took place from March 11 to 14, 1990 in Leipzig-Gohlis in the clubhouse "Heinrich Budde" in parallel with the official Book Fair and offered the new East German publishers and German small and independent publishers a presentation possibility.[4]

Due to many years of censorship and often single publication possibility via samizdat some Leipzig authors and graphic designers have teamed up and sent to dpa and ADN invitations to an alternate Book Fair, followed by about 40 publishers reported.[5] For nearly 10-strong initiative group included Dieter Kalka, Benjamin Weinkauf,[6] Jayne-Ann Igel, Rosemarie Heinze, Sebastian Kleindienst, Matthias Seydewitz, Hermut Geppert, Peter Hinze and Katharina Luft. Concern was the newly established publishers in the GDR and small publishers an opportunity to present[7] to offer and to make known to each other publishers and authors. Therefore, there was a café for meetings and distributed throughout the day readings.[8] This idea was then taken over by Mrs. Renker for the Leipzig Book Fair and has proven to be Leipzig liest ("Leipzig Reads") established. A continuation of the alternatives Book Fair with the support of officials, as proposed by Ms. Renker,[9] rejected most publishers and the initiative group.[10] Special guest was the Chinese Xing Hu Kuo, he read "A Chinese in Bautzen - 2675 Nights in the stranglehold of the Stasi“, also Christian W. Staudinger with spontan actions and filming the Book Fair.[11][12]