Riseborough was born in Wallsend, Newcastle upon Tyne, the daughter of Isabel (née Johnson), a secretary, and George Riseborough, a car dealer.[2][3] She grew up in Whitley Bay, England. In reference to The Long Walk To Finchley, she has described her parents as "working class Thatcherites".[4]

At an early age, she appeared at the People's Theatre, Newcastle upon Tyne, in the play Riding England Sidesaddle by Christopher Goulding, as Celia Fiennes, and was a member of the Young People's Theatre for five years. Riseborough spent her schooldays at the independent school, Newcastle upon Tyne Church High School on Tankerville Terrace in Jesmond. She graduated from the Royal Academy of Dramatic Art in 2005. Andrea is a member of National Youth Theatre 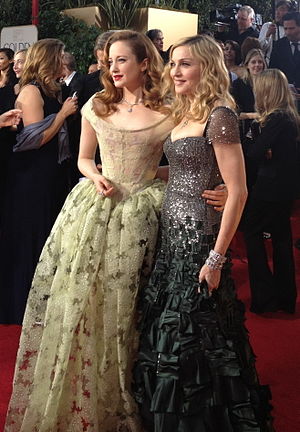 Riseborough and Madonna at the 69th Golden Globe Awards, 15 January 2012

She appeared in the 2010 films Made in Dagenham and Mark Romanek's adaptation of Never Let Me Go. She starred in the US premiere of Alexi Kaye Campbell's award-winning The Pride at the Lucille Lortel Theatre in January 2010.[5] The production was directed by Joe Mantello and co-starred Hugh Dancy and Ben Whishaw.

She appears in Rowan Joffe's film adaptation of Brighton Rock alongside Helen Mirren and John Hurt. She worked with The Devil's Mistress author Peter Flannery on his screenplay based on the life of Angelica Fanshawe with Michael Fassbender.[6]

Riseborough played the role of Wallis Simpson in W.E., a film directed by Madonna. She stars alongside Michael Sheen and Iwan Rheon in Resistance, an adaptation of an Owen Sheers novel. The film was released on 25 November 2011.[6]

She writes with her creative partner, the actor Tom Burke, and with Mike Leigh. Riseborough will star with Alexander Skarsgård in the upcoming thriller Hidden,[7] a low-budget film directed by Matt and Ross Duffer.[8]

She appeared alongside Tom Cruise in Oblivion (2013), in a supporting role.[9]

She co-starred in the acting ensemble of Birdman, which won the Oscar for Best Picture at the 87th Academy Awards. Riseborough also shared the Screen Actors Guild Award for Outstanding Performance by a Cast in a Motion Picture for the film.

Riseborough will star as Rosalind in Shakespeare's As You Like It at the National Theatre's Olivier stage in November 2015. Polly Findlay will direct.[10] (Riseborough has withdrawn from the cast for personal reasons.) [11]

She will co-star opposite Steve Coogan in apartheid drama Shepherds and Butchers, which begins shooting June 15, 2015 in South Africa.[12][13]

Riseborough joined the cast of Netflix's Bloodline for Season 2, as a series regular character, Evangeline. [14][15]

In 2009 she was nominated for a BAFTA TV Award for playing the title character in Margaret Thatcher: The Long Walk to Finchley. She won the Royal Television Society Award and The Broadcasting Press Guild for her role in The Devil's Whore. In 2007 she won the Ian Charleson Award for her performances as Isabella in Measure For Measure and as the title character in Miss Julie both directed by Sir Peter Hall. She was nominated as London Newcomer of the year at the 2005 Theatre Goers Choice Awards for A Brief History of Helen of Troy at the Soho Theatre. In 2007 she was nominated for a Lucille Lortel Award and a Drama Desk Award for Outstanding Featured Actress in a Play for her performance in The Pride. She was nominated at the 2008 Theatre Goers Choice Awards[17] for Best Supporting Actress in a Play for The Pain and the Itch. Riseborough was a recipient of the Shooting Stars Award from the 2011 Berlin International Film Festival. For her performance in W.E. she was honored with the Hollywood Film Festival Spotlight award.[18] Riseborough won the Best Actress award at the British Independent Film Awards 2012 for the role of Colette McVeigh in the film Shadow Dancer.[19]