Andrew Lang (1844–1912) was a Scots poet, novelist, and literary critic. As acknowledged in the prefaces, although Lang himself made most of the selections, his wife and other translators did a large portion of the translating and retelling of the actual stories.

According to Anita Silvey, "The irony of Lang's life and work is that although he wrote for a profession—literary criticism; fiction; poems; books and articles on anthropology, mythology, history, and travel…he is best recognized for the works he did not write."[1] 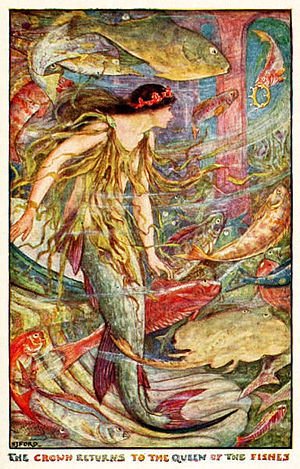 "The Crown Returns to the Queen of the Fishes" Illustration by H. J. Ford for Andrew Lang's The Orange Fairy Book

The most well-known volumes of the series are the twelve Fairy Books, each of which is distinguished by its own color. Although Lang did not collect any fairy tales himself from oral primary sources, only he and Madame d'Aulnoy (1651–1705) have collected tales from such a large variety of sources. These collections have been immensely influential. Lang gave many of the tales their first appearance in English. As acknowledged in the prefaces, although Lang himself made most of the selections, his wife and other translators did a large portion of the translating and retelling of the actual stories.

Lang's urge to gather and publish fairy tales was rooted in his own experience with the folk and fairy tales of his home territory along the English-Scottish border. At the time he worked, English fairy-tale collections were rare: Dinah Maria Mulock Craik's The Fairy Book (1869) was a lonely precedent. When Lang began his efforts, he "was fighting against the critics and educationists of the day", who judged the traditional tales' "unreality, brutality, and escapism to be harmful for young readers, while holding that such stories were beneath the serious consideration of those of mature age".[2] Over a generation, Lang's books worked a revolution in this public perception.

The series was immensely popular, helped by Lang's reputation as a folklorist, and by the packaging device of the uniform books. The series proved of great influence in children's literature, increasing the popularity of fairy tales over tales of real life.[3] It inspired such imitators as English Fairy Tales (1890) and More English Fairy Tales (1894) by Joseph Jacobs. Other followers included the American The Oak-Tree Fairy Book (1905), The Elm-Tree Fairy Book (1909) and The Fir-Tree Fairy Book (1912), series edited by Clifton Johnson and the collections of Kate Douglas Wiggin and Nora Archibald Smith.

Some of Lang's collected stories were included without any attribution at all (e.g., "The Blue Mountains"), and the rest are listed with brief notes. When this is "Grimm" or "Madame d'Aulnoy" or attributed to a specific collection, the stories can be tracked down, but other notes are less helpful. For instance, "The Wonderful Birch" is listed only as "From the Russo-Karelian".

Lang repeatedly explained in the prefaces that the tales he told were all old, and not his, and that he found new fairy tales no match for them:

But the three hundred and sixty-five authors who try to write new fairy tales are very tiresome. They always begin with a little boy or girl who goes out and meets the fairies of polyanthuses and gardenias and apple blossoms: "Flowers and fruits, and other winged things". These fairies try to be funny, and fail; or they try to preach, and succeed. Real fairies never preach or talk slang. At the end, the little boy or girl wakes up and finds that he has been dreaming.

Such are the new fairy stories. May we be preserved from all the sort of them!

The collections were specifically intended for children, and, as Lang explained in the prefaces to the books, bowdlerised. J.R.R. Tolkien, in his essay "On Fairy-Stories" (1939) stated that while he appreciated the collections, he objected to his editing the stories for children. He also criticized Lang for including stories without magical elements in them, with "The Heart of a Monkey" given as an example. Here, unlike "The Giant Who Had No Heart in His Body" or other similar stories, the monkey merely claims that his heart is outside his body. However, many fairy tale collectors include tales with no strictly marvelous elements.[citation needed]

The first edition consisted of 5000 copies, which sold for 6 shillings each. The book assembled a wide range of tales, with seven from the Brothers Grimm, five from Madame d'Aulnoy, three from the Arabian Nights, and four Norwegian fairytales, among other sources.[4] The Blue Fairy Book was the first volume in the series and so it contains some of the best known tales, taken from a variety of sources.

It appeared at Christmas 1890 in a first printing of 10,000 copies. Sources include French, Russian, Danish, and Romanian tales as well as Norse mythology. 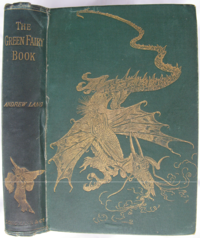 In his Preface to this volume, Lang expressed the view that it would be "probably the last" of the collection. Their continuing popularity, however, demanded subsequent collections. In The Green Fairy Book, the third in the series, Lang has assembled stories from Spanish and Chinese traditions. 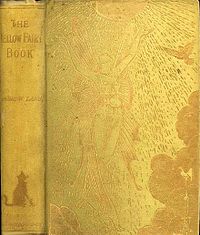 Its initial printing was 15,000 copies. The Yellow Fairy Book is a collection of tales from all over the world. It features many tales from Hans Christian Andersen.

Contains thirty true stories, mainly drawn from European history. Includes the life of Joan of Arc and the Jacobite uprising of 1745.

Contains sixty-five stories about animals. Some of them are simple accounts of how animals live in the wild. Others are stories about pets, or remarkable wild animals, or about hunting expeditions. Many are taken from Alexandre Dumas.

Contains thirty-four stories from the Arabian Nights, adapted for children. The story of Aladdin is in this volume as well as in the Blue Fairy Book.

Contains forty-six stories about real and mythical animals. Some of them are simple accounts of how animals live in the wild. Others are stories about pets, or remarkable wild animals, or about hunting expeditions.

Thirty-five stories, many from oral traditions, and others from French, German and Italian collections.

Roumania, Japan, Serbia, Lithuania, Africa, Portugal, and Russia are among the sources of these 35 stories that tell of a haunted forest, chests of gold coins, a magical dog, and a man who outwits a dragon.

These 36 stories originated in Hungary, Russia, Finland, Iceland, Tunisia, the Baltic, and elsewhere.

The Brown Fairy Book contains stories from the American Indians, Australian Bushmen and African Kaffirs, and from Persia, Lapland, Brazil, and India. 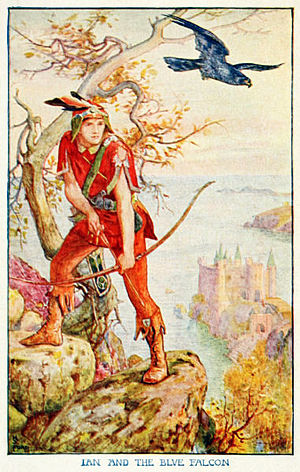 The Olive Fairy Book includes unusual stories from Turkey, India, Denmark, Armenia, the Sudan, and the pen of Anatole France. 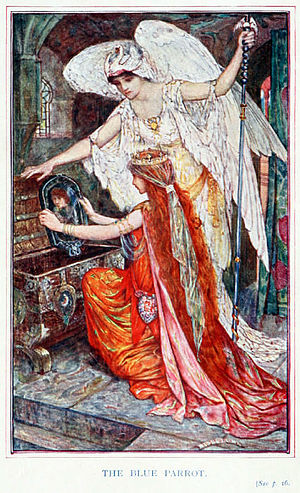 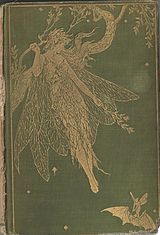 The Book of Princes and Princesses (1908)

Contains fourteen stories about the childhoods of European monarchs, including Napoleon, Elizabeth I, and Frederick the Great.

Contains twenty-three stories about saints. Most of these are true stories, although a few legends are also included.

Published after Andrew Lang's death, with an introduction by Mrs. Lang. Contains thirty-four stories on a variety of subjects, including ghost stories, Native American legends, true stories, and tales from Washington Irving.