Andrew James Viterbi (born Andrea Giacomo Viterbi; March 9, 1935) is an American electrical engineer and businessman who co-founded Qualcomm Inc. and invented the Viterbi algorithm. He is currently Presidential Chair Professor of Electrical Engineering at the University of Southern California's Viterbi School of Engineering, which was named in his honor in 2004 in recognition of his $52 million gift.

Viterbi was born in Bergamo, Italy to Italian Jewish parents and emigrated with them in 1939 to the United States as a refugee because of the Italian racial laws. His original name was Andrea, but when he was naturalized in the US, his parents anglicized it to Andrew.

Viterbi attended the Boston Latin School, and then entered MIT in 1952, studying electrical engineering. He received both BS and MS in Electrical Engineering in 1957 from MIT.

He worked at Raytheon and later at Jet Propulsion Laboratory in Pasadena, where he started working on telemetry for guided missiles, also helping to develop the phase-locked loop. Simultaneously, he was carrying out a PhD study at the University of Southern California, where he graduated in 1963 in digital communications.[2]

After receiving his Ph.D., he applied successfully for an academic position at University of California, Los Angeles (UCLA).

Viterbi was later a professor of electrical engineering at UCLA and UCSD. In 1967 he proposed the Viterbi algorithm to decode convolutionally encoded data. It is still used widely in cellular phones for error correcting codes, as well as for speech recognition, DNA analysis, and many other applications of Hidden Markov models. On advice of a lawyer, Viterbi did not patent the algorithm.[3] Viterbi also helped to develop the CDMA standard for cell phone networks.

Viterbi was the cofounder of Linkabit Corporation, with Irwin Jacobs in 1968, a small military contractor. He was also the co-founder of Qualcomm Inc. with Dr. Jacobs in 1985. As of 2003[update], he is the president of the venture capital company The Viterbi Group. He continues to be involved in wireless communications technology companies as a strategic advisor to Ingenu's board of directors.[4] 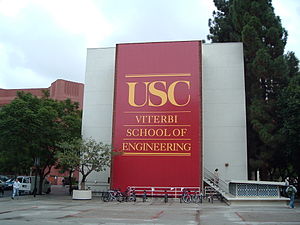 In 1998 he was one of the few receiving a Golden Jubilee Award for Technological Innovation from the IEEE Information Theory Society. Viterbi earned it for "the invention of the Viterbi algorithm".[5] In 2002, Viterbi dedicated the Andrew Viterbi '52 Computer Center at his alma mater, Boston Latin School. On March 2, 2004, the University of Southern California School of Engineering was renamed the Viterbi School of Engineering in his honor, following his $52 million donation to the school.[6] He is a member of the USC Board of Trustees.[7]

He is also on the Board of Trustees at The Scripps Research Institute.

He is also founding member of ISSNAF (The Italian Scientists and Scholars in North America Foundation).

In 2005, he was awarded the Benjamin Franklin Medal in Electrical Engineering.

In September 2008, he was awarded the National Medal of Science for developing "the 'Viterbi algorithm', and for his contributions to Code Division Multiple Access (CDMA) wireless technology that transformed the theory and practice of digital communications".

In 2010, he received the IEEE Medal of Honor and in the same year he also received the IIC Lifetime Achievement Award by the Italian Cultural Institute of Los Angeles. In 2011, he received the John Fritz Medal from the American Association of Engineering Societies.[9]

Viterbi is married to Erna Finci, with whom he had three children. His son, Alexander, died of a heart attack at the age of 40 in November, 2011.[10]